Syonia is the femslash ship between Genocide Jack and Sonia Nevermind from the Danganronpa fandom.

While the two have never met in canon, Sonia does mention the murderous fiend at one point in the second chapter of Danganronpa 2: Goodbye Despair. While searching through the library, Hajime Hinata finds Sonia reading an article about serial killers, featured in the latest issue of Occult Magazine. Sonia points out that Genocide Jack is mentioned in the article, while noting that the author has very good tastes. When Hajime says that he feels like he heard that name before, Sonia happily goes into greater detail about Genocide Jack, displaying a strong interest in her. Afterwards, the two are confronted by Peko Pekoyama, who asks them why they are so enthusiastically talking about mere murderers. Sonia defensively tells her that it is a mistake to refer to them as mere murderers, and that she is intrigued by how the value system of serial killers differ from the norm.

The two share one event together in Ultimate Talent Development Plan, where Sonia has an exclusive interview with the serial killer. Sonia blushes as she remarks to Genocide Jack that she is sincerely grateful they were able to come. During the interview, Jack is surprised by how much Sonia knows about her, and is somewhat creeped out, but says that she can forgive her for reading up on her. Sonia apologizes, and says that she was just so eager to meet her. Jack laughs in response, finding it hilarious how Sonia views her as some kind of star. After a while, Jack suddenly sneezes and reverts back to her other self, Toko Fukawa. Leaving Sonia saddened that she won't be able to hear anymore juicy information from the murderous fiend.

The two share another event together in Danganronpa S: Ultimate Summer Camp. During their event, Genocide Jack asks Sonia who could even conceive a scenario in which a serial killer frolics in broad daylight, to which Sonia asks if she didn't cease her crimes some time ago. Sonia then says that she can't ignore her past, but that it also feels wrong to think of her as a serial killer now. Jack asks Sonia if she's trying to deny her of her identity, before admitting that she hasn't actively committed any murders recently. However, Jack insists that she hasn't retired from killing, and Sonia is fascinated by Jack holding back her urge to kill. Jack states that it's a messed up world for people to want to be friends with a serial killer.

“Genocide Jack is an alleged Japanese serial killer who has a reputation even among casual internet users. She is very popular among youths and is known for writing messages in blood at the scene of the crime. Apparently she is a high school or middle school student who wears a sailor uniform. Be careful Hajime.”
— Sonia explaining Genocide Jack to Hajime.

“Genocide Jack... You have my sincerest gratitude for coming here today!”
— Sonia showing gratefulness that Genocide Jack was able to come to her interview.

“Pfft! What? You make it sound like I'm a star or something! That's hilarious!”
— Genocide Jack amused at how much Sonia idolizes her.

“Holding back your urge to kill... The passion of a serial killer never fails to fascinate me...”
— Sonia fascinated by Genocide Jack's self-resistence.

The ship sailed due to Sonia's fascination with serial killers, as well as displaying a particular interest in Genocide Jack. Some fans like to believe that Sonia considers Jack her idol, with their event in Ultimate Talent Development Plan further supporting this. The fact that Genocide Jack only kills men also indicates that she wouldn't attempt to harm Sonia. The ship is considered a rarepair in the fandom, and it easily loses to some of both characters' more popular shipping choices, like Sondam and Soniaki for Sonia, and Syomaru for Genocide Jack. However, the ship does still have a small group of fans who truly adore it. 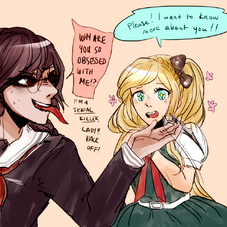 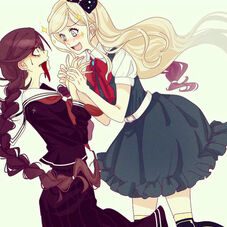 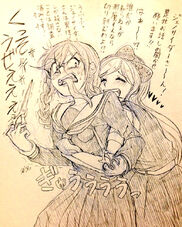