• Birds of a Feather
• One Head Taller – Wilbur is 6'6 while Quackity is 5'8.
DREAM SMP
• Enemies to Lovers
• Like an Old Married Couple
• Mistaken for Gay – by Tommy
• Ship Tease
• Unresolved Sexual Tension

TNT Duo is the slash ship between Quackity and Wilbur Soot from the YouTube fandom.

The two are friends of the Dream Team and often get involved in lore on the Dream SMP server. They have been on the same Minecraft Championship team a couple times. Both are able to play guitar. Both are also known for wearing beanies, though Quackity is more well known for it since he's wears a beanie more often. They sometimes collaborate with each other and other content creators. Recently, they have had an IRL wine stream together.

The two were opposing parties during the POG2020 vs SWAG2020 election of L'manberg. Wilbur was running for president on the POG2020 side of the election. Quackity ran also ran for president on the SWAG2020 side just for the sake of making sure Wilbur had some competition. Even though they were on opposite sides of the election, they were still friends and had a positive relationship.

In the Pogtopia days, Wilbur and Quackity were seen at Niki's Birthday Party, where the two continued to flirt throughout the night despite Quackity dating Karl at the time, Wilbur even going as far as kissing and biting Quackity's neck, singing him a love song ("I'm in Love with a Big Q", parody of "I'm in Love with an E-Girl"), and so on.

Wilbur died after blowing up L'manberg for the first time with TNT. Quackity also used TNT to blow up Purpled's UFO. This is what makes the two known as the TNT Duo. After seeing Purpled's blown-up UFO, Wilbur commented that someone must have copied him.

Wilbur saw the book after being revived by Dream. Wilbur brought TommyInnit with him and they both explored Las Nevadas with Quackity as their guide. Wilbur agreed to working alongside Quackity, though Quackity revealed that he actually wanted to work with TommyInnit. Wilbur was bitter about this and started arguing with Quackity. He declared that he would start a new, better nation right next to Las Nevadas. Both Quackity and Wilbur wanted Tommy to work with them, which caused their rivalry to grow. While Wilbur and Quackity argued, Tommy pointed out the tension between them and viewed their interactions as flirting.

The shipping between the two most likely started when TommyInnit pointed out in a live stream how their interactions could be seen as romantic. Most people only ship Quackity and Wilbur's Dream SMP characters since Quackity has said he is uncomfortable with being shipped with his friends in real life. A lot of people only ship Quackity's characters with "Alivebur", "Revivedbur" or "Vilbur" instead of with Wilbur's ghost counterpart, Ghostbur. The ship is rivaled by the very popular Karlnapity ship and their respective ships with GeorgeNotFound, QuackityNotFound and Georgebur. There are many that prefer the ship as a friendship instead of a slash ship.

On Twitter, people are a part of "tnttwt," a subtwt in which people are interested in the TNT Duo. The Tumblr counterpart is called "tntblr". 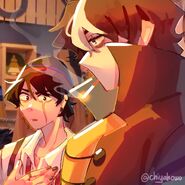 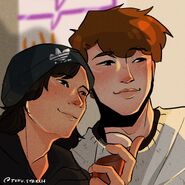