Tailouge is the het ship between Tails and Rouge from the Sonic the Hedgehog fandom.

Tails and Rouge had their first meeting in Sonic Adventure 2. The two did not meet until the final story, where the two along with Sonic, Knuckles and Eggman teamed up in order to get into the Cannon Core, where they planned to neutralize the Chaos Emeralds in an attempt to stop the Space Colony ARK from falling.

After Tails and Emerl failed to enter the Central Lab in Sonic Battle, Rouge appeared before them and challenged them to a fight wagering her lab pass. After being defeated, the two-tailed fox gloomily asked the bat what she wanted them to do, in which she answered by kissing him on the cheek, teasing him, and lending him her lab pass anyway, claiming that she had a good time.

The two had another encounter in Sonic Heroes, when their teams had a team battle in Lost Jungle. Both Tails and Rouge were the flight formations of their respective teams. The two later teamed up with other heroes in the final battle against Metal Sonic, where Rouge, along with the rest of Team Dark, distracted Metal Sonic, after which Tails and the rest of Team Sonic fought against the transformed Metal Overlord in their "super" forms.

Tails and Rouge met again in Sonic the Hedgehog, where the two found themselves stuck in the future along with Sonic, Knuckles and Shadow. The five teamed up in order to find two Chaos Emeralds, which they could use to get back in time. After Tails and Rouge returned to the present, they parted ways. They later met when Mephiles fused with Iblis and sent the two along with other characters to a mysterious place, where they found Sonic dead. The two, along with five others, went to look for the Chaos Emeralds, which they then used to resurrect Sonic.

In Sonic Generations, Tails and Rouge were among the guests attending Sonic's birthday party. The two were also cheering Sonic on during the final battle against the Time Eater.

Tails and Rouge fought together against Infinite in Sonic Forces.

In "Prize Fights", Rouge and Tails fought each other in the second round of the martial arts mash-up. As Tails swoops towards the bat, she subdues the two-tailed fox, kisses him on the cheek, and throws him off the ring, winning the match. Rouge then teasingly apologizes to Tails for "smooching and running" and says she is going to touch up her lipstick right after that fight.

In the next episode, Scarlet and Tails presided over the quarter- and semifinal matchups, especially between Knuckles and Rouge. Tails describes the bat's sonar sense as an advantage against the echidna, and the latter winning the semi-final match after her collapse.

This ship is fairly popular. It is only superseded by Tailsmo and Taiream for Tails, and Knuxouge and Shadouge for Rouge. Due to the scene of Rouge giving Tails a kiss in Sonic X, it inspired fans to depict them kissing in their fan art and fictions. 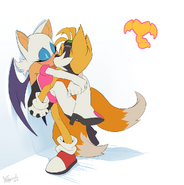 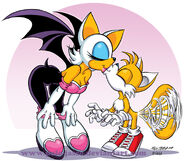 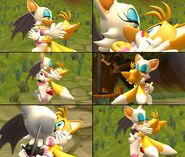 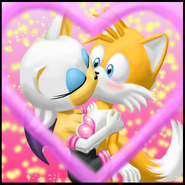 Retrieved from "https://shipping.fandom.com/wiki/Tailouge?oldid=287271"
Community content is available under CC-BY-SA unless otherwise noted.