Tailrine is the het ship between Tails and Marine from the Sonic the Hedgehog fandom.

Tails and Marine met in Sonic Rush Adventure after Sonic and Tails accidentally ended up on Southern Island in the Sol Dimension. Marine claimed she saved them and invited the two to stay at her home until they found a way back to their home. The next day, Marine took her ship, the SS Marine, out on its maiden voyage but it crashed. Tails offered to build Marine a new boat. Sonic and Tails built the Wave Cyclone, which they used to go to nearby islands to look for Materials. During their journeys, Tails helped her build ships for their adventures. Marine declared herself captain and made Tails her assistant, although he never agreed to it.

Marine claimed she was looking after Tails' well-being, when in reality it was the other way around. Marine admired Tails' intellect, although she often ignored his advice, saying he was "no fun". It was later revealed Tails thought of Marine as a nuisance. Marine felt betrayed by this, calling him stupid, but the two later made up. The two separated when Sonic and Tails went back home with the SS Tornado EX. She was sad to see them go, and cried when they left. Marine told Tails he was one of her best friends ever and vowed to meet him again.

In the Nintendo DS version of Sonic Colors, Tails and Blaze met on Sweet Mountain. Tails asked her how Marine was, and Blaze explained to him she was "same as ever", meaning she was still getting into trouble.

In both the Pre-Super Genesis Wave and Post-Super Genesis Wave Archie comics, Tails and Marine had a similar first meeting to the one in Sonic Rush Adventure, with no known further interactions. The two also appeared together in the Sonic Comic story "Burning Beauty", where the two tried to get Blaze to light up a bonfire, which she eventually agreed to do.

While not the most popular pairing for Tails, Tailrine is fairly popular. It is commonly shipped alongside Sonaze as Marine parallels Tails in a similar way Blaze parallels Sonic. Tails and Marine are also the younger best friends of Sonic and Blaze, respectively.

On AO3, it is the most written ship for Marine, but that is not saying much, as Marine ships are generally rare. 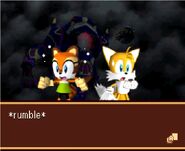 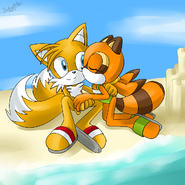