Tailsey is the het ship between Tails and Zooey from the Sonic Boom fandom.

In “Battle of the Boy Bands”, Zooey was one of many Justin Beaver fangirls. In reality, this was due to a mind-control frequency set up by Dixon with the objective to control all the females in the unnamed village. She attended a Justin Beaver concert in which Tails’ band, Dreamboat Express, challenged him to a sing-off. Zooey and the other fangirls were freed from the mind control after Sonic used a counter-frequency on Justin, then cheered on Tails’ band under a new name, Dude-itude.

In “Tails’ Crush”, Tails started to have a crush on Zooey during one of her daily routines. They had several encounters, during each of which Tails acted to act cool, romantic, manly or ritualistic towards her in awkward ways, when he only wanted to talk to her. This made Zooey feel uncomfortable. Later on, Zooey was captured by Eggman’s Giant Robot, and was rescued by Tails. Zooey, now returning the feelings, kissed him. Disappointed by his loss, Eggman played romantic music while Tails and Zooey held hands.

In “Robot Battle Royale”, Zooey came to see a local robot battle where Eggman defeated Tails in the final round.

Tails and Zooey remained in a relationship afterwards, although Tails spent more time with his team. One time, when Tails had to leave on a mission with his team, Zooey came to see him off at the outskirts of the village. At another time, Zooey helped Tails and his teammates fight malware-infected robots who were invading the village.

In “Three Men And My Baby!”, Tails, along with Sonic and Knuckles, had to take care of Chumley, the younger son of Lady Walrus. The three walked by Zooey, Perci, and Staci, who were moved by the sweet sight of them taking care of the baby. Many episodes later, Race Day arrived, and Tails participated in the event while Zooey watched it.

The pairing is fairly popular, with plenty of fanart. It is Zooey’s most popular ship due to her first major appearance in “Tails’ Crush”. As Zooey is a Sonic Boom character, the ship is mostly popular among fans of the show. Even before Zooey’s role as Tails’ crush was revealed, it was speculated that Zooey would be Tails’ love interest after the aforementioned episode title was revealed and due to her appearing in the background in a past episode.

However, as Zooey was only introduced in 2015 (over 20 years after Tails’ debut), many fans already had a pre-established ship for Tails before Zooey’s introduction. As such, it has many rival ships on Tails’ side, such as with Cosmo or with Cream. Some fans of other Tails pairings tend to pair Zooey with another Sonic Boom character such as Justin Beaver. Some also think Zooey is too undeveloped as a character and dislike her being introduced just to be Tails’ girlfriend. Other rival ships for Tails within Sonic Boom is with Amy, with Sticks, or with Perci.

On AO3, it is one of the only two ships for Zooey, the other being a polyship involving the two and Cosmo. However, it does not have many fan works and is not among the top ships for Tails or the Sonic Boom fandom. The ship is more popular on DeviantArt, where a fanclub dedicated to them has over 100 members.

A few fans have been making art of Zooey with Modern Tails as well. Such examples include by J. Russell (archived copy), LilacLisianthus, and Nico--Neko (tweet). 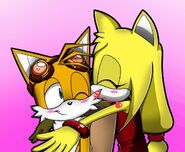 ZOOEY AND TAILS VS GOOGLE - (Ft Tails And Sonic Pals)