Tailsmo is the het ship between Tails and Cosmo from the Sonic X fandom.

When the Marmolims celebrate after Tails brought out groundwater in "The Planet of Misfortune", Cosmo was standing on the cliff near the city. Tails comes close to her and asks what's wrong. Cosmo replies as if nothing was wrong and simply greets him. The fox admires the teamwork they have done in the past, but Cosmo admits she did not do anything and blushes. Tails tells her she was the key to defeating the Metarex and walks away. When Cosmo begs him to come back, she trips on a rope and indirectly hugs the fox. Instantly, a springboard sets off and the two fell on the Lake of Love. Tails asks her if she is alright, and Cosmo replies positively then asks about the trap. They immediately gaze on the planet's moon, much to Amy's ranting behind them.

In the Japanese version of the second last episode, when it's up to him to fire the Sonic Power Cannon, Tails was extremely hesitant to do so, but with the help of Eggman's reassurance, Tails screamed "I love you, Cosmo!" just before he fired the cannon towards her and Dark Oak, and although in the English version he never bluntly used those words, it is strongly implied throughout the episode that Tails simply didn't have the courage, even at the end, to admit that he loved her. Cosmo admitted in the original Japanese that she will always love Tails before dying, while in the English dub she said that will never forget him.

Tails and Cosmo have a cameo in issue 5 of the comics when Chuck discusses life on other planets to Chris and his friends at some point in the past.

Tailsmo is a very popular ship in the Sonic fanbase and one of the most popular pairings for Tails, alongside Tails with Cream and Boom!Tails with Zooey.

It mainly has a rivalry with Taiream in fandom, as people who shipped Cream and Tails together were pretty upset with the arrival of Cosmo. Many of them hated on her due to her canonical romance with Tails, even if there is not any official romantic hints between fox and rabbit in the general series.

Some fan works include Skye and Melody Prower (Tails and Mina Mongoose's children in Light Mobius from the Pre-Super Genesis Wave universe) as Cosmo's children instead of Mina's. In this case, Melody is changed from a mongoose to a seedrian, a fan term for Cosmo's species.

Both Tailsmo and Taismo are frequently used names for the ship. One name might have originated as a misspelling of the other but it is unclear if this is the case. One possibility is that the original "Taismo" was replaced with the increasingly popular "Tailsmo" due to the latter being a more seamless transition between the two characters' names. 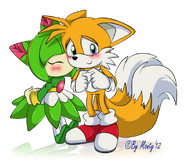 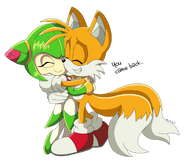 by Peter-the-Gamer1992
Add a photo to this gallery

Retrieved from "https://shipping.fandom.com/wiki/Tailsmo?oldid=326926"
Community content is available under CC-BY-SA unless otherwise noted.