Allies; both are dead

“She is a great person... so I respect her.”
— Shinobu to Kanao about Tamayo (manga).

TamaShino is the femslash ship between Shinobu Kocho and Tamayo from the Demon Slayer fandom.

Even though she rarely shows it, Shinobu has a strong hate for demons, so initially Shinobu harbored little trust in Tamayo due to her status as one, however, upon being requested and offered by Kagaya Ubuyashiki to help the Demon Slayer Corps to kill Muzan once and for all and Tamayo accepting his offer, she was immediately introduced and set to work with Shinobu due to her own immense skills in drugs and poisons working well with the Insect Hashira's own.

Initially there was little trust between the two, with Tamayo being initially scared of trusting a Demon Slayer, especially a Hashira due to her status as a demon, and Shinobu's own paranoia and prejudice against her for being a demon. However, eventually through their work together in creating the humanization drug and anti-Kibutsuji concoction, the two developed a genuine sense of friendship and respect for each other, with Tamayo being genuinely impressed by Shinobu's talent in poisons and Shinobu being seemingly touched by the demoness's attempts to make up for her past actions and her being impressed by the latter's immense skills as a doctor.

It was also revealed that Tamayo also had a hand in personally modifying Shinobu's body in preparation for her duel and eventual death against Upper Rank 2 Doma in order to fulfill her vengeance for her older sister Kanae Kocho, showing just how much she had come to trust Tamayo: to the point of allowing her to personally alter and modify her body, which could potentially damage/destroy her body. Despite this, Shinobu mentions she found it annoying that she couldn't create the poison to defeat Upper Rank 2 Doma on her own.[1]

TamaShino isn't a very well known ship within the community, and most commonly deemed as a "rare pair/crack ship", due to their lack of interaction and as it tends to get overshadowed by other more popular ships such as GiyuShino for Shinobu and YushiTama for Tamayo. Many people often prefer to view them as sisters/relatives due to their similar appearance and to some extent, personality. Nonetheless, it still has it's fair amount of shippers, as it's the sixth most written ship for Shinobu and most likely the second most written ship for Tamayo. A considerable amount of fanarts are provided by the fandom, as well as official artwork featuring the two. 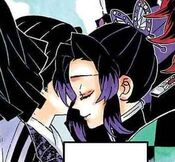