Married (Pre-Timeskip)
Both are deceased (Post-Timeskip)

TanKana is the het ship between Tanjiro Kamado and Kanao Tsuyuri from the Demon Slayer fandom.

Tanjiro and Kanao met for the first time on the Final Selection Exam, being two of the five only survivors. However, they never arrive to interact there, and both of them set off separately.

The next time they meet is on the Natagumo Mountain Arc, where Kanao knocks out Tanjiro in order to kill Nezuko. After Kagaya Ubuyashiki orders to capture both siblings alive, she stops attacking her and is seen helping the Kakushi to rescue the injured people.

After Tanjiro's trial and Shinobu's decision to keep him on the Butterfly Estate, Tanjiro sees Kanao surrounded by butterflies and quickly recognizes her as the girl from the Final Selection Exam. After Aoi Kanzaki guides him and his escorts inside the place, Kamado stares at Tsuyuri and she does the same.

Kanao, alongside Aoi, Sumi, Kiyo, and Naho, helps Tanjiro, Zenitsu, and Inosuke on their recovery training with taking part in the cup game and the tag game. She's always the winner against the three of them, and Tanjiro comments that she's strong and quick. He only starts winning against her on both games when he starts practicing the Total Concentration Breath after Sumi, Kiyo and Naho's recommend him to practice it and he then increases his speed and stamina thanks to it, matching his strength with Kanao's. Although they interact in the training sessions, Tanjiro and Kanao never have a proper conversation. This is seen when Kanao looks from the distance at the three guys, holding the coin Kanae gave her to make decisions and struggling with her inner desires of wanting to talk with them but unable to do it by her own. She remembers what Kanae said one day; that she would fall in love with a person who would open her heart, making the coin not useful anymore, and saddened by that she walks away, not before giving a peek to Tanjiro.

The first time they actually talk it's when Tanjiro, Zenitsu, and Inosuke are fully recovered and have to head on their next mission. Tanjiro says goodbye to all the people on the Butterfly Estate, and one of them is Kanao, who flips her coin to decide if she answers Tanjiro or not. When she says goodbye to him, Tanjiro asks her why does she flip the coin, and Kanao explains to him that she can't make decisions on her own so she uses the coin instead. Tanjiro says that she should follow her heart, and then he flips the coin for her, saying that the result would determine if she should listen to her heart or not from now on; since the coin lands on heads, meaning that she will be able to make her own decisions, Tanjiro gets happy and grabs Kanao's hands to say her that now she can live the life she desires.

Before Kanao could reply to this, Tanjiro waved her goodbye and ran off over the garden, but she asks him how did he do it (thinking that he used tricks), but he only smiles at her and says that it was all a matter of luck. He leaves, and Kanao's eyes shine for the first time while she watches him running (this only happens on the anime).

After Tanjiro comes back from the red light district mission, he is unconscious for weeks. When he wakes up, Kanao drops a jar from the emotion and tells him she is so glad he is awake. She also yells at Inosuke and Aoi and tells them to be quiet because Tanjiro has fallen asleep. This shows how much Kanao has changed since her exchange with Tanjiro, she went from expressing little to no emotion to express her feelings without hesitation.  During the battle against Muzan, he is about to kill Kanao, but Tanjiro stops him and rescues her, carrying her to put her safely in the arms of a Kakushi so they treat her wounds.

After the battle against Muzan, Tanjiro becomes a demon. In order to turn him into a human again, Kanao uses the final form of the Flower breathing to dodge Tanjiro's attacks and being able to inject him the cure. He hits her but she survives. When Tanjiro becomes human again thanks to this, he is relieved that she is alive and they smile at each other.

Back at Butterfly state, Tanjiro meets Kanao under a blossoming tree. Kanao tells him that the tree is called "victory" and she wants to tell it that they have won. Tanjiro thinks she's very kind for doing this.

Years after the battle against Muzan, Tanjiro and Kanao would eventually marry and start a family, having two great-great-grandsons by the names of Kanata Kamado and Sumihiko Kamado between them.

“It's the heart that drives people.”
— Tanjiro convincing Kanao to live by herself.

This ship is quite popular on the fandom since it has been hinted by the author as a potential canon in the future. Although on AO3 this pair loses against other ships like InoTan or ZenTan, there are many fanarts of Tanjiro and Kanao and it is fully supported by almost all the fans even if it's not their favorite ship, and a lot of people are satisfied with their positive interactions.

On fanon, they are usually portrayed on a similar way to canon, usually with Kanao being the lovesick and flustered one and Tanjiro the oblivious one. 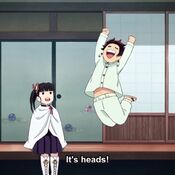 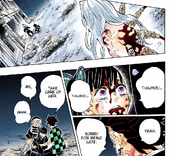 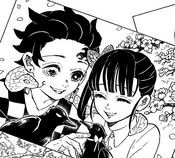 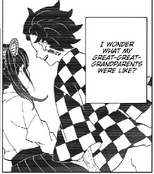 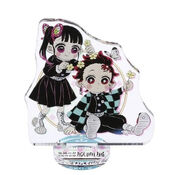 TanKanaIno refers to the ship between the two and Inosuke Hashibira