TanaKiyo is the het ship between Ryūnosuke Tanaka and Kiyoko Shimizu from the Haikyu!! fandom.

At the beginning of the main story, Tanaka is a second-year in Karasuno, while Kiyoko and is a third-year at the same school. The two first meet when Tanaka joins the volleyball club as a first-year (Kiyoko already works as a manager). Kiyoko flits into the gym, and when Ryūnosuke sees her for the first time, he falls in love. The first thing he does — he makes a marriage proposal, but Kiyoko rejects him. Apparently, he makes multiple attempts at asking her out, but she dodges them all. Despite multiple rejections, Tanaka still seems to harbour affection for Shimizu.

Tanaka's classmates note that his feeling are very obvious, and mockingly call their first meeting a "proposal at first sight incident". They discuss whether Tanaka's attitude towards Shimizu annoys or bothers her, and come to conclusion, that she never asked him to stop, so it must be fine. During the game against Inarizaki after Karasuno wins the first set, Takeda admits to Kiyoko, that at some point he started to worry Tanaka might not get through. Kiyoko says that you can always trust Tanaka to come out as a winner, because he's always at the top of his game.

In one episode, Kiyoko says that Tanaka looks good with a banana, probably referring to his behaviour making him resemble a monkey in the jungle. Although having a liking to her, when Kiyoko touched Sugawara's hands to calm him down, he isn't present in the fight between Daichi and Asahi on holding his hand, because of obvious jealousy, neither did Nishinoya. There is one scene in the manga where Kiyoko and Tanaka walk together, but without holding hands. Tanaka seems to always pick a fight with a guy who attempts to flirt with Kiyoko, and sometimes she stops him.

After playing their final match before Kiyoko graduates Karasuno, Tanaka offers to carry her bag for her. Despite usually declining his offers to help, this time she agrees. They walk together, and he notes that her bag is quite light, she replies saying that it's what she's always been saying, and they go on walking. Some time in the future, Ryūnosuke and Kiyoko both get married. Kiyoko works as a sports shop assistant, while Ryūnosuke is a sports instructor. The couple attends the game between the Black Jackals and the Schweiden Adlers to support their friends. Later the two are seen watching a volleyball match from their home and cheering together for their friend Kanoka Amanai.

The ship sailed almost immediately, when Tanaka claimed to have a liking for Kiyoko, although at first he was ignored by the woman herself. Its main rival ships are EnnoTana and KiyoYachi, especially the latter, as a big part of the fandom prefers it over TanaKiyo. Although, the ship is the only pairing in the story that went outright canon. Many Haikyuu!! fans started shipping the two only after it was revealed they got married, as it was uncertain whether Tanaka's feelings could ever become mutual. It is notable, that Shimizu looks quite happy with her husband, as they come together to the match in the Final Arc. 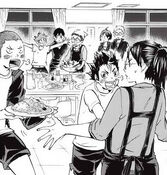 Kiyoko agreeing to Tanaka's offer to carry her bag. 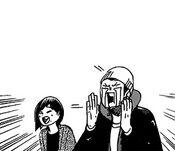 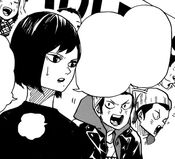 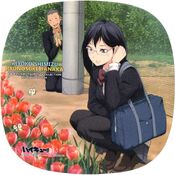