Taoling is the femslash ship between Hu Tao and Xiangling from the Genshin Impact fandom.

Hu Tao and Xiangling are both friends, considering the fact Hu Tao does help Xiangling for her cooking, they haven't yet. Not interacted in any quests yet, in game.

The two also have some similarities, the two are from Liyue and are Pyro users, they wear shorts in their designs. In game, they're also polearm users, they have similar charged attacks. Sometimes, the fanbase also calls Hu Tao as the better Xiangling. Xiangling was also in Hu Tao's Banner along with her friends, Chongyun and Xingqiu.

In Hu Tao's voiceline about Xiangling, Hu Tao tells that Xiangling is a riot, she then tells all she does to her is a little "boo". Hu Tao tells that she is easy to scare, making her love those kinds of people. Since Hu Tao is known as a pranksters, it seems as though she enjoys scaring Xiangling because of the other girl's reactions. Though, Hu Tao says that she's got to keep her pranks in check, otherwise Guoba, Xiangling's fire-spitting bear, will burn her.

In Xiangling's voiceline about Hu Tao, she sounds a little annoyed that Hu Tao is always picking and scaring her. However, she adds that Hu Tao does bring her ingredients sometimes to make up for it, being that, Hu Tao brings fermented plum blossoms for Xiangling being able to make flower cakes. It seems that Hu Tao giving Xiangling ingredients that she needs can be a sign of forgiveness for pranking her. As though Xiangling forgives Hu Tao for her antics as she brings her exotic ingredients to help with her cooking, saying that she doesn't hold a grudge.

“Is Hu Tao picking on you too? Ugh, that prankster always waits till I least expect it, creeps up on me from behind and then... Boo! then laughs herself silly. Hmph. But I can handle it, and she does bring me fermented plum blossoms once in a while so I can make flower cakes... so I don't hold a grudge.”
— Xiangling's voiceline about Hu Tao

“Xiangling's a riot! Only a little "boo" and she jumps, she's so easy to scare! Being in the industry that I am, I just love these kinds of people the most. Gotta keep it in check though, in case Guoba ends up toasting me instead.”
— Hu Tao's voiceline about Xiangling

The two are shipped together because of their similarities and dynamic. They are both pyro, polearm users from Liyue. Their relationship can be read as a friendly teasing or playful rivalry. Furthermore, many fans headcanon that they are a part of a friendgroup, along with Chongyun and Xingqiu. Since those two are also a popular ship, Taoling fits nicely with Xingyun; allowing there to be the idea of double dates.

Based on the fanbase's speculations, Hu Tao is estimated to be over 18 while Xiangling is 14 and up, making that Taoling being a bit controversial because of it. As already said, MiHoYo hasn't yet, revealed the real ages of any characters yet.

Though in other cases, Taoling's rival ships are YanTao and Xiangyan. Though sometimes Xiangling's most popular ship can be Taoling as well. On Archive of Our Own, there are currently 40 stories of the two. 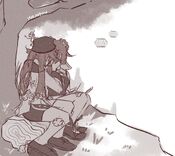 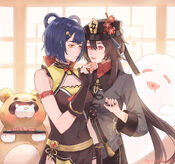 Hu Tao Banner refers to the two, Xingqiu and Chongyun.