Rose is with The Doctor's clone, Ten regenerated

TenRose is the het ship between Rose and Ten from the Doctor Who fandom.

THE PARTING OF WAYS

The Doctor starts to regenerate and tells Rose that she was amazing, and so was he. He then bursts with regeneration energy and transforms into his tenth regeneration.

The TARDIS appears back on earth, and the Doctor walks out. The Doctor greets Mickie and Jackie before passing out, Rose walks out. Mickey asks who it is and Rose tells him that it's the Doctor. They bring him inside where Rose checks on him, unsure of what to do. Jackie asks about the face change, but Rose doesn't know and it scares her.

After getting attacked by alien robots Mickey and Rose head home realizing that they're after the Doctor. At home she see's the new Christmas tree which suddenly comes to life and attacks them. Rose is able to get the Doctor awake long enough to use the sonic screwdriver to save them, before immediately passing out again.

Rose watches the Doctor passed out, feeling like the Doctor before wouldn't leave them like this. Mickey asks if she loves the Doctor, but she doesn't answer and instead turns around to hug him. The following day Harriet Jone goes on the tv to ask for the Doctor and Rose breaks down crying believing that the Doctor's never coming back.

The Doctor goes up to Rose and asks how he looks. She tells him he looks different, not good or bad, just different. He then asks the most important question: Is he ginger? Rose confirms that he isn't, which upsets him, since he'd never been ginger. He then is mad because Rose gave up on him before realizing it was rude. He then continues to question who he is now.

The Doctor battles the Sigorax and is able to save earth, and go back to celebrate Christmas. The Doctor picks himself a new outfit and walks into the apartment, and Rose smiles at him. They go outside to see that its snowing, but the Doctor corrects her saying that its the spaceship breaking up in the atmosphere. Rose asks what he's going to do now, and he tells her its back to the TARDIS. She asks if he means on his own, but that makes him ask if she doesn't want to come anymore, which she does. They'd both thought that because he'd changed that she wouldn't end up going. He holds out a hand to her. She's hesitant to take it after it got cut off, but does, and asks where they're headed first. He points to the sky and says that way.

THE END OF TIME

Rose is walking in the snow on New Years, when she hears a noise. She turns to see the Doctor. She asks if he's alright, he says yeah. She asks if he had too much to drink, but he says it was something like that. She says that he should probably head home, and he agree's with her. She wishes him a happy New Year, and he wishes her one as well. She starts to walk away, but he quickly asks her what year it is. She laughs and questions how much he had. She then tells him it's the first day of 2005. He realizes that this is the year that she's going to meet him, and tells her that he thinks she'll have a great year. She questions how he knows this but nods along, and says see ya. She then heads up to her apartment the Doctor smiling at her fondly one final time. 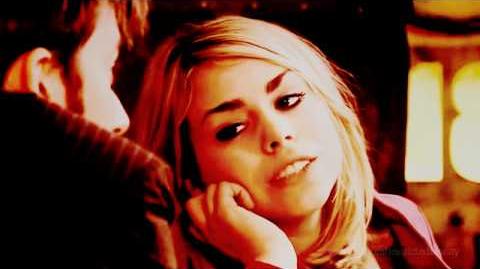