TeruKou is the ship between Minamoto Teru and Minamoto Kou from the Toilet-bound Hanako-kun fandom.

Teru and Kou are incredibly close and care about each other a lot. Kou looks up to Teru, who he sees as a role model, and oftenbrings up how he aspires to be similar to him when he's older.

Chapters 9 and 10 of the manga--the Young Exorcist arc--shed light on Teru and Kou's childhood. An eight-year-old Teru is shown to exorcise a spirit, with people whispering about his skill in the background. Kou comes running out from a behind bush after it is safe and hugs him. He exclaims how awesome his brother was, but Teru expresses concern, and reminds Kou that he had told him to stay home. Kou doesn't listen, and instead tells him how he's going to be just like him one day. Teru then pats him on the head and tells him he'll be looking forward to it.

Later into the chapter, while Nene is fantasizing about Teru, he walks up from behind and startles her. Kou notices and runs up to him, and Teru says he had actually been looking for him so they could talk. He pulls Kou aside into a dark hallway and expresses his dissapointment in him for not expelling Hanako or any of the other Seven Mysteries yet, despite being tasked with the assignment some time ago. Kou tries to convince him that Hanako isn't really an evil supernatural, and that he is truly a good person, but Teru darkly reminds him that there is "no such thing as a good supernatural." However, after Teru says he'll be taking him off the case, Kou manages to get him to agree to give him more time.

Kou spends the rest of the chapter scouting out Hanako for evil behaviour so he can prove to Teru he isn't evil and not dissapoint him. After Hanako goes out of his way to retrieve Kou's missing traffic-safety earring, Kou is convinced he has his evidence, and tells Hanako that he believes that there is such a thing as a good supernatural. Hanako, however, gets worked up, and threatens Kou with a knife, asking him why he would want to spare a murderer. Teru then appears, and saves Kou by attacking Hanako to get him off of him. Teru and Hanako go on to fight, but Kou interjects, and Teru ends up accidentally cutting Kou's hand. Teru is worried because of the injury; Kou, however, is angry, and tells his brother to stop treating him like and idiot and that he can handle himself. When Teru resists letting Hanako off, Kou insists that he will take full responsibility if Hanako ever harms anyone, and that makes Teru back off.

In Chapter 59, Semester Exams, Kou asks Teru to check his homework--study guides for his exams-- for him. Teru, after looking it over and noticing how it's completely wrong, just gently tells him to keep trying.

Later in the chapter, Teru wins a bet over who would get better scores on the exams with Akane. For his favor, he tells Akane that when Kou comes to him for help in the future, he wants him to be there for him, going on to be more specific and saying that he wants him to use all the powers that he has to assist him and protect him.

In Chapter 79, The Red House (Part 4), Teru recalls to Akane about how Kou had asked him what he would do if he became a supernatural. He was shocked when he asked, and was very offput by his question, as he wasn't sure how to answer.

Teru finds Hanako on the train to the far shore and finds him, but Kou helps him escape with Nene's assistance. Kou and Teru fight instead. When asked why he let Hanako go, Kou recalls his promise to Nene that he would always support her, no matter what. Teru tells Kou to stop acting like a hero and that Kou would have been more helpful making dinner at home. Kou expresses how it's miserable being his mom's replacement while everyone depends on Teru, who retorts by pushing Kou against a wall and telling him that it's because he is weak. However, Teru admits that he sometimes envies Kou's powerlessness. Akane interrupts the conversation to tell Teru that he shouldn't snap at his brother and that he went too far.

Just then, a portal opens up--out of which comes Shinagami-sama--behind an unknowing Kou. Teru runs after him, protecting him from danger by pushing him out of the way. Teru is impaled by Shinigami-sama, while Kou looks om in horror.

Kou tries to get Teru and Nene together, despite Kou's crush on Nene.

Kou becomes temporarily evil for a day. While in this evil state, he calls Teru an idiot, and Teru--despite his generally level-headed nature around his brother--is very hurt, and it causes him to (figuratively) turn to stone and crumble away.

“Stop treating me like an idiot!! I know I'm weak! And I'm a lot stupider than you! But it's not true that I don't have to think about anything!! I can figure out that much!! ...You're right, I know next to nothing about him. And I think...it was totally wrong of me to decide whether he was good or bad before I knew more. But exorcizing all the supernaturals just because "supernaturals are dangerous"...I just...I think there's something wrong with that... It's gonna take some time...I'm gonna get stronger, just like you, Teru-nii.”
— Kou to Teru, Chapter 9

“And, since I won...I have a favor to ask you, Aoi. My brother will likely be coming to you for help in the near future. When he does, I want you to be there for him, okay? Specifically...I want you to use all the powers you have...to assist him...and protect him.”
— Teru to Akane, Chapter 59

As this is a ship between siblings, most people in the fandom ship it platonically, and the romantic ship is generally strongly disliked. For a romantic pairing, people tend to ship Kou with Mitsuba, Hanako or Nene, and Teru with Akane or Aoi.

Teru cares deeply for Kou and is able to look past exorcising Hanako for him, despite his deep hatred of supernaturals. He has only ever accepted sparing one other, Minamoto Fairy, his little sister Tiara's pet Mokke.

The two currently have over 90 platonic works on AO3, as well as over 70 romantic works. 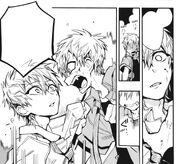 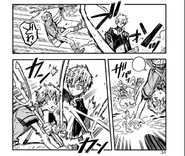 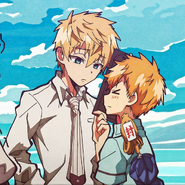