Teruhina is the slash ship between Teruteru Hanamura and Hajime Hinata from the Danganronpa fandom.

Hajime and Teruteru don't get much interaction during the game due to Terteru's early death. However, Hajime gets to interact with Teruteru during his Free-Time events. Teruteru expresses his attraction with his usual vulgar remarks, however also shows romantic attraction towards Hajime rather than just sexual attraction, which is unusual for him. Additionally, due to Teruteru's talent as the Ultimate Cook, Hajime thinks very highly of his cooking. When offered to be made a meal by Teruteru, Hajime says he looks forward to it. Hajime is overwhelmed with how wonderful his food tastes, and impressed with how it can make him feel nostalgic.

“That's fine with me! How about we start by getting to know each other? If you'd like, we can get to know each other with our bodies. Why don't you come to my cottage?”
— Teruteru after Hajime invites him to hang out.

“Hajime...you poor thing. From the bottom of my heart, I feel so bad for you.”
— Teruteru after Hajime expresses that he's never eaten food cooked with high-quality ingredients.

Hajime – “Ummm...instead of eating amazing dishes like that, I'd rather just eat normal food... But that might be because of...the current situation.”
Teruteru – “...Then...that's what I'll make for you the next time I feel like cooking for you.”
Hajime – “Huh...?”
Teruteru – “It's okay if I make an obviously cliched meat and potato stew with no fun flavors at all, right? I think it's a perfect dish for you, since you sort of look like a potato yourself.”
— Teruteru offering to make meat and potato stew for Hajime.

“I can't compete with your curiosity... But in exchange... you need to hold my hand, okay!?”
— Teruteru to Hajime when he suggests exploring the military base in Island Mode.

“Hmm... It's not like I'm scared or anything... But if anything happens, all I have to do is leap into Hajime's strong arms... Ah, if I think about it like that, I guess I can do it. Okay, let's go inside!”
— Teruteru to Hajime after he suggests going to the haunted house in Island Mode.

Hajime – “It's delicious...! It's extremely delicious!”
Teruteru – “Well, obviously it's delicious. After all, I'm the one who made it!”
Hajime – “That...that maybe be obvious, but it's not just delicious. This taste... How should I put it...? It reminds me of something I forgot...”
—Hajime eating a dish Teruteru made for him.

“What's up? Why are you looking at me with such passion...? Oh, I get it! You've finally awakened! Then let's go right ahead and start planning our future together! All through the night, of course...and in bed, obviously!”
— Teruteru at the start of his 5th Free Time Event.

Teruteru – “My cooking was just...for the sake of making the person most important to me...smile... Why did I forget something as important as this...?”
Hajime – “But...you remember, right? So all you have to do now is never forget that again. That's probably your dream or something, don't you think? Well, it's not like it's my place to say that.”
Teruteru – “Hajime... Just as I thought, you're quite interesting! It'd be great if you'd let me thoroughly inspect you just once! Of course, I'd like to thoroughly inspect you while you're naked as the day you were born!”
—Teruteru to Hajime after he remembers why he started cooking.

Teruteru – “I know! To thank you for everything, I made something to make you happy! Trying eating this!”
Hajime – “Then I won't hold back... Thank you for the meal. I-It's so good! It's just too gooooooood!”
Teruteru – “Well, obviously! I gave my all when I made it!”
—Teruteru offering Hajime a rice ball.

The ship sailed thanks to Teruteru's free-time events. As Hajime is the protagonist, direct interactions with Terteru were able to be seen, which made it easier to fuel the ship. Some also find it refreshing to see the typical "perv" character, who's usually obsessed with the opposite sex, making advances on a male protagonist (similar to the reasons people ship Terunidai).

The ship also sailed due to Hajime being very respectful of Teruteru. Although his sexual remarks can be off-putting, Hajime tries to let them not bother him and instead focuses on other parts of his character. Hajime thinks very positively of Teruteru's cooking ability and isn't grossed out by him, which is why people like the ship. As for physical features of the ship, the height difference is a big factor, with Hajime at 179cm (5'8") and Teruteru at 133cm (4'3"), creating a 46cm (18") height difference, which can be very appealing.

Despite being Teruteru's 2nd most-written ship on AO3, it only has 16 fics, and is beaten out only by Terunidai, which has 18. Additionally, the fact that Teruteru is one of the fandom's most hated characters with Hajime being one that is generally well-received doesn't help the ship's popularity. Because of this, it's no surprise that the ship doesn't get nearly as much content as popular Hajime ships such as Komahina, Hinanami, Komahinanami, or Hinamiki. As a result of being very uncommon, the ship is considered a rarepair and doesn't have many supporters in the fandom. 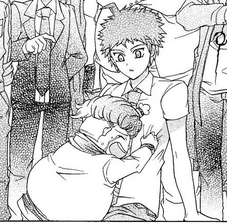