TetsuKendo is the het ship between Tetsutetsu Tetsutetsu and Itsuka Kendo from the My Hero Academia.

Tetsutetsu and Itsuka are classmates and very friendly to each other, helping and protecting each other in dangerous situations. The first appearance of both is in the second season after the cavalry battle at the Sports Festival and, although the only interaction has indirectly shown was Itsuka giving up her spot to be in the tournament over to Tetsutetsu's team because "They fought until the end", she it was capable wasting a great opportunity to show off his skills to Professional Heroes because she thought that Tetsutetsu and his team deserved the opportunity more. Tetsutetsu seems to appreciate this gesture, as he cries with joy, and Itsuka cheers him on during the tournament.

Although Itsuka and Tetsutetsu pop up throughout the show in Season 2, they aren't seen interacting again till Season 3, where they show their good teamwork and camaraderie. The next night of the forest camp, while Class 1-B scared off the Class 1-A students in the Test of Courage exercise, the Vanguard Action Squad attacks the camp in an attempt to kidnap Katsuki Bakugou. Mustard's poison gas surrounds most of the forest there and effectively knocks out some of his classmates. Itsuka protected Yui Kodai and Juzo Honenuki from the gas with her hands when they found Tetsutetsu carrying an unconscious Ibara Shiozaki. Tetsutetsu hands Itsuka and Yui gas masks made by Momo Yaoyorozu and tells them that Momo and Yosetsu Awase take their companions to safety. Itsuka wishes to join them, but Tetsutetsu refuses to flee. He explains that even though Itsuka always defends Class 1-A from Neito Monoma, there is no denying the difference between the two classes. Class 1-A has grown because they've fought through crises, and Tetsutetsu wants that same opportunity.

In the end, Itsuka decides to go with Tetsutetsu to find the culprit of the gas while entrusting the safety of Ibara and Juzo to Yui. When they have gone slightly further into the gas, Itsuka stops Tetsutetsu to warn him about the gas. Tetsutetsu tells her that he understands it's dangerous and that she should give him credit. Itsuka undeterred points out that it gets thicker towards the center of the forest and that the person who has the poison gas quirk must be in that area. She also warns him that they can go further thanks to the masks, but they can only filter so much and that it could be risky. Tetsutetsu takes this into consideration and says that he is angry at the villains' actions because they hurt his classmates. Before running in search of the Gas Villain, he ends up saying, "So all we need to punch the guy responsible for this!". Itsuka follows him, and while reflecting on Tetsutetsu's direct attitude, he smiles happily, admitting that he likes that part of him.

Once they reach the center, he is finally met by the gas user, Mustard, and Tetsutetsu rushes to attack him just to get shot by the Villain. Thankfully his steel quirk protects him from further damage, but his gas mask comes off in the process. His steel is weakened by having to hold his breath to keep from inhaling the poison gas. This continues with Mustard shooting Tetsutetsu as his steel weakens. When the Villain points his weapon at Itsuka, Tetsutetsu jumps in front of the bullet to protect it, but his steel is so weak that the shot causes bleeding, much to Itsuka's concern. Itsuka eventually steps in with her enlarged hands and starts waving them around to move the gas around so that Mustard can't predict her movements. She lectures Mustard on his beliefs while Tetsutetsu takes this chance and punches Mustard, effectively knocking him out. After defeating the Villain, Itsuka is seen holding Tetsutetsu and Mustard with her hands.

Once again, Tetsutetsu and Itsuka keep showing up, but they are not shown interacting until Season 4 during the school festival by U.A. Before her Class's play for the festival, Tetsutetsu, along with Yosetsu and Neito, visits Itsuka, who is preparing for the Beauty Pageant that she is forced to participate in, where Tetsutetsu says that Itsuka looks good in her dress that she is wearing for the beauty pageant. By the time the contest begins, Tetsutetsu is seen gleefully looking at Itsuka alongside Eijiro Kirishima. After the contest, Tetsutetsu is seen hitting Neito, apparently for an unfortunate comment about Itsuka's defeat.

When the Itsuka team's match against Momo's team begins during the joint training arc in Season 5, Hanta Sero asks Tetsutetsu what Itsuka's role in Class 1-B is; Tetsutetsu responds by shouting that if it weren't for her, the Class 1-B would fall under the influence of Neito and calls her the older sister of Class B. Tetsutetsu is constantly shown cheering for Itsuka amongst the students and when he wins he smiles and ends up saying "That's our Kendo!"

Since these characters are background characters, they aren't too popular, so their ships wouldn't be either, but this ship has become mildly popular in the fandom since people love their dynamic and think of it as a cute ship. Most of the fandom sees this as Tetsutetsu has a crush on Itsuka but doesn't believe someone as smart and pretty as her would ever like him. Or the other way around, Itsuka believes Tetsutetsu isn't interested in her when he is really in love with her.

This ship gained considerable attention during Season 2 and even more in Season 3 because they showed to be a good team and protected each other. Following Itsuka's friendly match against Momo in joint training, the ship gained even more fans thanks to Tetsutetsu constantly praising Itsuka during the match. Thanks to the fact that he was also sitting next to Shoto Todoroki when he did so (who was cheering on Momo), TetsuKendo became popularly paired together with TodoMomo.

Tetsutetsu protecting Kendo from a bullet 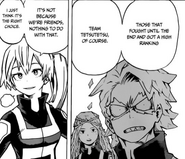 Tetsutetsu calling Itsuka the older sister of Class 1-B 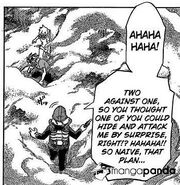 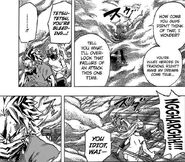 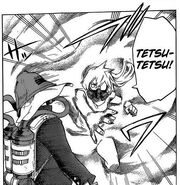 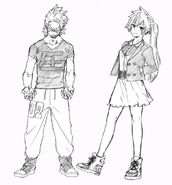 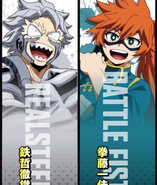 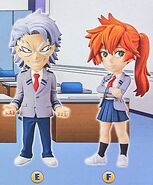 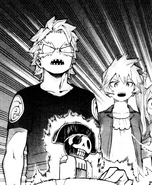 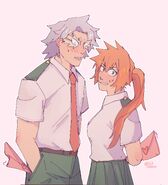 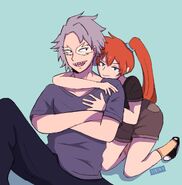 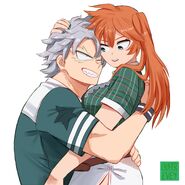 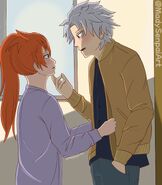 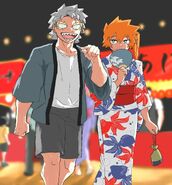 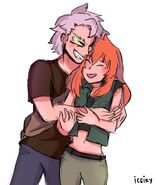 Kendo and Tetsutetsu vs Mustard - My Hero Academia