Companions; Yaz is now on Earth and the Doctor is in prison

Thasmin is the femslash ship between the Thirteenth Doctor and Yasmin Khan from the Doctor Who fandom.

Arachnids in the U.K.

The Doctor is able to get Graham, Ryan and Yaz back home. Yaz notices that she doesn't have any messages on her phone, the Doctor explaining that they've only been gone for half an hour. The three asks what the Doctor is going to do now. She sadly says that she's back to traveling the universe...alone. Yaz takes note of how sad she sounds and asks if the Doctor wants to come inside for tea. The Doctor excitedly says yes, and quickly follows Yaz inside.

Yaz leads the Doctor and Ryan into her family's flat and introduces them to her sister and dad. The Doctor strolls around the flat, noticing Yaz's dad's trash collection, and he explains, much to Yaz's embarrassment, about his theory. Yaz has to leave to pick up her mom, but says that she'll be back.

The Doctor and Ryan, along with a Dr. Jade McIntyre discover giant spiders, and the trail leads back to the hotel that Yaz's mom, Najia, works at. They get to the hotel where they meet Yaz and Najia in the lobby. The Doctor greets Najia with a hug, and tells her that she made an awesome human. They hear gunshots and race towards the sound.

The Doctor takes Yaz into a room where a man was just taken by a spider. When she see's it she pulls herself and Yaz out of the room. The group, along with the hotels owener Robertson, all run to the kitchen. The Doctor needs to come up with a plan and needs a blue print. Najia asks Yaz who the Docotor is, but Yaz says they really need to figure out a plan. Najia asks if they're dating. The Doctor becomes confused. She doesn't think they're dating, but asks Yaz to clarify. Yaz says that they're just friends, that the Doctor saved her life several times over. Their then able to get to the basement of the hotel and finds the spiders nest.

They're able to come up with a plan to defeat the spiders, but as the mother spider is suffering Robertson shoots it. The Doctor becomes angry, and the group leaves the hotel on a very sour note.

The Doctor is getting ready to leave, when Ryan, Graham and Yaz seem to come and say goodbye. They reveal that they want to join her. Ryan and Graham need time to mourn Grace. Yaz tell the Doctor that she wants more of the universe, more of her...and her family is driving her nuts right now, so she needs a break. The Doctor smiles, and all four of them set out for the rest of the universe.

In this canon short story in the Star Tales anthology, the Doctor takes care of Yaz while she's on her period, giving her a hot water bottle, a bar of chocolate, and letting her relax in a fancy bathroom in the TARDIS, telling Yaz the story of when she (as the Eleventh Doctor) met Amelia Earhart.

“If something happens to Umbreen, your whole timeline could be erased. No Yaz! We can't have a universe with no Yaz!”
— The Doctor to Yaz[[[3]|[src]]]

Fans began to ship the two right away, but it took off more after Arachnids in the UK. Yaz's reason for wanting to go traveling with the Doctor seemed like admitting she had a crush on her. Yaz's mother also asked if they were dating, which added fuel to shippers and fans with Bi!Yaz headcanons. Many fans early on were upset with Yaz for suggesting that the Doctor needed to change out of Twelve's old clothes, given how attractive she looked in them.

Thasmin tag on Tumblr
consider this 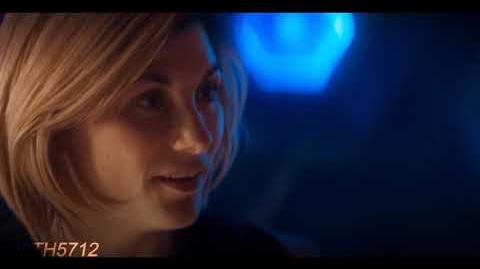 Retrieved from "https://shipping.fandom.com/wiki/Thasmin?oldid=203745"
Community content is available under CC-BY-SA unless otherwise noted.