The Big Three is the poly ship between Mirio Togata, Tamaki Amajiki and Nejire Hadou from the My Hero Academia fandom.

Mirio, Tamaki, and Nejire are part of the "The Big Three" (ビッグ3 Biggu Surī in Japanese) as they're third year students in U.A. High School. They're the top ranking students of their whole school are are also well represent top hero candidates in Japan. Their introduction was made by Aizawa to the Class 1-A officially.

The trio are well known to possess very powerful quirks as they worked hard in order to be the best students at their hero school. Despite being known to be powerful their odd personalities leave a strong impression on people, an example could be Tamaki's shyness that doesn't allow him to talk at people correctly, even though both Mirio and Nejire can be very friendly. The Big Three are also known to be the strongest hero students of all of Japan, due to their hard work and powerful quirks they're considered to be much more powerful than Pro Heroes as well once they graduate they're be ready to be top pros. Similar to how All Might, Endeavor and Hawks are the long high ranking pro heroes of Japan, Mirio, Tamaki, and Nejire are expected to raise up to their ranks.

The three are also close friends, as Mirio and Tamaki have known each other since they were kids and later met Nejire when they attended UA. After Tamaki and Nejire learned about the little girl that Mirio didn't save when he should have, they felt sorry for him and know how much he wants to make up for it. Even though each one of them were able to do their parts in saving Eri and making sure that the Shie Hassaikai can never harm anyone again, Mirio ends up losing his quirk when he got hit by a quirk erasing bullet. Tamaki had also been hit by one, but he was luckier than Mirio as his quirk was able to return, while Mirio will remain quirkless. As his friends, Tamaki and Nejire support him through that hard time and have faith that Eri will one day be able to restore Mirio's quirk. Until then they help Mirio to look after Eri, since she has nowhere else to go and after when she went through with Overhaul, the three believe that Eri desires a chance to be cared for by people who see Eri as a the kind little girl she is.

People tend to ship The Big Three all together, but in cases there are people who prefer shipping MiriTama and leaving Nejire with other person, specifically Yuyu. Those who can't pick between NejiMiri, MiriTama, and NejiTama, which these are in rare cases, they ship all the three together making it a love triangle between the three of them. There have also been those who prefer to keep the three as friends. Some MiriEri fans like to add in Tamaki and Nejire, as they help Mirio to care for Eri like they are her big brothers and sister figures.

"The Big Three" name is also used in TodoBakuDeku, as "The Future Big Three" because of the similar potential that it has just like the original big three. On AO3, the ship currently has 140+ gen works and 136+ poly works. 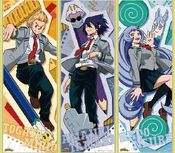 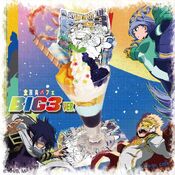 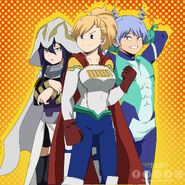 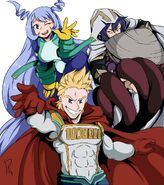 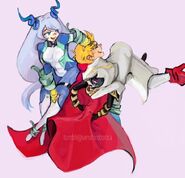 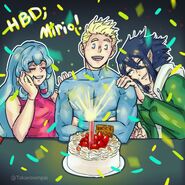 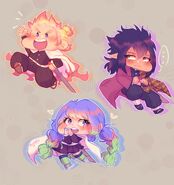 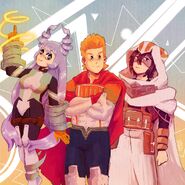