The Four Muffinteers is the friendship between Dream, GeorgeNotFound, Sapnap and BadBoyHalo from the Dream SMP fandom.

The Four Muffinteers met each other in a variety of different ways. Dream met Sapnap and BadBoyHalo on McPvP in early 2013 and late 2013 respectively.[1][2] Dream met George when George became a developer at MunchyMC, BadBoyHalo's Minecraft server, in 2015-2016.[3] This is also how George met BadBoyHalo as BadBoyHalo is the owner of MunchyMC. Sapnap also met George through MunchyMC.[4]

For Minecraft Championship All Stars, the four were on the Red Rabbits team together. The event's teams were more focused on fun combos rather than balance.[5] The group won the event. They were even the best performing team for various games including Parkour Tag, Sky Battle, Ace Race, Sands of Time and To Get To The Other Side And Whack A Fan. Besides the All Stars event, the four have not all been in the same Minecraft Championship team.

The group was included in the original eight Dream SMP members, with Dream being the creator and the rest being his close friends. BadBoyHalo isn't involved with a lot of story-related things with the other three, though it is known that he is the father of Sapnap in the story.

Despite most people liking The Four Muffinteers as a friendship, there are some that like it as a poly ship. This is because of the popularity of ships like Dreamnap, DreamNotFound and SapNotFound. Though, there are some reasons why others prefer to keep BadBoyHalo out of the poly ship and ship Dream, George and Sapnap alone. One reason is because of the rival ship Skephalo. Another reason is because of how Sapnap has stated he's uncomfortable with being shipped with BadBoyHalo[6] and BadBoyHalo is Sapnap's dad in the Dream SMP roleplay. Even with all these reasons, the ship between the four currently has 60+ romantic works on AO3. The ship also has 354+ gen works on AO3. 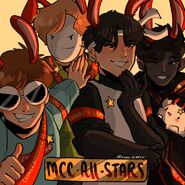