ThomaLuc is the slash ship between Thoma and Diluc Ragnvindr from the Genshin Impact fandom.

Thoma and Diluc don’t have any canon interactions in the game due to living in different nations. Diluc lives in Mondstadt while Thoma currently resides in Inazuma. In Thoma’s Hangout Event and character study, however, it was confirmed that he was raised in Mondstadt when he was younger so it’s possible that these two met when they were little.

The two have several similarities with each other. Both have a complex aesthetic together with their main red color scheme. Both are also known to be pyro characters in the game. Diluc uses a claymore as his main weapon while Thoma uses a polearm in gameplay. Both characters are also quite popular in their respective nations. Diluc is famous for being the son of Crepus and the former cavalry captain of the Knights of Favonius. Thoma is Kamisato Ayaka’s servant and close friend which makes him popular in Inazuma. He also sometimes help people in the city which made most people see him as a friendly guy.

When it comes to their personalities, Diluc and Thoma are not alike. Diluc is often considered a reserved and anti-social person which can be seen in his interactions with the other characters in the game. He can also be sometimes stubborn and isn’t really fond of the Knights of Favonius after the death of his father. Thoma on the other hand is well-known in Inzauma for being a friendly and outgoing young gentleman. He can be seen trying to help other characters and the Traveler during the Archon Quest and his Hangout Event.

ThomaLuc isn’t really a popular ship within the fandom and most fans consider them a rare-pair. Fans are hoping for them to interact in the game if Thoma wants to have a little vacation in Mondstadt. Thoma’s sweet and patient personality could also help Diluc open up, eventually move on from his father's death, and improve his relationship with Kaeya. This ship gained popularity because of the famous trope “Opposite Attract” and because of their similar appearances.

There are also few theories about this ship. One being that Thoma and Diluc were childhood friends (when Thoma was still in Mondstadt) along with Jean and Kaeya. Another theory is that after the death of his father, Diluc started to stop spending time with Thoma and decided to focus on his wine industry as a way to move forward from his death. This theory might be true because of Thoma’s familiarity with Jean and Eula in his voicelines and it’s possible that he also had memories with them before. Another theory is that Thoma moved to Inazuma before the death of Diluc's father, so Thoma's memory of Diluc is much different from how Diluc is now.

The ship currently has 100+ fanfics and 4 works on the gen side on AO3. It mostly gets overshadowed by KaeLuc, JeanLuc, Thomaya, Thomato, and ThomaLumi, their most popular ships. 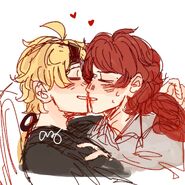 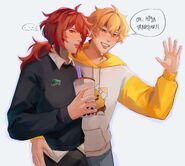 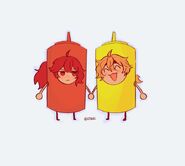 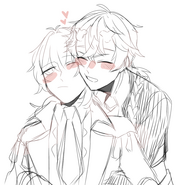 ThomaToLuc refers to the ship between the two and Kamisato Ayato