Thomaya is the het ship between Thoma and Kamisato Ayaka from the Genshin Impact fandom.

Thoma is a loyal servant of Ayaka and her closest friend. According to Ayaka’s first character story, she went against the will of others and accepted Thoma into the Kamisato clan back when he was a commoner. Thoma has been devoted to Ayaka ever since and she trusts him completely.

Thoma was shown in Ayaka’s character demo. He watches her practice her swordplay, and claps while telling her that her form is flawless as ever. He suggests that she try a softer touch so no one gets hurt. Ayaka asks him to spar with her more so she can improve, to which he agrees.

In Thoma's character details, it's stated that one of the special matters he deals with is fulfilling Ayaka's wishes.

Thoma thinks very highly of Ayaka, and uses the respectful term of "milady" to refer to her. He wishes that she would open up more, and state her opinions more often.

Ayaka calls Thoma a dear friend and says that he is always able to cheer her up. She has fully accepted him as a member of the Kamisato family despite their differences in status, even going as far as to consider him as another brother of hers.

Thoma praises Ayaka, saying that she's all in respect, a well rounded person. Erudite, compassionate, well-mannered, and elegant. However, the only that she could do better is to speak her mind more, presumably meaning her social skills. In fact, Thoma tells the Traveler an advice if in any case, they might be in this situation with her.

Thoma takes the traveler to meet Ayaka, who is unable to speak to them face-to-face due to her being nobility. Later, she appears in front of them and states that she is able to speak directly with people she considers friends, and that Thoma is one of those people.

When Thoma is captured by the Raiden Shogun, Ayaka is devastated. She immediately plans to go save him with no regard for her own safety. The traveler calms her down and goes to rescue Thoma in her stead.

After the Vision Hunt Decree is abolished, Ayaka is seen greeting Thoma outside of Komore Teahouse.

“Thoma is a dear friend. He always lifts my spirits with his sunny disposition. In a sense, I think of him as another brother, and as a full member of the Kamisato Clan.”
— Ayaka’s voiceline about Thoma

“Milady is in all respects a well-rounded person: erudite, compassionate, well-mannered, and elegant... The one thing she could do better is to speak her mind more. In fact, watch out for this the next time you're talking to her — sometimes, she looks like she's about to say something, but then she holds back. If that happens, keep asking her opinion, see if you can encourage her to open up a little.”
— Thoma’s voiceline about Ayaka

“[Ayaka] even went against the opinions of others and took in that commoner, Thoma.”
— Ayaka’s first character story

"Thoma does not stay in the Yashiro Commission, but goes elsewhere to deal with some special matters discreetly. For example: solving the problems encountered by the Yashiro commission, asking for information for the head of the Kamisato Clan, fulfilling Ayaka's wishes, etc.

Thomaya has been the most popular ship for both characters ever since the closed beta. Ayaka had voicelines about a character named Thoma who seemed to be close with her. Once his model was leaked, shippers began drawing fanart of them. Since Thoma’s personality was originally unknown, his portrayal in early fanart varies greatly. At one point, a fake leak circulated that Thoma and Ayaka were engaged, which further fueled the ship.

The ship’s popularity grew again after Ayaka was released and shown interacting with Thoma in the game. Thoma’s dedication to serving Ayaka had many fans suspecting that he may be in love with her. Ayaka’s statement that she thinks of Thoma as family was a little disappointing to shippers, but it’s possible her feelings could change or that she hasn't realized them yet. As an alternative, some people have started shipping Thoma with Ayaka's brother, Kamisato Ayato.

When Thoma and Ayaka were first introduced, Thomaya rivaled AyaLumi and Ayather. As time went on, new ships arose and new rivals for Thomaya appeared. The biggest rivals that appeared were Ayamiya and ThomaTo. 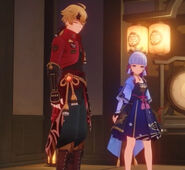 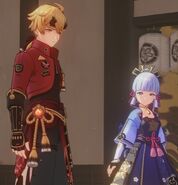 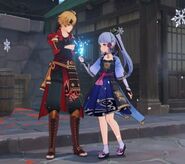 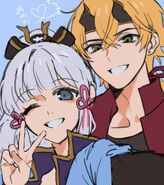 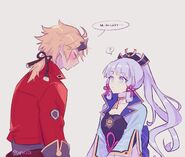 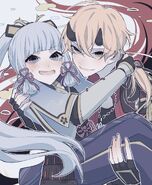 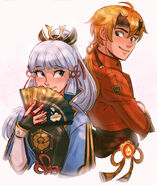 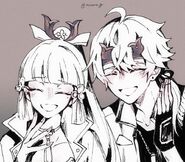 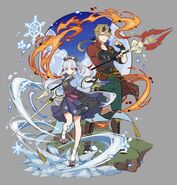 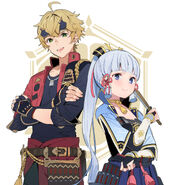 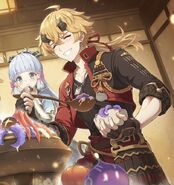