• Bash Brothers
• Battle Couple - Fellow Avengers.
• Beast and Beauty - Thor is really attractive, and Hulk is often referred to as a beast or monster.
• Birds of a Feather - Hulk and Thor are both a couple of hotheads.
• Did You Just Romance Cthulu?
• Divine Date - Thor god of Thunder.
• Friendly Rivalry
• Hair Contrast Duo
• Interspecies Romance - Bruce is a human, while Thor is an Asgardian.
• Mayfly-December Romance - Asgardians live thousands of years longer than humans.
• Not So Different
• Office Romance - "He's a friend from work!"
• One Head Taller - Thor is 6'3'', while Bruce is 5' 8''. Hulk is two feet taller than Thor though.
• Understanding Boyfriend
MOMENTS
• Big Bad Friend - Happens twice. First when Hulk gets unleashed on the Helicarrier. Then again when Thor fights Hulk on Sakaar.
• Fighting Your Friend
• Go Through Me - When Thor stands between Bruce and an alien about to attack him.
• "I Know You're in There Somewhere" Fight - Thor tries to get Bruce out of Hulk on Sakaar.
• Outlaw Couple - On Sakaar.

ThorBruce is the slash ship between Thor Odinson and Bruce Banner from the Marvel Cinematic Universe fandom.

Just as Hulk is about to attack Natasha, Thor arrives and crashes him through a wall. The two start to fight, and Thor tries to remind Bruce that they're not enemies, but Hulk knocks him across the room. Thor then summons Mjolnir and knocks Hulk across the room. Hulk is about to attack again, but Thor throws Mjolnir to stop Hulk momentarily. They then continue their fight, with Hulk about to win, when a jet plane fires on Hulk and diverts his attention.

The two fought alongside each other in the fight to retrieve Loki's scepter and the Battle of Sokovia. After the battle, the Hulk stole a Quinjet and flew away from Sokovia, eventually flying through a wormhole and crash-landing on Sakaar, where he became the reigning champion of the Grandmaster's Contest of Champions.

As Thor enters the Champion's arena, green smoke appears and people start to cheer. The Grandmaster then announces the champion who rushes into the arena and turns out to be Hulk. Thor yells in joy and yells to the Grandmaster that he knows Hulk from work. Thor then asks where Hulk has been, and that everyone thought he was dead. He starts telling him all that's happened, and that he never thought he'd say it, but he was very happy to see Banner. Thor calls to Banner again, but Hulk says that there's no Banner, just Hulk. Thor asks what he's doing as Hulk attacks. They continue to fight, as Thor tries to says that he doesn't want to hurt Hulk since they're friends. They continue to fight until Thor is able to knock Hulk against the wall and incapacitate him for a few moments. Thor then slowly walks over to him, and starts doing the "Sun's getting real low" mantra. They touch hands and Thor smiles, when Hulk grabs him and starts smashing him into the ground. Thor gets up and decides to go for the real fight. He still tries to get through to Bruce, and swears to get him out. Hulk is about to beat Thor, when Thor is suddenly able to control his lightning and blasts Hulk. They continue their fight and it seems that Thor is going to win, before the Grandmaster knocks Thor out and Hulk wins.

As Thor jumps out the window, Hulk calls for him to stay. Once Thor gets the quinjet working, Hulk tears off the back, calling for Thor to stay. Thor tells him to stop when he suddenly unlocks a message from Natasha. Hulk starts to freak out and turns back into Bruce. Thor comes over to him, and Bruce freaks out. Thor helps him calm down, and Bruce asks what happened to his hair. Thor explains that a creepy old man cut it off, and Bruce says that it looks really good. Bruce asks where they are, what happened to Nat and Sakovia. Thor breaks it to him that he's been stuck as Hulk for two years. Bruce wants to know what happened and finds the ships log. They see a video of Hulk ending up in space, and Bruce asks where they are. They're interupted by the Grandmaster's announcement, and Bruce asks who that is. Thor explains that he runs the place, that Bruce lived at his house, and that the two of them had a fight recently. Bruce asks if he won, and Thor lies saying that he did. Bruce doesn't think that sounds right, but Thor insists that it was true. Thor says that they need to go, and Bruce starts to freak out. Thor then tries to keep him calm as they get ready to move.

As they travel through the streets, Thor repeatedly does the "suns going down mantra", but Bruce tells him to stop. Thor says that it's just because he needs him calm, but Bruce doesn't know how to do that when he's stuck on an alien planet. Thor point out that he's been on a planet before, but Bruce says that it's only been one, earth. Thor says that it's a new experience. Bruce feels completely off since Hulk had control for two years, but Thor says that he's back and that's all the matters. Bruce says that he doesn't know if he can come back if he ever becomes Hulk again and that they're stuck in the most stressful environment possible. Thor says he's going to find a way to get them home, and Bruce thanks him. Thor admits that they have to get to Asgard first, to fight Hela his sister. Bruce says he doesn't want to fight anymore powerful beings, and that Thor doesn't care if he never comes back from being Hulk. Thor says he needs Hulk and Bruce accuses him of just using him to get to Hulk. Thor says that he doesn't even like the Hulk and prefers Bruce. Bruce thanks him, but Thor then admits that the Hulk is more powerful and useful. Bruce says that he is just as much, and Thor finally says Bruce doesn't need to fight anyone. But they do need to move. Bruce asks what Thor is doing with the cloth, and Thor says he needs a disguise. Bruce suggests that he disguise himself as Tony, but Thor says that Bruce is his own disguise. Bruce asks why Thor put him in Tony's clothes then, and Thor points out that it was because he was naked. He asks why he's being so weird, and Bruce says that maybe it was being trapped for two years. He starts to Hulk out a little and Thor starts to try and calm him down.

He takes Bruce out into the street, and tells Bruce that once they're in Asgard, he won't ever have to think about Hulk ever again. Bruce is happy with that, until he gets sprayed in the face with green dust. A parade of people trying to search for Hulk comes by, and Thor looses Bruce in the crowd. He calls out to search for him, he finds him just as one of the aliens is about to attack Bruce. Thor stands in front of him to protect him, just as Valkyrie shows up and takes them back to the her place.

Once there, Thor points out the Devil's Anus as the wormhole that they're going to go through. Bruce says that it looks dangerous, and Valkyrie says that they need a ship. Thor says that they'll need one that can withstand the strain, and Bruce adds that it would need to function with just them at the wheel. Thor says that it's going to be quite an adventure and he and Bruce share a high-five/fist bump. When Loki offers help, Bruce pulls Valkyrie and Thor to the side, and tells them that Loki is ready to kill them if necessary. Valkyrie says the same, and Thor tells them that he's tried to kill him a lot. Thor says that they're going to start a revolution to draw the guards away, and Bruce asks what he means. Thor says he'll explain later. Valkyrie asks who Bruce is and he tells her he'll explain later.

Valkrie launches Bruce onto the ship that Thor stole, just as their getting caught by the Sakarian forces. Bruce asks if they should be shooting back, and Thor agrees that they should but can't find the guns. Valkryie informs them that it's a leisure ship that the Grandmaster uses for orgies. Bruce asks if she really just said that, and Thor tells him not to touch anything. When Valkyrie starts destroying the ships one by one, Thor decides to help her. He tells Bruce to drive, but Bruce doesn't know how to fly a ship. Thor says to use one of his PHD's, but Bruce just yells that none of them are for flying a space ship.

As Thor tells Valkyrie that Surter needs to destroy Asgard, Hulk wakes up and goes to fight him. Surter brushes Hulk aside, and Thor yells at Hulk to stop trying to fight him. To not smash for one in his life. Hulk points out that it's a big monster, but Valkyrie tells him it's time to go. Hulk says fine, and grabs the two of them before jumping onto the ship.

Thor and the Hulk desperately fought against Thanos when he attacked the Statesman, but ultimately lost. Heimdall used the last of his strength to summon the Bifrost and transport the unconscious Hulk to Earth.

Thor and Bruce were reunited in Wakanda. When Thor made his entrance with the Bifrost along with Rocket Raccoon and Groot, Bruce opened the helmet of his Hulkbuster armor to laugh and yell to the Outriders that they were screwed now. They both later survived Thanos' snap to kill half the universe.

Bruce goes to new Asgard to retrieve Thor. While there Bruce says that when he was in a rough patch, it was Thor who helped him.

Later when Bruce is handling a newly made gauntlet, he seems to get hurt, Thor then desperately yelling at him to take it off, highly worried for his safety.

“We know each other! He's a friend from work!”
— Thor, Thor: Ragnarok.

“Hey, big guy. The sun's getting real low. That's it. The sun's going down. I won't hurt you anymore. No one will.”
— Thor attempting Natasha's lullaby, Thor: Ragnarok.

“What's the matter with you? You're embarrassing me! I told them we were friends!”
— Thor to Hulk

Bruce – “The whole thing is totally different this time. I mean, in the past, I always felt like Hulk and I each had a hand on the wheel. But this time it's like he had the keys of the car and I was locked in the trunk. ”
Thor – “Well, you're back now, that's all that matters.”
— Thor: Ragnarok

Shipping between the two started in the comics as well as in the first Avengers film, but was a more of a rare pair. The ship's popularity skyrocketed after Thor: Ragnarok, when they were shown interacting more. Deleted scenes from the film show Thor and Bruce touching each other often.

Fans love ThorBruce mostly because they helped each other out of their 'rough spots', and they consider it sweet that two of the strongest Avengers are actually having one of the most caring and unproblematic friendships. Some also note Thor's respect toward Bruce because although he needed The Hulk, he didn't force Bruce to turn into The Hulk without his consent, he attempted to reason with him first. 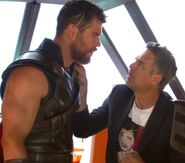