Throy is the het ship between Thea and Roy from the Arrow fandom.

Thea and Roy literally have a meet cute when Roy steals Thea's purse and she manages to track him down and have him arrested. After he tells the police it's for his mother's medicine, Thea tells Laurel to let him walk, but Thea seeks Roy out at his home later on to get her purse back, where he tells her he faked the story. Although Roy is a thief, Thea's smitten after he saves her from some thugs and gets stabbed. At the hospital, the doctor assumes they're together as they bicker. Roy has to get a shot, but is scared of needles for which Thea teases him and then kisses him to distract him from the pain.

They sorta start dating and Thea tries to get Roy a job at Verdant, which he bails on much to her dismay, not convinced that he can live a 'normal' life. Everything changes for them when Roy is abducted by a man seeking to avenge his wife's death by murdering people on live streaming. Thea is terrified for his life and Oliver saves Roy's life.[2] Roy awakens to a whole new existence where he feels like his life can matter and he goes on a quest to find "The Hood" to that end. Thea helps Roy who, unbeknownst to her, steals a police radio and Det. Lance decides to put his "frequent guests" off their hunt by taking them to the morgue.[1] It doesn't take, but after they meet Oliver, who strongly dissuades them from their pursuit, Thea walks out on a continually hellbent Roy after he disparages Oliver.[3]

Upon Moira Queen's confession that The Glades are being levelled, a horrified Thea runs off to find Roy there and saves him from a thug who's about to shoot him. They try to leave The Glades, but are stopped by a man asking for help to save a bus full of people. Thea is adamant that Roy doesn't have to prove anything, but he assures her he just wants to help because it's right. Thea leaves for safety and Roy stays.[4]

5 months after Tommy's death and the levelling of the Glades, Roy and Thea are still together but are fighting over Roy acting as a vigilante in lieu of "The Hood". Thea disapproves as she worries for his safety and so Roy tries to hide it from her, unsuccessfully. He tries to convince Thea that it is worth it as he's helping the city the way the vigilante did. Roy also tries to convince Thea to visit her mother in prison, saying that however much she wants to hurt Moira, she's also hurting herself.[5] After crashing a stolen car to stop Chien Na Weh, Thea gives Roy an ultimatum as she knows she can't change his mind — stop being a vigilante or get fired and lose her. After Arrow asks Roy to be his intel on the city's troubles, Roy cedes to Thea's ultimatum.

In tracking down the blonde vigilante for The Arrow, Roy meets Sin. They later talk at the Cash For Guns initiative where Thea and Sin meet. Sin is shot in the crossfire when "The Mayor" shows up and Roy saves her life. Thea is so impressed with and proud of Roy and they both stay with Sin in the hospital, who concedes she likes 'rich girl' Thea's fearless and grounded attitude.[6] After Roy's arrested trying to be a hero, Moira's lawyer tells Thea that she should break up with him because it could hurt her mother's case. Moira calls Roy from prison and asks to meet him, getting the two back together and saying that is what's most important to her.[7]

As Moira's trial begins, Roy sits with Thea and Oliver in court and supports Thea throughout the trial. When Sin needs help finding her missing friend, Roy is surprised that Thea wants to come along and isn't disapproving of this activity.[8] Next thing she knows Roy's been shot in the knee by The Arrow and, in spite of her brother's warning to stay away, Thea is determined that she, Sin and Roy will find Max. They enlist Laurel's legal help and find out that a psych evaluation file may get them closer to finding the truth. Roy gets abducted trying to get the file and Thea is worried sick, but finds him in her bed after Oliver saved him from the Mirakuru cult.[9]

5 weeks after he was injected with Mirakuru Roy begins to feel the effects and Thea notices, but he won't let her in on what's going on. Roy tries to assure Thea he's fine, and while making out Roy gets a deep cut, heightening Thea's suspicion when it barely scratches him. Thea can tell he's suffering and tries to get him to talk so she can help, but Roy is too scared that she'll be endangered. They attend the Unity Rally together, along with Moira, and when a power mast falls where they stand, Roy saves their lives by holding it. Thea marvels at his actions, but Roy insists that it wasn't anything unusual.[10] Roy continues evading Thea's questions and suffers alone when he accidentally harms Sin while testing his strength.[11] Thea's is generally unhappy that she can't help Roy, while Roy begins training with the Arrow, and questions how the Arrow thinks he can protect anyone while lying to them, stating that he himself wants to tell Thea what's going on.

After losing control again, Roy talks to Thea and tries to get her to leave the city with her family, fearing he will endanger her, but Thea refuses to do so without a reason. The Mirakuru affects Roy and he grabs Thea too hard, then flees horrified at what he's done, even though Thea knows he didn't mean to. Later while saving the Arrow, Oliver unmasks and welcomes Roy to the team on the condition that he never tells Thea the truth.[12] Roy attends Sara's welcome-back party at the Queen Mansion with Thea and Sin.[13] After Sara realises Slade Wilson is alive, she brings Diggle and Roy to the Queen Mansion to protect the family. Roy walks in the front door and sternly greets Slade Wilson, teeming with rage at Wilson's threat against Thea and the presence of him and Sara makes Wilson leave.[14]

A few weeks later when Roy goes on a mission with the team, his Mirakuru-induced rage takes over. Oliver talks to Roy and tells him that, for her safety, Roy has to stay away from Thea. Although Roy doesn't want to, he seems to listen to Oliver and when he later hurts a guest while working at Verdant, Roy tries to end things with Thea. She doesn't believe him and gets called away, so Roy cheats on her with another waiter. Thea knows Roy did it to push her away and is heartbroken, as is Roy who watches her leave Verdant on the monitors in the Foundry.[15] Heartbroken, Roy is livid when Thea is taken by Slade Wilson. Sara, Oliver and Roy go to find her, but Slade doesn't tell them where Thea is and they call the cops. With a manufactured alibi, Slade walks and Roy yells at the team, saying nasty things about Sara and attacks Dig. Roy disagrees with Oliver's choice and decides to leave the team, blaming Oliver for Thea's abduction. When Thea's found, Roy makes sure she's safe and okay, watching her from afar from the police station, before he leaves Starling City.[16]

When Thea realises Roy is wreaking havoc on the city, she sends him a message via the news broadcast of her mother's campaign party. Roy is having hallucinations of Thea telling him to kill her and once he sees the news, heads straight for Verdant. When he arrives, Thea tries to reach his true nature but Roy is almost consumed by the drug and attacks Thea, after which he has a brief moment of clarity where he asks the Canary to kill him. The Arrow shoots Roy with elephant tranquillisers and promises Thea that they will take care of Roy.[17] After Roy is cured from the Mirakuru, he reaches out to Thea who's relieved that he's himself again. They meet up at Roy's house and decide to leave town together, but Roy leaves to assist the Arrow. He doesn't tell Thea why he's going, but that she should pack and in doing so, Thea finds Roy's quiver and bow. Feeling that she can't trust anyone or anything anymore, Thea leaves Roy a note saying she does not trust him, that she's not capable of doing so anymore. She writes that she is leaving the city for good and never returning, that he shouldn't look for her as he won't find her.[18]

5 months after Thea left Starling City, nobody knows where she is but Oliver believes she's vacationing and Roy has a hard time handling whenever she's brought up in the Foundry.[19] In private moments he misses her, and after Sara's death he reveals Thea's note to Oliver[20], admitting that he feels responsible for Thea leaving. Oliver wants to have Thea home and Roy wants to come along to get her and so they travel to Corto Maltese. Once there, Oliver asks to talk with Thea first and Roy later seeks her out on his own. This is the first time in 6 months they've seen each other and Thea is bemused at Roy and Oliver, two people important to her who both lied a lot, have travelled there together.

Seeming to have thought about it a lot during their time apart, Roy apologizes for his behavior towards Thea. He listens to what she's saying about why she left and how she's been and tells her he just wanted her to be happy and is happy for her, although he does ask if she finds it lonely. Thea takes in Roy's more so selfless care for her and lets herself show concern for him, too. After Oliver pleads with Thea that he needs her, she decides to return to Star City to be close to her brother again.[21]

I don't do all that well with people I love getting hurt. Or worse
—Thea[22]

The ship is common and the most popular pairing for both Thea and Roy. In fanfiction, however, it is mostly written as a secondary pairing to other main pairings on the series. This is the most written AO3 ship for both characters 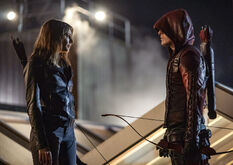 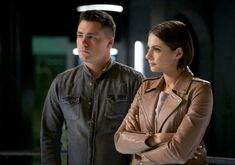 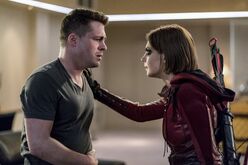 This Is Your Sword 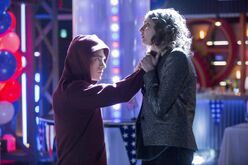 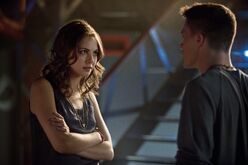 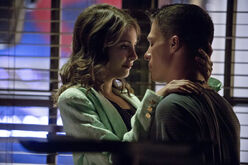 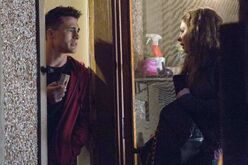 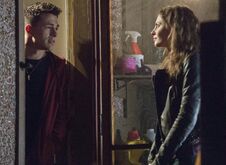