The Princess and the Frog
Once Upon A Time

Tianaveen is the het ship between Tiana and Naveen from The Princess and the Frog and Once Upon A Time fandoms.

As Tiana wishes on a star over the balcony, she notices a frog. She sarcastically asks the frog if he is expecting a kiss from her. The frog responds that kissing would be nice, and she backs into the room and screams. Naveen tries to explain himself to the frightened Tiana, as she throws toys at him before grabbing a book that she hits him with just as he tells Tiana his name and title. Hearing Naveen say that he is a prince shocked Tiana has she didn't wish for a prince, like her friend did earlier, and she had seen Charlotte dancing with "Naveen". As Tiana is about to hit Naveen with the book again, after he explained a very small part of the event that led to his unexpected transformation before showing her his froggy feet, as he keeps tripping over them, he notices that the said book is of the Frog Prince, the story that his mother's servants had read to him and since he is a prince that was turned into a frog, and believes Tiana to be a princess, he asks Tiana to kiss him so he could became human again. A request that Tiana has no intention of doing, as she had stated as a child that she would never kiss a frog. As Naveen begs Tiana for a kiss he "promises" Tiana that he will rewarded her with money that would allow her to buy whatever she pleases, seeing it has her chance to get her own restaurant she agrees to it as long as it is just "one kiss"; Naveen promises unless she were to beg "for more". Seeing Naveen's froggy lips had almost put her off the idea until she took a deep breath and closed her eyes before giving Naveen the said kiss; but Tiana being a non-princess, had gotten their kiss to turn her into a frog.

Angry for what happened to her, Tiana tries to take it out on Naveen, who had gotten the two thrown out of the room and onto the grounds that were being used to host the party. Because no one knew that they were originally humans who got magically turned into fogs, Naveen and Tiana got themselves cashed by Eli's dog, Stella, after they ended up in Charlotte's dress when they got themselves away from the band's drummer. Fortunately, the former humans were able to escape the party by flying on a few bellows, before they had left the party, however, Tiana learns that her new form allows her and Naveen to talk and understand other kinds of animals. As the bellows flew them away from New Orleans and above the bayou, Naveen official tells Tiana of how he had gone from human to frog; and Tiana didn't happen to learn that voodoo was the reason for the trouble she got herself into by kissing a talking frog. After wishing upon stars instead of relaying on hard work in order to reach her dream. When Naveen heard Tiana mention "hard work", he asks her why a princess has to do hard work in the first place, realizing the misunderstanding Tiana explains to Naveen that she isn't a princess but a waitress, a fact that Naveen wasn't happy about as it explains why their kiss didn't work and after Tiana calls him a "spoiled little rich boy" Naveen tells her that he is broke, a fact that shocks Tiana and gets on at him for being a lying as he had called her one. After the burst bellows landed them in the bayou Naveen confuses that while he is broke he plans to become rich again by marrying Charlotte and since he is a prince she'll take him without question; a fact that Tiana conforms with Naveen as they try to get away from a hungry herein. Because Tiana is still angry at Naveen for having no intention in helping her to get her restaurant, she was tempted to leave him to the gators until he promises her that once he marries Charlotte, as a human, he'll give Tiana the money she needs to get her restaurant; Tiana helps Naveen into a hollow tree so he can get away from them. Knowing that they'll be spending the night in the tree, since the gators claimed that they'll be waiting them "all night", Naveen attempts to bring Tiana close to him so they could share their body heat from the cold, Tiana pushes him away as she doesn't want his "slimy" body any where near her and her unset feeling towards him are still fresh.

The next morning, Tiana builds a raft boat that would take them back to New Orleans and undo the mess that Naveen got them into. Tiana expected Naveen to help her with the rowing, as it would be much faster, but instead the prince grabs a webbed twig to play music. While Tiana wasn't happy with Naveen's lazy actions, his music allows the two to draw the attention of a friendly, timid, trumpet-playing alligator by the name of Louis; who Naveen bonds with through their shared love of jazz music. As Naveen introduces himself and Tiana to Louis, he refers to her as a waitress that hasn't been kissed, a comment that Tiana took a fence to and became to rave about the trouble Naveen placed the both of them in through Voodoo. After hearing the word "voodoo", Louis tells them about Mama Odie, a voodoo priestess that lives deep within the swamp. Hearing this as a sign of hope, the two ask Louis if he can take them to her; to which he answers no because of his fears. While Tiana is willing to respect his design, Naveen on the other hand convinces Louis into changing his mind by telling him the possible solution to his "problem" that has kept him from reaching his dream. Tiana wasn't convinced Naveen's plan worked until Louis tells them "his idea" of asking Mama Odie to turn him into a human, and as the trio went on their journey they shaded their thoughts of what they would do once they became humans. After Naveen mentions his, Tiana reminds him that he is getting married as well as her telling him of what she has seen of his modesty and his lack of sense when it comes to his responsibility, and how she could recommend her father's advice to him.

At night fall the talk of the food that Tiana hopes to serve at her own restaurant, as well as Louis talking about the kinds of good food he would like to eat causes Naveen to be hungry; and when he saw a few bugs his new frog instincts causes his froggy tough to pass through his lips. When Tiana notices Naveen trying to catch his own food she giggles at one of his failed attempts, before her own froggy tough tries to get her to eat and catch a firefly and not long after Naveen notices the same insect, while Tiana tries to keep her frog instincts at bay, their toughs get caught up and knotted with each others; before their tangled-up toughs cause them to "fly" into each other. Louis tries to help them get unknotted but he only made it worse and went to find a stick, while the two former humans began to fight over their current situation that they blame each other for. As they fought the very firefly they tried to eat, Ray, sees them as a couple who got "carried away" despite the two opposing his assumption when he flew down to help them. After being freed from their tangled situation the two befriend Ray as they explain that they are actually humans who got turned into frogs and are making their way to Mama Odie for help, Ray explains to them they are heading in the wrong direction and takes it upon himself to help them find the kind voodoo priestess; as he gets his family to light their way. Both Tiana and Naveen were amazed by the beauty lights that Ray's family shines in the bayou's darkness. After they part ways with the firefly family, as much as they enjoyed the company of Ray's family and the beautiful lights they shine, while Ray takes Tiana, Naveen and Louis the rest of the way, he tells them about his lovely Evangeline; and while Tiana is taken by Ray's love for "her" she gets unset with Naveen when he advices Ray to keep his eye out for other firefly he could love.

The Princess and The Frog

The ship has support due to its canon status in a Disney movie. 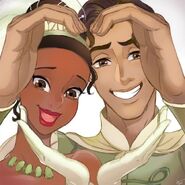 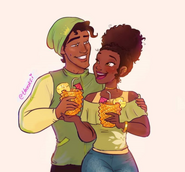