Tiduna is the het ship between Tidus and Yuna from the Final Fantasy fandom.

Tidus and Yuna first met when Yuna first became a summoner. Tidus had entered the Cloister of Trials even though he was not supposed to because he was worried about her safety. Later that night, they talked for the first time and realized that they would be traveling together for a while.

Later, Yuna learned that Tidus' father Jecht was the guardian of her father Braska. She decided that she wanted Tidus to become her guardian after that. However, Wakka was against this due to the fact that Tidus was inexperienced in battle and Yuna was afraid to ask because Tidus hated his father Jecht. However, Auron eventually becomes Yuna's guardian and drags Tidus along, so that is no longer an issue.

Eventually, Yuna agrees to marry Seymour because she believes that it's the best for Spira. This upsets Tidus because he wants her to marry the one she loves. However, it turns out that Seymour was corrupt and wanted to use Yuna for power. The group eventually kills Seymour and everybody is labeled as a traitor of Yevon. To make things worse, Yuna gets kidnapped and Tidus discovers that Yuna will die if she manages to defeat Sin with the Final Aeon. Tidus decides that he will not let her die. Later, Tidus talks to Yuna in a spring and apologizes for everything he said. He ends up comforting her and the two share a kiss underwater.

The group eventually decides that Sin should be defeated another way and Yuna does not obtain the Final Aeon. However, Tidus finds out that he is a dream and will fade away if they defeat Sin permanently. Tidus keeps this from the group but confesses this before their final battle with Yu Yevon, which Yuna seems to believe. After the battle, Tidus starts to fade away and Yuna tells him that she loves him. Tidus hugs her before jumping off of the airship and presumably disappearing.

About two years later, Kimahri finds a sphere of a man resembling Tidus in a cage who is begging to see the summoner and sends it to Yuna. She decides to become a sphere hunter and join Rikku and a new woman named Paine. However, it turned out that the man was a deceased person from Zanarkand who was threatening to destroy Spira. Eventually, Yuna and her friends manage to stop Shuyin and save Spira once again. As a reward, the Fayth approaches Yuna on the Farplane and offers to give Yuna another chance to be with Tidus. Tidus later resurfaces near Besaid and the two are reunited.

Tidus and Yuna continued their relationship and lived together in Besaid for a while. However, Yuna eventually found Tidus to be "too different" from before and they broke up within a year. Tidus then moved to Bevelle and started to play Blitzball again. Sin eventually came back so Tidus decided to join Yuna while she set off to try and get rid of the new Sin.

Tiduna is a very popular Final Fantasy pairing. The scene where they make out in the spring in Macalania is one of the most famous scenes in the Final Fantasy series. The ending of Final Fantasy X is also known to be a huge tear jerker because Tidus disappears and leaves a heart-broken Yuna behind. When a bonus video was released with the international edition, the fans begged for a sequel. Square Enix finally responded to the wishes of the fans and created Final Fantasy X-2. The fans were happy to see Tidus and Yuna reunited at the end. 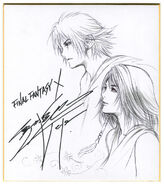