TimSteph is the het ship between Tim Drake and Stephanie Brown from the DC Comics fandom.

As Tim Drake, the high school student, he was dating a classmate named Ariana who had no idea about his second life. As Robin, however, Tim was seeing a fellow vigilante who called herself the Spoiler.

He and Batman had been tracking down the Cluemaster when he saw a mysterious figure scaling the rooftops and went after them. He unmasked the person, surprised to find a blonde girl under the hood. She then clobbers his in the face with a nearby brick and runs away. Tim later tracked down the vigilante and discovers she's a girl names Stephanie Brown, who's attempting to take down her criminal father Cluemaster.

The earliest days of Steph and Tim’s flirtation were a game of cat and mouse with Steph doing her share and then some of the chasing. She even wrote extensive entries in her diary about how dreamy Robin was, all while Tim struggled to figure out the right way to proceed. After all, this was far before Steph had been officially adopted into the Bat family, so it wasn’t as though Tim could take his mask off and tell her everything—and the matter with Ariana back at school wasn’t exactly an easy issue to solve, either.

The romance continued when the Cluemaster ordered Steph kidnapped by Gully Carson and his gang. Tim found out and came to rescue her, and she decided to thank him for saving her life the same way he thanked her when she saved his and pinned him forcefully to the ground and kissed him- in the middle of gunfire. Steph insisted on helping Tim wrap up the case as Spoiler.

Outside of comic books Tim and Stephanie has only appeared together in the third season of the TV Show Young Justice. In the episode Triptych, Robin and Spoiler along with Arrowette, and Orphan were tracking the Mad Hatter, who turned out to be Clayface in disguise. They followed him to a warehouse where they continued fighting the mind-controlled Clayface, but the real Mad Hatter blew up the warehouse. They escaped safely.

Stephanie Brown is largely accepted as the most popular love interest for Tim Drake. Shippers enjoy the dynamic between the two, specifically their "god you're so stupid but I love you" energy. TimSteph mainly rivals with WonderBird and TimKon. 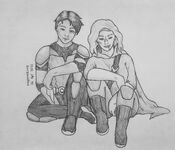 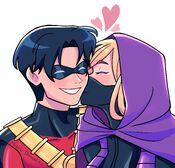