Rip – “Perhaps we will see each other again, my friend.”
Jonah – “Yeah. I reckon that'd be okay.”
— The Magnificent Eight

TimeHex is the slash ship between Jonah Hex and Rip Hunter from the Legends of Tomorrow fandom.

Before the events of Legend's of Tomorrow, Rip had been ordered by the time masters too fix a time aberration during the old west. While there he met Jonah.

When the team is hiding outside the town of Salvation, they cause a fight in a saloon, that Jonah ends up having to stop by firing a shot in the air. He tells them to follow him outside, where he reveals that he knows that they are time travelers and asks where Rip Hunter is.

The team brings Jonah back to the Waverider, where Rip becomes angry at them for deciding to pick up another person from the timeline, but stops when he realizes that they brought Jonah. Jonah turns from him and comments on how he didn’t get to see the ship the last time. Ray asks what Jonah means by last time, but Rip says that they won’t be telling the story. Rip asks what Jonah is doing in Salvation. Jonah replies that he was collecting on a bounty when the legends started a bar fight after one of them killed a member of the Stillwater Gang. Jonah explains that the Stillwater gang had been terrorizing Salvation, prompting Ray to want to help the townspeople. Rip says that it’s a bad idea, since the timeline would be put in danger by their meddling. Jonah comments on how it seems that Rip is already ready to leave town.

Ray, Mick, Jax, Leonard, Stein and Jonah return to the Waverider after they run the Stillwater gang out of Salvation, where Rip is waiting, mad that they’re continuing to change the timeline. Jonah isn’t very happy either, since it’s likely that the Stillwater gang will most likely just come back. The town will be fine with them there, but the second they leave, Salvation will just end up like Calvert. Mick asks what Calvert is, but Rip says it’s a closed matter. He asks Jonah for a word, and the two leave.

In the cargo bay Stein asks Rip to clarify what is so significant about Calvert, Oklahoma given that every time it’s mentioned he exchanges a look with Jonah. Rip explains that he was given a mission by the time masters that took him to Calvert, but after it was over he felt he was unable to leave, since he became so attached to the era. He ended up leaving but Calvert was attacked the very next day. Stein leaves to cure a boy of an illness as Jonah walks in. He tells Ray that he know where the Stillwater gang is and the two get set to leave. Jonah asks Rip if he’s coming with, but Rip just shakes his head no.

After capturing Stillwater and Jax getting captured, Jonah says that they should have a quickdraw at high noon. They win, Jax is free. Stillwater wins, he goes free. Stein asks if there’s a better way, and Jonah says that the best way would be to go after them with their tech from the future, but he knows that Rip wouldn’t allow it. Rip confirms that he thinks it’s a bad idea. As the team discusses who will be the one shooting, Rip comments to Jonah, how he can’t believe he’s encouraging it. Jonah says that it’s the only way, but Rip believes that Ray’s going to get himself killed. Ray says that Rip’s opinion doesn’t matter here, since he hasn’t left the ship since they arrived in Salvation. Rip says that he had his reasons, and that leaving the era was one of the hardest things he ever had to do, prompting Snart to ask why. Rip pauses before telling them that the era caused him to want to stay, and become a hero, the idea of it being very addicting. Jonah asks Rip that if he had know about Calvert, would he have stayed. Rip admits that he knew what would happen to Calvert, and Jonah punches him. Rip believes he deserved it, but Jonah believes that he deserves worse, since he knew and still left. Rip says that he had to know since he was a time master, but he still had to leave otherwise he could have done something that would have caused a major change to history and that’s why he had to leave, despite the pull that the era had on him. He also would have had to stop being a time master. He turns to the group and says that since he is no longer a time master, he will be the one to face Stillwater. He tells Jonah to send word to Stillwater’s gang about the shootout

Back in Salvation, Mick asks Jonah whether or not Rip can pull off the shootout. Jonah believes he can, but if he doesn’t he already called dib on his revolver. The shootout happens, Rip winning, but time bounty hunters show up at that minute. As they begin to fight the hunters, Rip gives Jonah a green laser pistol, but does mention that he’ll want it back. The two fight alongside together until all the bounty hunters are defeated.

Jonah finishes packing up his horse, as Rip walks over to him, questioning why he’s not staying, since Salvation does need a sheriff, implying that Jonah should take the title. Jonah says that he’s not a law or staying in place type, Rip saying that it’s one of the things they have in common. Jonah agrees. Rip wishes Jonah well, as Jonah reminds him, that for Rip he isn’t going anywhere. Rip says that they may meet again, and Jonah thinks that would be alright. He rides his horse out of town as Rip watches him.

During the events of Season 2 where Rip went missing, several theories emerged that he was with Jonah Hex in the old west. Similar one's also appeared at the end of the season when Rip left the Waverider, and it was unknown where he went.

Many fans of the ship were hoping to see the two interact when it was announced that Jonah would be in the finale, as would Rip. Shippers were disappointed to find that they didn't interact at all, and with Rip's death would not interact again. Shippers and fans who just enjoyed their interactions in season 1, were also disappointed that Jonah did not seem to react at all to Rip's death, given how close they had been. 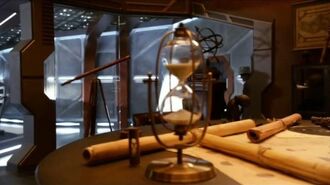 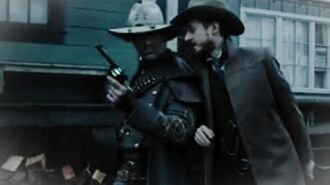 Retrieved from "https://shipping.fandom.com/wiki/TimeHex?oldid=162995"
Community content is available under CC-BY-SA unless otherwise noted.