Timehawk is the het ship between Rip and Kendra from the Legends of Tomorrow fandom.

Kendra meets Rip for the first time on a highway while arguing with Carter over her new identity as a superhero. Rip quips that they could get couples' counselling and flashes a light source at them both. Kendra wakes up on a roof in Star City, along with a bunch of other people to Rip introducing himself and, to Kendra's horror, the revelation that Vandal Savage was not destroyed. Rip informs her that only she or Carter can kill him, or he can be resurrected, and in Rip's time he has conquered and destroyed the world. Rip gives them 3 days to consider his offer. Kendra's not enthusiastic, but agrees to let combat with Carter decide the outcome. They show up and are presented with the Waverider and as they come aboard, Kendra's mesmerised by the future time ship. Rip presents them with Aldous Boardman, the person he hopes can give them an idea of Savage's location. Everyone's advised to strap in for their first journey back in time as Rip surreptitiously mentions that it can cause bleeding from the eyeballs, at which Kendra is horrified.

They go to meet with Professor Boardman and learn that he is Kendra and Carter's son from a past life. They insist on bringing him when they have to return to the Waverider, which is under attack. In the crossfire, Boardman is gravely injured. Rip mouths off to the team over the disastrous first outing and Kendra punches him in the face and takes him at the scruff. Kendra demands the truth about their assailant and Rip finally reveals that he's no longer a time master and the bounty hunter has been sent for him. They also learn that Savage killed Rip's family, the reason for his mission and that Rip had a son, much like Kendra has just learned that she did. Aldous sadly dies from his injuries and when Kendra tells Rip, he offers his sympathy and apologies. Kendra says it was her fault for bringing him, but Rip doesn't let her take the blame, informing her that in certain instances 'time wants to happen' and you cannot change the outcome. Kendra agrees to stay on the team to fight Savage, as does everyone else.[1]

I won't let Carter's remains be desecrated by that monster; I won't let him win again. And when Kendra wakes up - and she will wake up - she can give her soulmate a proper farewell
—Rip to Sara[2]

After their mission to try and destroy Savage, which sees Carter killed, Kendra is injured and wakes up distraught in the med bay. A horrified Rip looks on as Kendra cries that it was her fault and he empathetically takes her face in his hands and tries to console her. Gideon administers a sedative for Kendra and Rip is at a loss for words at how his mission has cost one of the Legends their life.[3] Kendra's crashing as there are fragments of the dagger in her blood and Rip and the others watch on helplessly. When Rip learns that Savage has Carter's body and plans to use it for some despicable ceremonial purposes, he is outraged and changes the plan to honour their team mate's memory. After they rescue Carter's body from Savage's cult, Rip goes to check on Kendra in the med bay and is glad to see that she's awake and okay. He promises her that they will help her get ready to kill Savage when the time comes. The team buries Carter and Rip says some words honouring him and Aldous Boardman.[2]

When the team infiltrate the Pentagon to get Savage's current whereabouts in 1986, Kendra seems overtaken by her inner hawkgoddess and mercilessly attacks personnel. Firestorm lifts her out of there and they return to the ship. When Sara approaches Rip about Kendra's problem, he at first tells Sara to give Kendra time to deal with Carter's death. As Sara presses on, Rip asks Sara to help Kendra contain or get some form of control over her powers. After Sara's bloodlust surfaces, Rip finds a sore Kendra in the hallways and confesses that he paired them not only for Sara to help Kendra, but vice versa as well.[4] While planning to get Stein, Ray and Rory back, Kendra and Jax are benched. They protest when the team has found a way to get into Koshmar, and Rip yells at Kendra in frustration that he won't give up the two people Savage wants the most. After contacting Stein, Kendra and Jax confront Rip about being able to help save the mission, and Kendra learns that Rip partly blames himself for Carter's death, telling him it wasn't his fault. Rip agrees and they make the play, successfully. Savage finds Kendra and is a creep to her for the nth time, who tells him off. Rip appears, putting a gun to Savage's head and Kendra leaves.[5]

The ship is a rare pair, as Rip was most immediately following the premiere of the show shipped with Sara, whom Kendra was also shipped with while dealing with 3 canon suitors. The scene where Rip comforts Kendra and her fearless confrontation with Rip had fans see them as equals who do care about each other's plight. 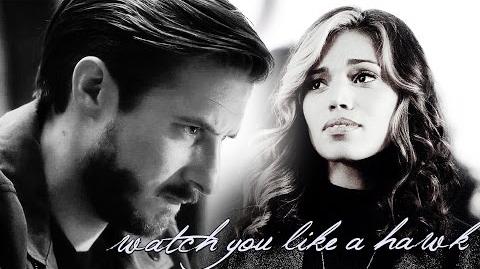