Shipping Wiki
Register
Don't have an account?
Sign In
Advertisement
in: Ships, Ships/Poly, My Hero Academia/Ships,
and 9 more

TodoBakuKiriCamie is the poly ship between Katsuki Bakugou, Shoto Todoroki, Eijiro Kirishima and Camie Utsushimi from the My Hero Academia fandom.

Katsuki, Shoto, Eijiro and Camie got teamed up in Team-Up Missions. Katsuki, Shoto, and Eijiro arrive at the entrance to the amusement park “Future Park”, where they meet who they will be teaming up with, Shiketsu High’s Camie Utsushimi. Eijiro enthusiastically introduces himself to her, which she says gives off “Inasa” vibes to her. A small man dressed like a clown appears and introduces himself as the “Chief Executive Officer” of the park, and the one who requested them from the Team-Up Missions, as well as saying they have free reign to do whatever they want in the park. He escorts them out of the park, slightly confusing the four until they enter a different place neighboring Future Park, “Retro Land”. The CEO reveals that the place used to be a great success, but ever since Future Park opened up next door, business hasn’t been doing well, and they don’t have the budget or resources to compete. Katsuki surmises that they’re there to help drum up business, as the CEO hands each of them scripts, stating his plan for them to be on a Hero show.

He explains the story involves a villain attacking the citizens, the heroes arriving on the scene, struggling against the villain in battle, but cheers from the audience inspire the hero and the day is saved. Eijiro is excited about the classic storyline, though Katsuki considers it as just cliché. The students practice for the show alongside professional cast members, led by a female wolf playing the villain, and get to the part where the heroes are defeated. Eijiro acts over-dramatically, Camie underperforming, Shoto remaining still-faced, while Katsuki yells he’d never be beaten by a villain. The wolf tells them to try and take it more seriously. She tells them that they haven’t decided what order their group formation will be and to get back to her when they do. Camie and Katsuki proceed to argue over which one of them should be in the center, with Camie saying cause she’s the oldest and Katsuki cause he’s the strongest. Eijiro tries to calm them down until he sees Shoto staring at a mechanical animal, realizing he wants to ride it. Since they were told to enjoy themselves, Eijiro supports it, especially since he hasn’t been able to go to a theme park since he started high school. Shoto, however, laments that he’s never got to go to a place like this before. Hearing this, Eijiro pushes Shoto on the animal, encouraging him even more as the two head off to go on some rides, with Camie following.

Katsuki angrily remains alone while the three go on the carousel and roller coaster, calling them babies. Eijiro then proposes to Katsuki that they use the spinning teacups to decide who gets the center position in the hero show, and wheoever’s the least sick wins. He taunts Katsuki enough to make him accept, being the one to intensely spin it as fast as possible. In the end, Shoto is in the only one unscathed, while Katsuki, Eijiro, and Camie reach the point of vomiting. On the day of the hero show, two cameramen arrive, preparing to shoot the show as "experts", hoping for something more than their expectations. The students put on the show alongside the cast members, all the while the CEO watches on, happy at how hard the students are working for Retro Land’s sake. He’s then suddenly approached by an associate of Future Park, grabbing and demanding that he sign over the land to them so they can expand Future Park, with the CEO refusing to destroy Retro Land. The students head backstage during their downtime in the show when they spot the CEO in trouble, recognizing the ones assaulting him as villains. The associate states Future Park’s plan to expand, siccing his two assistants on the students. Camie tells the others they have to go back on stage, but Katsuki, Shoto, and Eijiro stay to deal with the villains first, swiftly taking care of them. However, one of the villains laughs that Retro Land is still done for, as their Plan B was they had earlier dismantled some of the roller coaster rails, so that the “accident” will bring enough bad press to shut the park down and allowing Future Park to swoop in. Hardening up, Eijiro quickly rushes over to stop the rollercoaster.

Meanwhile, with the heroes not showing up for their cue in the hero show, Camie decides to improvise. Using her Glamour Quirk, she creates an illusion of Shoto, who appears and seductively tells the villain to be a hero instead. His beauty causes the wolf to lose her cool and accidentally agree, confusing the audience that she suddenly switched sides. Needing to continue the ad-lib, Camie creates an illusion of Eijiro, who declares that he’s the villain, just making the audience even more confused. At the same time, Eijiro is on the track, catching the rollercoaster and attempting to stop it. Katsuki appears grabbing onto Eijiro and is about to blast an Explosion to stop them, but Eijiro tells him not to or else everyone in the park will freak out. However, Shoto tells them it’s okay, because somehow, Camie’s performance of the hero show has captured everyone’s attention they won’t notice. Katsuki executes an Explosion great enough to stop the coaster, while the two cameramen tear up over the conclusion of the play, as the “villainous Eijiro” was won over by the “hero Katsuki”, with the rest of the audience cheering on, and Camie getting tired from Glamour overuse. The CEO and the wolf thank the students, the villains are arrested, and a recording of the hero show gained enough attention that has led to Retro Land gaining more crowds, however also resulted in Katsuki, Shoto, and Eijiro gaining more of an unintended fanbase, as the two cameramen secretly watch them from the bushes.

This ship isn't particularly popular in the BNHA Fandom, but even though it's not, almost all of the ships except for KiriCamie gained a pretty much fair amount of fans to become one of the most popular ship in the BNHA fandom (TodoCamie, BakuCamie, TodoBaku, KiriBaku). The Team-Up Mission Squads also isn't very popular compared to the other squads (Disaster Squad, Bakusquad, Dekusquad, etc), so TodoBakuKiriCamie didn't get so much attention, even if they got, it's separate ships (Duo's). 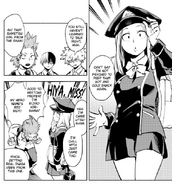 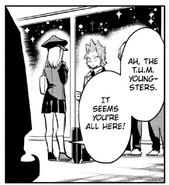 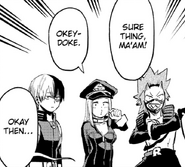 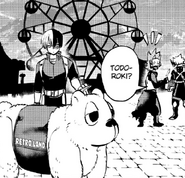 (They're all actually Camie)

(They're all also Camie)