Camie – “Literally so hot a feast for the eyes.”
Shoto – “Uhh… Thanks”
— The Ultra Analysis Data Book

TodoCamie is the het ship between Shoto Todoroki and Camie Utsushimi from the My Hero Academia fandom.

As he, as well as Katsuki happened to fail their Provisional License Exams, Shoto was assigned to a temporary remedial course to make up for, and eventually earn the license. Two Shiketsu students shared the course with him and Katsuki: Yoarashi, who failed because of a feud with Shoto, and was the reason for Shoto’s own failure, and Camie, who never partook in her own exam, as she had been kidnapped and replaced by villain Himiko during its duration.

Shoto arrives to his first exam with Katsuki, where they’re greeted first by Camie. She walks up to them, saying, “Who’s this sultry looking two-toned boy?”, in reference to Shoto. She continues with, “You’re like, super hot. I’m crazy psyched to train with a total babe like you.” She proceeds to ask Shoto for his phone number, which he gives her. As Camie continues to fawn, Seiji and Yoarashi arrive. Seiji tells Camie not to associate with ‘U.A scum’, although this does not deter her.

The students are then brought to their first assignment: to win over a group of rowdy primary school students with communication, rather than brute force. Lacking social education, Shoto finds himself struggling with the task, and is soon dubbed “Five Weenies” by the children, who evidently lack respect for him. On the other hand, Camie immediately gains the acceptance of the boys, thanks to her femininity and fondness for children, but the girls find themselves a bit jealous of, and ignore her. After struggling to verbally bond with the kids, Camie suggests that the four of them show off their quirks in hopes to impress the kids.

As they do, a female student attacks “Shoto”, but he dazzles her with a beautiful, sparkling face. However, this “Shoto” is revealed to be a product of Camie’s quirk, ‘Glamour’, which gives her the ability of illusion(s). Katsuki finds great humor in the situation and laughs, creatively dubbing Camie’s illusion Shoto “Maboroki” (Glamour-roki). This has Shoto contemplating the situation, and he questions if it were really that funny.

Through the course of the series, Katsuki has shown no potential romantic interest in any female class, nor schoolmates, which led to a fandom-wide desperation to find a heterosexual romance option for him. This led to the popularization of BakuCamie upon Camie’s debut, although Katsuki did as little as laugh at her ‘Maboroki’ joke. This, combined with the lack of Camie’s canon appearances, led to TodoCamie, as well as InaCamie to have a very, very small fanbase and [amount of] fanworks, despite Camie’s interest lying seemingly more in Shoto. Even so, the ship does have its followers, and as a ‘rare-pair’, correlates well with many other ships at similarly low popularity.

The Remedial Course arc is considered rather underrated when compared to arcs such as the Hideout Raid or Endeavor Agency for example, and so some tend to turn their affections to it in hopes of keeping it, and the fanbases of Camie and Yoarashi alive. Alongside this come the popularization of ships within the group, more specifically those aside from TodoBaku and BakuCamie, as those already hold their ground. In this scenario, InaBaku tends to be paired alongside TodoCamie. Sometimes, BakuSei or InaSei is the pair that got paired along side it.

Camie's Relationship with Shoto on the My Hero Academia Wiki 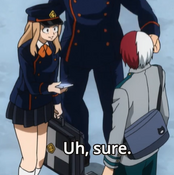 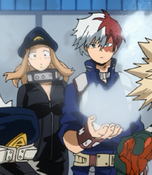 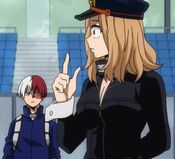 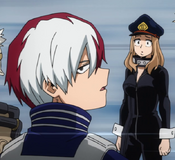 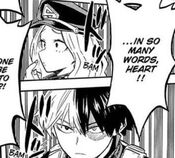 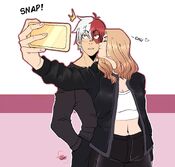