• Battle Couple
• Hair Contrast Duo
• Savvy Guy, Energetic Girl
• You Are Better Than You Think You Are
• Everyone Can See it
• Like an Old Married Couple

TodoMomo is the het ship between Shoto Todoroki and Momo Yaoyorozu from the My Hero Academia fandom.

Momo and Shoto are friendly with one another. They have many similarities, such as entering U.A. through recommendation, hailing from famous yet strict hero families, being from wealthy families, having powerful quirks, and being dubbed the prettiest people in their class. As a result, Momo commonly compared herself to Shoto and believed that he was always a step ahead of her, lessening her already low self-confidence. However, this also caused her to admire Shoto for having brimming self-confidence as a hero. Fortunately, Shoto was able to lift her confidence excessively.

On his part, Shoto has a deep respect for Momo's observational skills and natural leadership, even having voted for her during the Class President election, as he thought that she excelled at the role of being a leader. He later chose Momo for his team at the Human Cavalry Battle in the Sports Festival, although she soon felt she had no use other than to follow his orders.

In a drama CD, Shoto and Momo happen to run into each other during the Ennichi festival. He asks her to join him, and after a moment of consideration, she agrees. Shoto complimented Momo's yukata that she wore to the festival, saying, "It fits you well." They also talk about themselves and their experiences. The other girls in class 1-A saw Shoto with a 'cute girl' and suspected he and the girl were on a date. The girl, of course, being Momo.

During the festival, Momo asks Shoto if he enjoys Ennichi or not. Shoto replies that he neither likes nor dislikes it, prompting Momo to ask, "If so, what are you doing here?" Shoto says he wanted to try coming here for once since he's never been to any festival before. He continues by saying that usually, people do this with their family; it is obvious and a normal thing to do. Shoto then looks sad as he tries to talk about his own family; however, he cuts himself off in the process and apologizes to a concerned Momo. He mutters to himself on why he's telling this to someone else. He prepares to head home with a sad look, and as Momo calls out for him, fireworks fire off into the sky. Momo then looks at him with a smile and says that she is not 'someone else' but rather a classmate friend of his from the hero course.

The next day at school, in another translation, Ochako and Toru question Shoto if he went to Ennichi yesterday or not. When he says that he was, the girls ask who he was with. Exactly at that time, Momo walks in and greets her classmates. As she sits down next to Shoto, Ochaco and Toru blush at them both with happy faces.

In the cavalry battle, Shoto acknowledges Momo's power by choosing her to be on his team. During the End of Term Test arc, Shoto and Momo were paired up by Aizawa. It was eventually revealed that Momo felt insecure in comparison to Shoto. Even though they started out the same, enrolling into U.A. via recommendations, Shoto has proved and improved much more than Momo. When Aizawa almost catches Momo, she runs back to Shoto. Shoto then gives her support and shows his admiration for her by informing her that he had voted for her during the Class Representative Elections because "I thought you'd be good at that sort of thing!!!". This, in turn, gives Momo courage, and they carry out her plan. As the plan succeeds, Aizawa and Shoto compliment her, which leads her to tear up. Being the dense person he is, Shoto gets worried and tells Momo that a pressure point on her foot could help her if she feels nauseated. . Fortunately, Shoto was able to lift her confidence excessively (seen in Yaoyorozu: Rising).

Shoto and Eijiro Kirishima had asked for Momo's help in trying to locate Katsuki. At first, she was reluctant. But after consideration, she decided that she "Trusted Todoroki" and helped them on their mission. At the Donki store, they have a conversation about why they had entered the store when Momo could have just used her quirk to create the items. When Tenya, Izuku, and Eijiro flew off to save Katsuki, the two of them were left in the dark alleyway alone. During the Provisional License arc, Shoto was the first to pass stage one. When Momo entered the Anteroom (Holding Room for candidates that have passed) with Mezo, Tsuyu, and Kyoka, she seemed genuinely happy to see that Shoto had passed already. When Shoto failed the certification, Momo, alongside Izuku, was worried for him.

When Shoto decides to stay behind and hold off the villains with Katsuki so everyone and the others can escape, Momo calls out his name in worry before he disappears from view.

In addition to his own commentary during the Yaoyorozu vs. Kendo match, Shoto joins the protest against Vlad King's biased commentary.

When Endeavour was fighting the Nomu, Shoto was filled with anticipation when he was watching from the television in the common room. Upon entering the common room, which was filled by his other classmates, Momo turned around and called his name while feeling very worried for him. In the 1-A vs. 1-B arc, when Itsuka fought against Momo, Shoto commentated certain lines, such as

"If Kendo separated Yaoyorozu from her team out of caution, then I think she's misjudged her."

"If she actually wanted to be cautious of Yaoyorozu, she should have crushed her four on 1 with her entire team's power right from the outset."

Shoto comments that "...I hope she doesn't get all discouraged again upon losing to Kendo." In the Official Drama CD titled "Ennichi Festival", Shoto and Momo spend the night together at the festival. After expressing his feelings about his family to Momo, he initially thought he was burdening her. Momo then reassured him that he should express his feelings more as the whole class is important to him and he is important to the class. In the Official Drama CD titled "Donki Store", Shoto, Tenya, and Momo look around the store. As Tenya and Momo are fascinated by the number of items and prices in the store, Shoto judges them for their zealous behavior and constantly reminds them that they are on a mission to rescue Katsuki.

In the Official MHA Smash Manga, they refer to another as 'We're made for eachother...' They also get nervous at similr times throughout the Manga, Smash and Anime.

“If Kendo separated Yaoyorozu from her team out of caution, then I think she's misjudged her.”
— Shoto to Tetsu Tetsu about Momo.

“Yaoyorozu you're on this team? We must have a connection.”
— Shoto to Momo in the official My Hero Academia game.

“Pairied with Yaoyorozu again.. guess it's destiny.”
— Shoto in the My Hero Academia game if the player chooses to match him up with Momo.

“You're amazing, Todoroki-san.”
— Momo to Shoto.

Hagakure – “Well, if we're talking about a Prince, then it's gotta be Todoroki!”
Momo – “It totally makes sense for it to be Todoroki!”

“Todoroki-san and I? The two of us together? But... It does look better and more natural than going by myself at the festival. Besides, almost everyone around me is going in groups.”
— Momo thinking to herself when Shoto asks her to go to Ennichi together.

Momo – “I thought of a special operation to beat you, Todoroki!”
Shoto – “I'm not gonna fall for your plan so easily. I can't let my guard down though. You're good at that sort of thing.”
— Shoto - 'We're made for eachother...' directed at Momo in the BNHA Smash Manga.

A common trope in fan art is comparing the two to Fullmetal Alchemist characters; the most common being Hawkeye and Mustang, but others are also seen. Artists will draw the two in the other characters' clothes and even redraw scenes from the anime/manga. On AO3, TodoMomo is the third most written for Shoto and the second most written for Momo, falling behind MomoJirou, TodoDeku, and TodoBaku. It is also the fourteenth most written in the My Hero Academia tag.

This ship is widely known in fandom because of the fans' rather complicated and sometimes even love-hate attitude towards it. On the one hand, it is the most popular het ship in the franchise after IzuOcha and KamiJirou; it's even considered the second by amount of ship tease ship of its kind, TodoMomo gets a pretty significant amount of hatred due to its obvious threat to MomoJirou, the most popular femslash ship in the fandom. The obvious popularity of a number of slash ships with Shoto also complicates matters, which is why many discussions about this ship often become flamebait, and TodoMomo support is fundamental for many of its supporters. 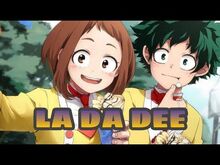 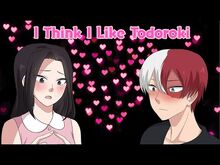 I Think I Like Todoroki (My Hero Academia Todomomo Comic Dub)