• Pair the Smart Ones

Togiri is the het ship between Byakuya Togami and Kyoko Kirigiri from the Danganronpa fandom.

Initially, Byakuya and Kyoko did not have a good relationship. During their killing school life, Byakuya had always been suspicious of Kyoko.

In Chapter 3 of Danganronpa 1, Byakuya is suspicious of Kyoko because of her sudden disappearance during the time of both murders. In Chapter 4, Kyoko warns Byakuya that he shouldn't underestimate others' emotions, as it may one day turn against him. At the time, Byakuya shakes the remark off. However, Kyoko's warning comes true later in the chapter when Byakuya is unable to figure out who the culprit was because he didn't take into consideration that Sakura could want to end her own life and that Aoi could act irrationally due to her friendship with Sakura. In Chapter 5, Byakuya goes as far as to take Kyoko's room key because she couldn't tell him what her reason for selection at Hope's Peak Academy was.

Eventually, it seems like they learned to work with each other during their time at the Future Foundation, possibly because they both had their memories returned. This can be seen that, despite his background and title, he is willing to be the vice head, working under Kyoko. When Kyoko was thought to have been killed during the Final Killing Game, Byakuya refers to her presumed death as a "great cost" for hope to finally triumph over despair.

In one of the two’s events together, Kyoko says the Monokubs work hard, and Byakuya asks if she came to obverse them like him. Though, she replies saying she just came to check on them, and Byakuya calls that a interesting coincidence. Both then agree on thinking the Monokubs will betray them. and Byakuya says he can’t waste any more time on them, leaving.

The ship emerged as a result of Byakuya and Kyoko being two of the three main characters of Danganronpa 1, along with Makoto Naegi. Some fans prefer to ship them together due to both of them having a rather cold and cynical personality. Another similarity warmly welcomed by the fans includes both of them being the most useful characters during the investigations and Class Trials, aside from Makoto.

Some fan fictions tend to show them having crush on each other, despite their rather unfriendly beginnings during Killing School Life. They might feature the two of them investigating the deaths of their fellow classmates together, as opposed with Makoto. Its main rival ships are Naegiri and Naegami, although some fans enjoy the dynamics between all three, resulting in Naegamigiri. While this ship remains one of the most popular shipping choices for both characters included, it's the least popular combination among the aforementioned trio, mostly as a result of the other two ships having much more fleshed out relationships with each other. Other major ship rivals include Celesgiri or Celesgami. 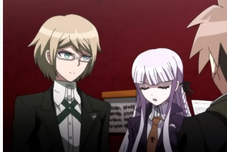 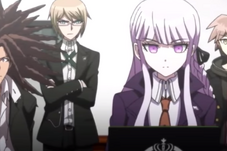 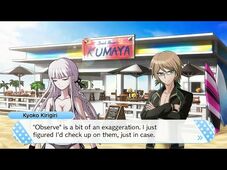 Naegamigiri refers to the ship between the two and Makoto Naegi