Tojoshi is the het ship between Kirumi Tojo and Ryoma Hoshi from the Danganronpa fandom.

Ryoma seems to hold a lot of respect for Kirumi, seeing that she works hard to please others while still holding respect for herself. Despite having zero will to live, Ryoma seems up to assisting Kirumi when she needs help with something, even if she says she can handle it.

Despite getting killed over it, Ryoma was willing to give up his life for Kirumi, understanding and respecting her intense will to live, wishing he had one. After seeing his Motive Video, given to him by Maki, he gave up on living entirely when he'd looked for one to begin with. Being asked to meet up with Kirumi in his Ultimate Lab, he was already her target. Taking advantage of his weakness, she told Ryoma about her motive video, being the Prime Minister of Japan and expressing passionately how she needs to save them all.

Recognizing the killing intent in her eyes and demeanor, Ryoma goes on to say he respects Kirumi for having such a big reason to live, chiding that he himself has none. Proceeding to turn his back on her, telling her he was going to pick up the tennis balls, she exploited this opportunity by hitting him over the head while his back was turned.

Although Kirumi killed Ryoma for her own gain, she doesn't seem to hold any particular malice or hatred for him. She wanted to fulfill the request of her people, and used him to do so.

The two share one event in Danganronpa V3's bonus mode, Ultimate Talent Development Plan, with Peko Pekoyama. In it, Ryoma notices a cat, but it runs away, apparently due to Peko's dangerous aura. Kirumi offers to search for the cast, along with Gundham Tanaka and Shuichi Saihara. Ryoma also joins. Both he and Peko rely on Kirumi to find it.

In one manga adaptation[1], Kaito visits Ryoma in his room and sees him wearing a bath robe, along with Kirumi Tojo inside his room. He asks what kind of situation it is. Ryoma explains that the faucet broke and the water splattered over him. When Kirumi saw him soaking wet, she sewed together a few towels to improvise a bath robe for him.

“Kirumi, could I get you to clean my room later?”
— Ryoma asking Kirumi to clean his room in Chapter 2 of New Danganronpa V3: Killing Harmony.

Kokichi – “That's right. We know your motive to kill, but why did you kill Ryoma specifically?”
Kirumi – “Because he was easy to kill.”
— Kirumi explains why she chose Ryoma as her victim.

Gonta – “Ryoma not that weak! When he use his Shukuchi Method, even Gonta no could catch-”
Kirumi – “His physical strength was irrelevant when he did not have a reason to live. Without that, he became the weakest among us.”
— Kirumi explains what she meant by Ryoma being "easy to kill."

“So...you got a reason to survive... That's the complete opposite of me... Heh... That's good... If you've got something to live for, it means your life has value. Hmph...”
— Ryoma letting Kirumi claim his life.

Kirumi – “Shall I search for the cat, then? We still have time until the opening ceremony begins, so I can track it down and rescue it.”
Ryoma – “That's a good idea... This is an emergency, so I'll ask for your help here. Of course, I won't make you do all the work. I'll look for it, too.”
— Kirumi offers to search for a missing cat for Ryoma and Peko, and Ryoma offers to help.

Ryoma – “Hmph...I'm relying on you, Kirumi.”
Kirumi – “Leave it to me. I will fulfill this request for the both of you.”
— Ryoma relying on Kirumi and Kirumi promising to fulfill her request for him and Peko.

The ship sailed mostly as a result of the polar opposite contrast between the two that was shown when they became a victim and a culprit respectively of the Chapter 2. As Angie Yonaga put it, Ryoma had no reason to live while Kirumi had too many reasons. Fans like to use this concept in fan fictions. A lot of fan fictions and fan arts about the two show Kirumi taking care of Ryoma, much to his happiness. This is also helped by her motherly nature and his childish appearance. 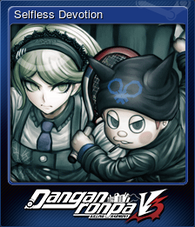 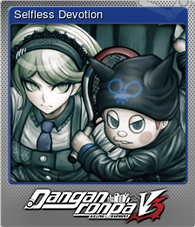