TokoTsuyu is the het ship between Tsuyu Asui and Fumikage Tokoyami from the My Hero Academia fandom.

Fumikage and Tsuyu are partnered on Team H for their Battle Trials as the ‘hero’ team against their ‘villain’ opponents of Team J, Eijiro and Hanta . As their matchup is a rather late event, given their team letter’s late stance in the alphabet, they remain watching their fellow classmates’ battles play out, standing directly next to each other. As they watch Katsuki and Tenya fight, against their opponents of Izuku and Ochako, Fumikage comments that even though Katsuki and Tenya “lost the battle, they won the war,” to which Tsuyu adds, “This class is intense.” Later, when their trial begins, the two are briefly shown as they roam one of the many hallways in the battle spot, searching for the enemy. However, the outcome of the fight is unknown.

Tsuyu and Fumikage are paired for the combat section of their Final Exams to fight against their teacher, and pro hero, Ectoplasm. The combat pairs were formed by those with similar weaknesses and would be likeliest to fall impervious to their selected opponent. However, it seems unlikely that the similarity was less of having animal attributes and more of a difficulty fighting against multiple enemies at once. The previous and first exam of Eijiro and Rikido against Cementos ends rather quickly, leaving the two with hardly any time to strategize.

As soon as they encounter Ectoplasm, who, as Tsuyu had earlier surmised, was waiting for them at the escape gate. He immediately spawns a number of his clones around the two, and they all come at them at once. Fumikage uses Dark Shadow to throw Tsuyu onto a platform above them as they rush to evade their enemies. Before the clones can grab Fumikage, Tsuyu uses her frog-like tongue to pull him up alongside her. Watching this, Ectoplasm commends their teamwork before heading on to pursue them at their new level. As they run, Ectoplasm creates more clones to block off their path. Fumikage finds himself struggling to keep away all the close-range attackers, but Dark Shadow manages to take down the ones in front of him. A few appear behind him, but Tsuyu supports him by striking them down before moving them to another higher level with her tongue.

When they finally reach the escape gate, the real Ectoplasm is still standing there. He uses his ultimate move, ‘Giant Bite Detention,’ to trap them. Tsuyu then creates a strategy on how she and Fumikage could defeat him; Fumikage recalls Dark Shadow and gives him something Tsuyu gave him, which turns out to be a set of handcuffs (these could be used to defeat the enemy) from earlier, which she’d swallowed before the exam (her quirk allows her to puke her stomach, including its contents). Dark Shadow manages to handcuff Ectoplasm and allow the two to successfully pass their exam, although not without another comment on their exceptional teamwork, which is the evident root of their victory.

This ship sailed as a result as being matched in their quirk training, in addition to both having animal characteristics (Tsuyu as a frog and Fumikage as a bird). This ship is also well-known in the fandom, so that's why it gets much appreciation from the fans. It is the most written for Fumikage and the second most written for Tsuyu. While most of the ship's fanart commonly depicts them as a princess and her prince in fairy tale A.U.'s, since Tsuyu's frog quirk typically has most TokoTsuyu, fans portray her as Tiana from Disney's The Princess and the Frog, or to have her as the frog while Fumikage shows the prince who kisses her. There is fanwork that has Fumikage's shadow being friendly with Tsuyu or tries to get him to ask her out.

Some fan art and fics have the two meeting each other before they attended U.A.. Because Tsuyu has a friendly personality while Fumikage has a stoic-like one, fans see Tsuyu being the one who goes up to him or has Fumikage admiring her from afar. Tsuyu's Frog Quirk has inspired fans to draw the two in the rain while sharing an umbrella. TokoTsuyu fans commonly ship it beside TodoMomo, KiriMina, IzuOcha, IidaMei, KamiJirou, BakuCamie, and even BakuDeku, when they aren't rivaling TokoTsuyu with TokoShoji, TsuChako, and MidoTsu. There have also been occasions when TokoTsuyu has been paralleled with MiruHawks, as it too is mostly based on the animal themes of the pro-heroes' quirks.

On AO3, the ship has over 454 fanfics, while FanFiction.Net has 45, with only 23 placed under pairing in the My Hero Academia category. Along with TokoTsuyu having reasonable fanbases on both Tumblr and DeviantArt. 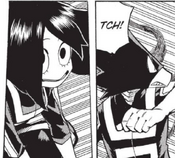 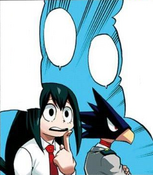