Tokokuro is the femslash ship between Mukuro Ikusaba and Toko Fukawa from the Danganronpa fandom.

Prior to the Killing School Life, Mukuro and Toko were both classmates in Class 78th at Hope's Peak Academy. However, The relationship between the two during this time is unknown.

In Danganronpa: Trigger Happy Havoc, Mukuro (who was masquerading as her twin sister, Junko Enoshima) and Toko were both participants in the Killing School Life. During the first chapter, it was shown that neither of the two girls liked each other, and would often fight and argue over petty things. When the group met in the dining hall to discuss their respective investigations, Mukuro was annoyed that Toko and her group didn't do any actual searching, and asked her why they just sat around the gym the entire time. Toko answers by saying that nobody invited her along, and then blames the others for leaving her out. Mukuro tells her that if she wanted to go with someone, she should've said something. Toko then remarks that she wouldn't want to go anywhere with a "dirty slut" like her. Mukuro is shocked by the insult, and Toko adds on by saying her mind is as thin as her body, and that she makes her sick to her stomach. Mukuro is dumbfounded by Toko's rudeness, and asks how she could say something so awful to someone she just met. Their fight is then broken up by Sayaka Maizono and Yasuhiro Hagakure, the former remarking that the two sounded so close that they were fighting like sisters. In another scene, Sayaka runs out of the A/V room, greatly disturbed by the contents of her motive video. Toko remarks that she personally doesn't care what happens to her, and Mukuro criticizingly calls her thoughtless.

In the non-canon, but popular Danganronpa: Trigger Happy Havoc IF, the two girls share somewhat of a moment when Mukuro is forced to turn Toko into Genocide Jack. But before that, she apologizes while Toko just seems confused that she’s getting attention.

In Danganronpa: The Animation, Toko can be seen fainting after Mukuro is impaled by the Spears of Gungnir, likely due to her hemophobia.

The two girls share one event together in Danganronpa S: Ultimate Summer Camp, along with Mikan Tsumiki. However, Mukuro is once again disguised as her twin sister. In their event, Mukuro comments on the awkward atmosphere, and while she doesn't blame anyone for it, Toko is quick to tell her that things got tense the moment she looked at her face. Mukuro denies this, and says there isn't any bad blood between them, but Toko says they don't have any "good" blood either, and that the more they talk, the worse it gets. Mukuro then remarks to both Toko and Mikan that they are too negative, and that Toko shouldn't make claims without proof to back it up. Toko then asks for a suggestion on how the three of them can get along, and Mukuro answers that while combatibility is important, opposites attract too, and brings up Toko's relationship with Komaru and Mikan's relationship with Ibuki as examples. Toko ackwnoeldges that Mukuro has a point about Komaru Naegi and her, and Mukuro says that sometimes it's difficult to get along with someone when you're too similiar, such as the three of them. Toko then asks what about her and Mukuro are similiar, and Mukuro ponders a bit before answering that they're both girls in the same school year.

“Yeah! It sounds like you two are so close now you're fighting like sisters!”
— Sayaka calling Mukuro and Toko's bickering "sisterly."

The ship between the girls likely came from their constant bickering in the first chapter being seen as "sisterly." Though because of Mukuro dying shortly after, these interactions are largely forgotten about.

While the ship is a rarepair, it should be noted both characters have some similarities. Both are introverted and socially awkward, and they both are hopelessly obsessed with a blond individual who they would listen to no matter how harmful their orders are. These commonalities would make it easy for the girls to sympathize with each other. 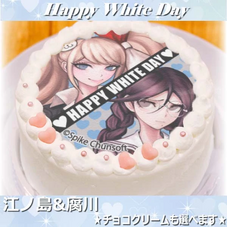