• Opposites Attract
• The Power of Friendship

Tokomaru is the femslash ship between Toko Fukawa and Komaru Naegi in the Danganronpa fandom.

In the Demon Hunting Game, Toko appears and helps Komaru through. She has a tendency to refer to her as “Omaru” as an affectionate nickname.

Komaru is shown to respect Toko, and admire her as a strong, skilled, and overall amazing person. She doesn’t seem to mind the “serial-killer” half of her split personality, writing it off as "just a bit strange", and nothing more, though Toko strongly disagrees with this and says that she is nothing like that. On the other hand, Toko finds Komaru and her occasional slow-wittedness and gullible nature irritating, along with her tendency to call herself a "normal girl", and the way she breaks down crying when things get bad. However, she offers Komaru support and encourages her to improve during such tough situations.

When Toko "officially" agrees to assist Komaru, she hugs Toko in happiness, which makes Toko uncomfortable due to her not being used to physical contact. Toko is also noted to make most of their decisions, due to Komaru being too unsure to do that. She also remains rather silent about many topics, even if she is actually familiar with them. Toko is also strongly annoyed by Komaru's love for manga, because she hates them.

In Chapter 2, Toko is shown to be suspicious of Shirokuma and appears slightly protective of Komaru due to her gullible nature. After they enter the Resistance's secret base, Toko and Komaru sleep the night in the same bed, though Toko feels cold because Komaru stole her blanket while sleeping. Komaru agrees to assist Shirokuma and the Resistance with newfound confidence, surprising Toko and making her uncomfortable, because she does not want to contact the Future Foundation.

Later, when the two manage to contact Makoto in Chapter 3, Toko even threatens Komaru's life in order to protect Byakuya Togami who is currently the enemy's hostage. After getting out of the building and the danger, the two have a big argument over this, as Toko claims she is serious about her threat if needed. Komaru is shocked that Toko would kill her friends, but Toko just seems to assume that Komaru is only trying to manipulate her with nice words such as "friends". Saddened, Komaru tries to tell Toko that she truly does trust her, and Toko appears to feel slightly bad but stays silent. When Toko accuses Komaru of doing nothing on her own, but Komaru thinks that is way too mean to say, because she has done some things too. Toko asks if Komaru is expecting her to thank her or something and claims she has never done that to anyone. In the heat of the moment, Komaru shouts that is the reason why Toko doesn't have any friends. Toko is shocked and hurt by this, and then tries to claim that she wants to be alone and would rather die alone than be with a coward like Komaru. However, she still continues to follow Komaru to the Resistance's base, claiming that she has to. However, the two remain mostly silent during the whole way back.

When Toko accuses Haiji of cowardice back in the Resistance, Komaru surprisingly speaks back to her, sympathizing with the Resistance's weak people. This seems to shock Toko a bit, as she assumed Komaru would be on her side. Komaru accuses Toko of not understanding the weak and blaming them for it, but Toko says that she simply blames them for using their weakness as an excuse. Toko is angered and offended when Komaru says that she doesn't understand weak people, stating that she is obviously very weak too, but has stopped using it as an excuse and tries to survive. A bit later, after Genocide Jack saves Komaru from Kotoko, Komaru breaks down crying and apologizes for saying horrible things like that Toko doesn't have any friends. The two then make up and work together again.

In Chapter 4, after Nagisa decides to help the two escape, Toko hesitantly seems to be willing to let Komaru go and leave the city. However, the Servant appears and it's revealed that Toko was forced to assist Komaru and bring her to the children's base, so that she can be exchanged with Byakuya. Komaru is shocked to hear that Toko has lied to her the whole time, with Toko obviously feeling very guilty. However, she then continues to speak mean words and even attacks Komaru with the aid of Genocide Jack, but Komaru realizes she isn't being serious and wants to give Komaru a chance to escape and make her own decision. Genocide Jack and Toko then decide to turn against the Servant, claiming that they wish to protect Komaru and Byakuya. In turn, Komaru decides not to hold the supposed betrayal against Toko, as she was forced to do it, and decides to stay with Toko because they are friends. Toko is immensely happy by this and blushes shyly, because she has never had a real friend before. Afterwards, she thanks Komaru very genuinely for the first time and begins to call her Komaru instead of the somewhat insulting nickname Omaru. After this, the two become real friends, with Komaru trying to teach Toko about friendship, with the two still a bit comically bickering at times. Toko begins to be more nice towards Komaru and genuinely considers her an extremely important person to her, rivaling her love for Byakuya. In Chapter 5, Toko has also shyly claimed while blushing that Komaru has made her happy and it's indicated that Komaru has helped Toko's mental state greatly.

In Chapter 5, Toko snaps Komaru out of it in the time of despair, and swears to help Komaru whenever she can't do something on her own just like Komaru would do for her. Toko gives Komaru a very warm, genuine smile and hugs her, which is extremely notable coming from Toko who normally hates hugs and being touched. After defeating Monaca and rescuing Byakuya, the two stay in Towa City to help its people and wait for Makoto. They also keep sleeping in the same bed, though Toko claims that she does that only because of her fear of ghosts.

Komaru and Toko are seen still together in Towa City in Danganronpa 3, with Komaru somewhat unsuccessfully trying to get Toko used to bathing which she fears. They have a mission to defeat Monaca, but it ends in Monaca's surrender and Komaru saving the two of them from falling. Many months later, they are seen building the new Hope's Peak Academy building along with everyone, and Toko gives a very genuine happy smile when Komaru offers her a drink after the hard work.

Komaru is mentioned by Toko in Danganronpa V3: Killing Harmony's bonus mode Ultimate Talent Development Plan, when she has to pick her "best friend" for scavenger hunt during Summer's sport festival, and she laments that she can't pick someone who's not there. She then decides to pick Makoto, because their "surnames match", indicating that Komaru is her best friend in this alternative universe as well and that they just obviously don't go to the same school. However, this is translated incorrectly in the official English version, with Toko inaccurately stating she has no best friend and with no mention of the matching surnames.

“Until now, I kept relying on you, and I never really got to make decisions on my own. But I was like that even before I met you. I used to give up all the time... But the decision to save everyone was one I made on my own. Of course, I'm scared, and I'm worried... But despite that, I've made up my mind. I won't give up until the very end. I'll make sure I protect both. I think I got it from you. You were with me all this time. If I have changed... It's your influence, Toko.”
— Komaru says she changed thanks to Toko.

During an interview with the crew behind Another Episode, Kodaka states that the game is about "The deepening friendship between Toko and Komaru."[citation needed]

The ship naturally sailed as a result of the two being the main characters of Ultra Despair Girls and their friendship being one of the main plots of the game. Having a lot of heartwarming moments together, supporting each other and overcoming their fights and differences helped to further fuel the ship. Thus, the ship easily became the most popular ship for both of the characters included.

It is the most written ship for Komaru on Archive of Our Own.

With the two developing a deep friendship with each other and living together in Towa City before the peace in the world is restored, as well as with Toko saying that both Byakuya and Komaru are important to her and that she'll protect both of them, a lot of fans started shipping the two romantically. A lot of fanfictions and fan arts portray the two as having romantic feelings for each other rather than best friends. In fact, this ship seems more popular this way. Some people although prefer Toko and Komaru as friends. In some fan fictions and fan arts the two are presented as just the best friends. This is especially the case for the shippers of Togafuka who wouldn't want this ship to come in their way. However, a lot of Togafuka's shippers also like this ship, thus often choosing to ship Toko in a polyship with both of them. 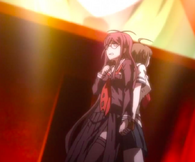 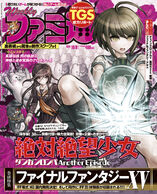 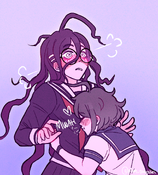 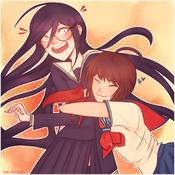 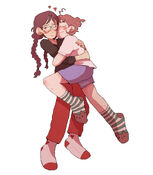 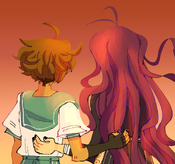 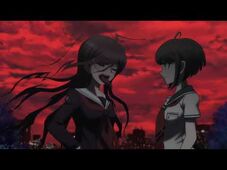 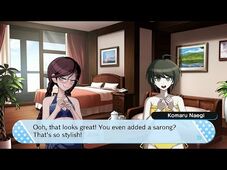 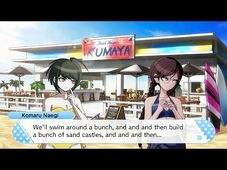