Toliver is the slash ship between Oliver and Tommy from the Arrow fandom.

Tommy and Oliver were best friends since they were young. After Oliver was believed to had died, Tommy mourned him, but also went through different ways to try and find a way that Oliver could be alive. Once Oliver returned to Star City, Tommy wanted everything to be the same, but Oliver was too changed by his time on Lian-Yu as well as taking up his time being the Hood. Tommy finds out that Oliver is the Hood and a rift is driven between them. The two make mends but are driven apart again. When Tommy goes to the Glades to save Laurel a building falls on top of him. Oliver reaches a dying Tommy but is unable to save him. To honor his friend Oliver vows to stop killing as the Hood.

Oliver and Tommy grew up together. They became best friends when they were very young and Tommy always found comfort and solace in being at the Queen Mansion, where Robert Queen was a sort of father figure for Tommy, something Tommy needed in lieu of his own cold and distant father, Malcolm Merlyn. Tommy's mother died when he was 8 years old and Oliver was by his side at the funeral. Tommy's father left him for two years and Tommy considers the Queens his family, much more so than his father. A few years later they meet Laurel and Sara Lance, becoming lifelong friends with the Lance sisters too. As they grow older, both Oliver and Tommy become increasingly reckless party boys, who with all their riches can do whatever they want, including raucous parties that get them in trouble with the law.

After high school they both start college, but Oliver drops out. Not long after Oliver starts dating Laurel Lance. Tommy and Oliver continue their reckless lifestyle until Oliver goes missing when the Queen's Gambit capsizes in 2007 and is presumed dead.

While Oliver's on the island and everyone believes him to have drowned along with Sara Lance and Robert Queen, Tommy, in the first while, doesn't believe it's true and goes looking for Oliver. When Oliver's in Hong Kong, he manages to briefly log onto his e-mail and Tommy, who's believes Oliver is still out there somewhere, takes this as a sign that Oliver's alive. Tommy travels to Hong Kong in order to find out more, but is targeted by Waller, with Oliver holding the gun. To avoid assassinating his best friend, Oliver pretends to be a criminal, abducts and scares Tommy, convincing him that the e-mail was a trick to lure the wealthy Queens to Hong Kong in order to blackmail them for ransom money. Tommy believes the abduction and doesn't realise he was inches away from Oliver, who is pained at having to take such extreme measures to protect Tommy, unable to reveal that he's actually alive.[1] Tommy also takes to looking after Oliver's sister, Thea, who becomes unhappy and lonely following the deaths of her brother and father.

Oliver is in the foyer when the door opens and Tommy Merlyn walks through the front door. He tells Oliver that he told him that yachts suck, and Oliver smiles. Oliver turns around and he and Tommy hug, Tommy telling Oliver that he missed him. At dinner, Tommy thinks over things that Oliver missed, and tells him Superbowl winners, Obama being President, and the ending to Lost. Tommy tells Oliver that they’ll go into the city and catch up on stuff. Oliver asks to be excused and Moira nods yes. Thea looks to him as he leaves, and Tommy says not to forget about tomorrow.

Tommy walks into Thea's room where Oliver is joking that he wished he gotten a souvenir t-shirt from Oliver. Tommy says the city awaits, and he and Oliver leave the room. Tommy asks Oliver if he noticed how hot Thea got, but quickly says that he definitely hasn’t as Oliver gives him an angry look.

As they speed through Star City, Tommy says that Oliver’s funeral blew. Oliver asks if he got lucky, and Tommy says yes, since all the women were sad and affectionate. Oliver jokingly expressing disgust. Tommy says he expects the same environment for Oliver’s welcome home bash, confusing Oliver. Tommy says that Oliver being back is cause for celebration, and he’ll take care of everything. Tommy asks what Oliver missed the most, and Oliver answers Laurel. Tommy tells him that Laurel is the one person who isn’t happy that Oliver’s alive.

Tommy says that now that they’ve taken care of talking to Laurel they can now make up for lost time, when suddenly they’re attacked by several men. After escaping, Oliver checks Tommy’s pulse to see he’s alive.

As Oliver walks down the stairs of the club, Tommy sees him and smiles. Tommy gets the DJ to cut the music as he meets Oliver, placing his arm around Oliver’s shoulder and yelling that the man of the hour is here, much to the crowds cheering. He yells that the ladies need to give him a proper homecoming, and follows Oliver through the crowd, and giving him a shot for his toast.

Tommy walks over to Oliver and says that Oliver most likely hasn’t had sex in over 1000 days, and as his wing-man recommends one of the girls onstage. Oliver sees Thea and tells Tommy he’ll be back in a minute.

As Quentin questions Tommy, Oliver walks up telling him that it’s a private party, Quentin leaving after the confrontation. Tommy watches as Oliver comes down from the table, and tells him that it’s quite the coincidence that Oliver chose the building across from Hunt’s for the party, and by the same guy that rescued them. Oliver tells Tommy that if he were him, he’d just be glad that he’s alive. Tommy asks what happened to Oliver on that island, and Oliver says a lot, before walking away.

A rarepair in the fandom, and more popular as a gen pairing, however Oliver does love Tommy in a way he is not seen loving any other male character in the series. Both having been in love with Laurel also put a strain on their friendship and possibly shippers. 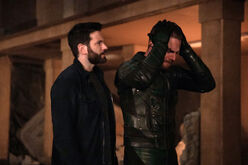 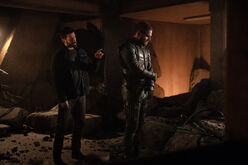 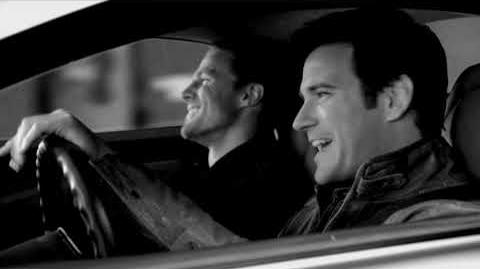 MerLanceQueen refers to the ship between Laurel Lance, Tommy and Oliver