Worn... too many times to be honest

Tommy x Shirt is the cargo ship between TommyInnit and raglan shirts from the Dream SMP fandom.

While Tommy is normally seen with a plain red and white raglan shirt, it has been shown that Tommy has other raglan shirts. He has been seen with blue, yellow, green, grey and other raglan shirts. In Tommy's vlog at a water park, it was revealed that Tommy owns a "swimming edition" of the red and white t-shirt. Following the reveal, Tommy commented on how itchy the shirt was and how he wanted to get wet. Realizing how that comment could sound, Tommy laughed about it with Jack Manifold.

Tommy's Minecraft skin often shows him wearing his red and white shirt and he rarely changes his skin to not have it. During Tommy's second exile, his shirt is slowly ripped as his character's mental health worsens. Instances of when Tommy changes his skin out of his red and white shirt are when he wears the L'Manberg uniform or a business suit. These instances don't happen often though due to L'Manberg's destruction and the fact that the business suit isn't often worn.

While many jokes are made about Tommy and his shirt, the cargoship isn't as popular as Tommy x Coke or others like Philza x Samsung Smart Refrigerator and Wilbur x Brown M&M. As Tommy is uncomfortable with being shipped with people, there aren't any ships with people that can rival Tommy x Shirt. People, namely TommyInnit fans or "inniters", often refer to red and white raglan shirts as "TommyInnit shirts". Fan art of Tommy often shows him wearing the red and white shirt or something similar. While some people sometimes change Tommy's shirt to a long sleeve shirt or a hoodie, the red and white color scheme often remains. 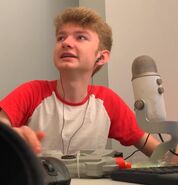 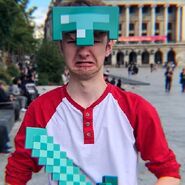 Tommy wearing the "swimming edition" of his red and white shirt