TomoKazu is the slash ship between Kaedehara Kazuha and his friend from the Genshin Impact fandom.

Kazuha and Tomo were good friends and close traveling companions for a period of time. One day, Kazuha's friend asked him about a sword art of which he had heard, the Musou no Hitotachi. Kazuha told his friend that it could only be witnessed when "divine punishment" is administered and that it was the pinnacle of the Raiden Shogun's skill, a symbol of ultimate power. Kazuha's friend replied that there must be someone who could withstand it, and that "there will always be those who dare to brave the lightning's glow."[1]

When the Vision Hunt Decree was enacted, Kazuha had to go into hiding. While on the run, he had heard that his friend had challenged the Vision Hunters to a duel before the throne. Kazuha's friend dueled with Kujou Sara, who had accepted the duel on the Raiden Shogun's behalf, in Tenshukaku. The defeated would face punishment from her.

Although usually a calm person, Kazuha drew his sword and stormed into Tenshukaku when he had heard of this duel, but he arrived too late. The duel was over and he had seen his friend had lost, his blade broken into pieces. Kazuha ran away with his friend's dying vision in his hand, not wanting his friend's ambitions to be engraved into the Omnipresent Statue. The dying vision possibly burned his right hand and thus be the reason for the bandages on his hand in the present.

He didn't regret coming out of hiding for his friend or begrudge his friend for leaving him, but he did ask himself if conflict was the only way to assert one's ideals. Kazuha also wondered what expression was on his friend's face during his friend's last moments.

Kazuha would remain silent when any of the Crux's sailors spoke to him, likely because he was mourning his friend's death. While Kazuha eventually started talking to the sailors, he still thought of the death of his friend.

Kazuha made his friend's masterless Vision the grand prize of the Crux Clash, hoping to find someone who could reawaken it and carry on his friend's ambitions.

After it was stolen, Kazuha thought of a plan to have the thief reawaken the Vision, which didn't work. The Traveler also could not rekindle the Vision upon Kazuha's request.

At the end of the quest, Kazuha leaves the Vision at his friend's grave and pays respects to him. The Vision can be seen slightly lighting up while Kazuha walks away.

“To have met merely by chance and then form such a strong bond, there must be a fated connection between them... so, although they would part ways for now, surely they would meet again. Or so Kazuha thought.”
— Kazuha's Story IV

“His friend's sword lay shattered in pieces, his Vision now an empty husk. Now a wanted man himself, Kazuha fled with grief in his heart.”
— Kazuha's Story IV

“In his last moments, what expression was on his face?”
— Kazuha about his friend's death

“All I knew was that I mustn't let his hope which burned so brightly become buried among the ice-cold statue of a god.”
— Kazuha explaining his thoughts after running off with his friend's vision

“There will always be those who dare to brave the lightning's glow.”
— Kazuha's friend to Kazuha

While TomoKazu is fairly popular within its fandom, other people would rather ship Kazuha with Scaramouche or Gorou. Some would also argue that Kazuha's friend is dead, so it would be impossible for the ship to be canon. Despite these reasons, there are 540+ works on AO3 of the pairing. Many TomoKazu shippers started shipping it after seeing the cinematic showing Kazuha's backstory. Others only shipped it after Kazuha briefly reawakened his friend's vision.

Kazuha's friend's name has not yet been revealed. Because of this, fans use the name "Tomo" for Kazuha's friend, which is short for tomodachi, meaning friend in Japanese. Tomo's voice actor has referred to Kazuha's friend as Tomo before.[2]

There are many that wish for a reunion between them, either hoping that Kazuha's friend is still alive or theorizing that Kazuha may die at some point. This was most prominent when the 2.1 Version Trailer was released, as it showed Kazuha fighting the Raiden Shogun. Many feared Kazuha would lose that battle, and thus be reunited with Tomo in death.

On Twitter, a Tomo x Kazuha week took place from October 26 to November 1, though people can still take part in it after the week ends. Participants are given prompts for each day of the week and they can make fan content based on those prompts. 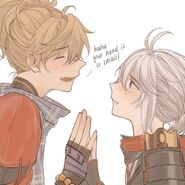 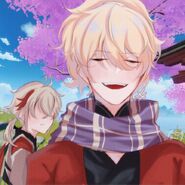