ToruMina is the femslash ship between Toru Hagakure and Mina Ashido from the My Hero Academia fandom.

My Hero Academia- Ending 8 | Footprints: Toru is shown as she runs up to Mina to hug her tightly. Mina smiles as she moves to put her hands seemingly on Toru’s waist.

After the Final Exams, Eraserhead announces a summer camp (the Training Camp) rather than allowing the students to spend their summers freely. The 1-A girls gather around a desk to discuss this. Mina complains that she’d just bought a new swimsuit, and was upset that she wouldn’t be able to wear it, adding that she’d wanted to have fun during the summertime. Toru then asks if she’d like to meet up at the school pool over vacation. Mina says that it’s much better than being cooped up at home. (Additionally, the two are seen very close together in Minoru’s fantasy about the girls in bikinis, and later at the pool, in their school-sanctioned swimsuits.) When the time comes to head to the camp, the two sit together on the bus to their location. As they ride, Toru shifts her body around excitedly, and Mina watches her with a smile. Later, after being booted from the bus at the mock “rest-stop”, Mina and Toru stay together through the ordeal.

As the class fights against Pixie-Bob’s ‘Earth Beasts’, Toru acts as a lure for the beasts by screaming to draw them to her so Mina, as well as their other classmates could have an easier shot at attacking. The girls high-five each other in the middle of this. After surpassing this obstacle, and making their way to the campsite, they eat dinner across from each other.

The Training Camp is cut short after Katsuki’s kidnapping by the LoV. After he is brought to safety, U.A implements dorms to the school to keep the students in one place in hopes to prevent another ordeal of the sort. Afterwards, the students move into their respective rooms. The 1-A girls come up with the idea to have a room contest. Mina and Toru are the ones to approach the boys with this concept by (Mina) saying “Well, the girls were all just talking right now..” Toru completes her sentence with “and we have an idea.”

During the “Room King/Queen Contest”, Toru and Mina express the most intensity/excitement over the event. Fumikage stands over his door as to prevent entrance, but the two push him aside and enter. They proceed to judge his, and later, the remains of the boy’s rooms (minus Minoru’s, as he was a creep, and Katsuki’s, as he was asleep) together.

After coming to the conclusion that Ochako is crushing, the girls begin to interrogate her as to find out this potential romance. Mina and Toru spend the most time questioning her, and are the last to back down from the subject.

After the entire class fight against Mirio, Toru and Mina loudly question him about his quirk, and all the different tricks he pulled with it. Later, they sit on the dorm couches together. Mina states that Mirio’s “zero to hero” backstory was amazing, and Toru excitedly agrees.

The six girls of 1-A are all notably close, but certain girls are notably close, and even intimate with one another, these (duos) being Ochako and Tsuyu (TsuChako), Momo and Kyoka (MomoJirou), and Toru and Mina (ToruMina), although ToruMina is occasionally overlooked due to either girl’s background status in the story. However, their bond is prominent enough to draw attention, especially as they share much of their limited screen-time (especially on Toru’s part) together. The ship is one of the most popular for either girl, and Toru’s most popular femslash pairing.

The ship has about 230 fics on AO3, allowing it to be proven as far above ‘rare-pair’ territory. 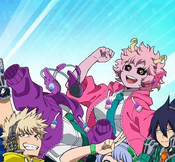 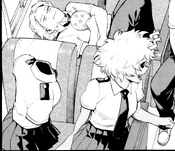 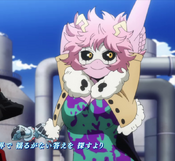 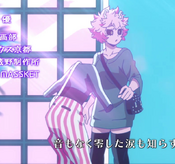 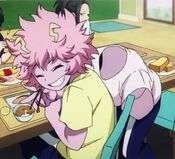 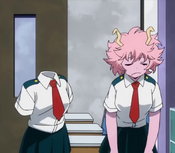 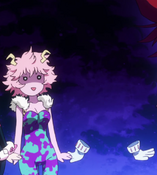