Traffic Lights is the poly ship between Angie Yonaga, Himiko Yumeno, and Tenko Chabashira from the Danganronpa fandom.

In Chapter 1, each member of the trio was included in Kaito's group to fight against the mastermind. This is also when Angie's first attempts at manipulating Himiko took place.

In Chapter 2, Himiko became Angie's best friend, being completely dependent on her Atua, much to Tenko's dismay. Chabashira tried several times to convince Himiko to think for herself. Angie came up with the idea of a magic show performed by Himiko, which resulted in the latter being a major suspect during the case. When even Angie suspected her during the trial, Tenko felt disgusted by how easily she abandoned Himiko.

In Chapter 3, both Himiko and Tenko were a part of Angie's Student Council. However, Tenko only pretended to believe in Angie's Atua and once again tried to convince Himiko to think for herself. When Angie found out that Tenko came along with Maki Harukawa and Shuichi Saihara to convince her not to go with the motive, she saw Tenko as a traitor, but seemingly forgave her. As a result, so did Himiko after being informed of what happened. After Angie's death, Tenko volunteers to be inside a cage for Korekiyo's ritual so that Himiko could speak to her now deceased best friend one more time. Before that, she also tells Himiko not to be afraid of expressing her emotions. However, participating in the ritual ends with Tenko as the second victim of the case. Himiko seems greatly affected by both deaths. During the trial, her friendship with Angie and Tenko becomes tested as she becomes a major suspect for the case again.

Starting after the case, Himiko starts expressing her emotions more, just how Tenko wanted her to. Himiko would also remember both Angie and Tenko dearly.

The ship sailed as a result of a sort of "love triangle" between the trio. With Tenko having a canon one-sided crush on Himiko, Himiko being closer to Angie most of the time, and Angie and Tenko being involved in a sort of rivalry over Himiko, some fans had trouble deciding between which ship to support, hence the formation of this one.

Reminiscent of a love triangle, the ship became quite popular. It's one of the most popular trios in the fanbase. The fanarts and fanfictions would usually reference Angie and Tenko fighting over being Himiko's best friend. 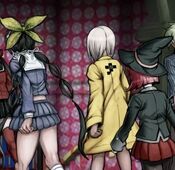 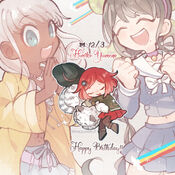 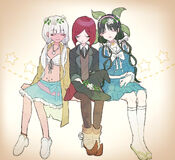 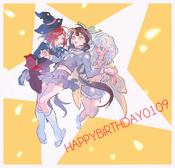 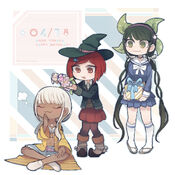 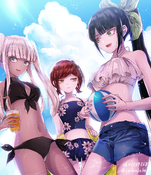