Training Montage is the femslash ship between Akane Owari and Ibuki Mioda from the Danganronpa fandom.

Akane and Ibuki were both members of Class 77-B, as well as participants of the Killing School Trip.

Both are bold in their talents respectively, with Akane's habit of eating and fighting, and Ibuki's hyperactive behavior. The two of them are not the brightest in Class Trials either; only presenting one piece of evidence in the trial Hajime Hinata can actually use or completely getting a clue misinterpreted.

Ibuki and Akane are also a target of Hiyoko Saionji's relentless teasing. This is due to their carefree and gullible natures. However, Hiyoko had stopped teasing them because they were just too gullible.

When fighting with Nekomaru Nidai, Akane tends to become more persistent and determined. This leads to her becoming injured despite the times she says she's unharmed. In both instances, she fought with Nekomaru in Chapter 2, Ibuki was around to comment and was visibly concerned.

When fighting Nekomaru the first time on Chandler Beach, Ibuki screams which causes Hajime to run over and she exclaims "The killing is started again!", despite the gymnast and coach only training. Ibuki is surprised at Akane taking so much damage from Nekomaru, although Akane is wobbling away after the fight, and says "[Akane's] probably gonna get even stronger." After the second time and showing up to the diner, she's bloodied from training. Ibuki is taken aback by Akane and mentions the blood on her makes her reminiscent of the horror movie character, Carrie, before asking if she's okay.

In Chapter 3, Ibuki is a victim from being strangled. After arriving to the scene of the crime, Akane is appalled by a culprit striking again. She tries her best to participate in trial, despite getting clues misconstrued like how Hiyoko's key wound up in her kimono and defending Mikan Tsumiki when the nurse became suspect.

In Despair Arc and Danganronpa 2.5, the duo fail to speak often. However, there are a couple of shots of the two standing nearest each other, showing they are in good terms.

The ship is a rarepair within the Danganronpa fandom, with a limited amount of fan works dedicated to it. Despite its small coverage, there are fans who are attracted to the potential dynamic between the two.

Ibuki and Akane are bold to the point of having recognizable traits; Ibuki is random, upbeat and pinning her as the musically talented type, while Akane is eager for food, fiery and athletic. Together, they have the "two unstoppable forces" ship dynamic, making some fans believe their energetic natures would perfectly (and chaotically) sync up as a couple.

Their usual emotions may sync up outwardly, but their own thinking sync up. Ibuki loves people who think and act individually and Akane acts on her own instincts and trusts her own gut feelings. They both has sentimental sides to them; in her Free Time Events' ending, Ibuki admits that she longs for a deep, interpersonal relationship with someone, while Akane admits and shows that she is afraid of being seen as weak and hesitates a lot. This could make their relationship behind closed doors actually very tender and sweet.

While Ibuki longs for specifically a platonic relationship, most ships can be considered both romantic and "bromantic". As they are already friends, their relationship could be considered a "gal pals" dynamic. 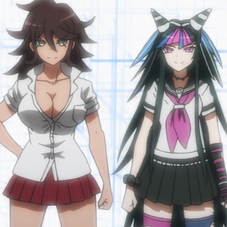 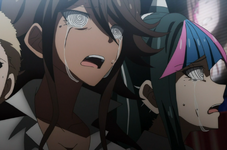 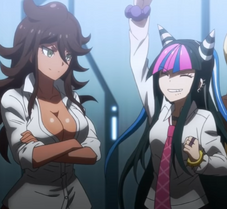