“I am everything that I am needed to be!”
— Trigon to Arella

TrigElla is the het ship between Trigon and Arella roth from the DC Comics fandom.

Arella was a Christian, her father was very strict, her relationship with her family was bad, which led to her running away from home. She ended up joining the satanism group, they wanted to give a bride to a demon and Angela was chosen, they managed to summon the demon, it was Trigon who appeared to them. Thus Angela met Trigon for the first time, form, Angela agreed to go with him, she was fully aware that he was a demon.  They made love, while they did this Trigon appeared to Angela in his true demonic form, Angela was surprised. At this moment, Trigon smiled with an evil smile; Angela knew that Trigon was planning a great thing. She argued with him, Trigon brought her back to Earth. It was not mentioned why he returned it to Earth, but later it was found that he said: “I took your mother gave her my seed, then returned her to earth lest my enemies slay her before you were born.” to Raven from The new teen titans (1984)

Trigon sent Angela to Earth and their relationship became incomprehensible At least for Angela, but Trigon was waiting for her to give birth to his child, Angela meanwhile, was confused and frightened when she knew she was pregnant with a demon child.  She chose to commit suicide; At that moment people from  Azarath appeared to her, they took her with her until she gave birth to her daughter Raven.

She took care of her daughter; Arella loved her daughter more than anything. Until Trigon appears on the Azarath, Arella meets Trigon again, and knows he wants to use their daughter as a tool, in order to enter and destroy the Earth, Arella tries to protect Raven, but Trigon turns her back, refusing to kill her for saying; “I still have several years, need of her"

They met a lot and a lot, it was strange that Trigon had never tried to kill her. Trigon turns her back her every time, and prove to her that she is a weak human and laugh with every arrogance.

“One of the versions, Trigon recounted how he met Arella in his true demonic form”

where he said; Meet Arella with his true form, Arella accepted him and lived with him, she was pregnant with his child, Arella stayed with him until give birth to their daughter a few months later, Arella knew Trigon's purpose was Earth. A dispute has occurred between them! rebellious Arella didn't accept that their daughter be a tool, Arella doesn't want to harm her kind (the humans), arrogant Trigon Can't imagine there was a woman opposing him, The conflict didn't end for good between them, it ended up that Arella took Raven and she quickly left Trigon (run away). She managed to escape and ended up on Azarath.

The relationship between them

Trigon does't admit to himself that Arella is exceptional for him, he is bossy, arrogant, He sees himself as the greatest demon in the universe, and he can't admit it that he completes with something else. while Trigon said in Teen titans (2011) , he wanted Arella to stay with him to raise Raven. he convinced himself that Arella must stay with him, In order to raise Raven and learn her best! this is what Trigon convinced himself. he is arrogant ,he can't admit that he is the greatest thing in the universe complete with something else, (This is the main idea, which Trigon get out of.) so found himself a better way to express this. The absolute truth, Trigon believes that feelings are a weak thing, he does't want to be part of this. Trigon, despite his interest in Arella, has appeared toxic, but he rejects any feelings.

“Trigon was looking at me, desire. The years that I stayed with him, I couldn't understand him well. But he was so bossy, I was patient with him. I wanted touch his feelings but I couldn't, in fact, he didn't show any feelings. But I was sure that he did not want to show his feelings.“ Arella talking about Trigon

Arella's feelings for Trigon are tense and confused.  Arella, she wanted the love, later became only wanting hope from him. As she cried in The new Teen Titans (1980), she said: "I above all, know the full extent of Trigon's madness and only I have seen how truly evil he can be!."  She was very sad for Trigon's actions, Arella was trying to talk to him every time, but she got to nothing.

“Trigon once said he still wants me, for several years. I don't know what he meant, hard to understand Trigon. But he didn't try to kill me. I think he sees me as something he wants to own forever. It's kind of an obsession.  Trigon is emotionally unstable.”

In  Justice League vs. Teen Titans Raven told the story of her parents, mention was made, Arella was rebellious, and ended up with satanism. They wanted to give a bride to Satan, they thought the summons would not work; but the surprise was that they succeeded, instead of Satan, Trigon who appeared to them in the human form, Arella decided to marry him, indeed Arella went with him, and when they wanted to make love, he put her on the bed then he showed Arella his true demonic form and smiled, Arella was amazed!.

Arella after a while, she left the Satanism group and Trigon, not knowing what to do; but it was taken from the people of Azarath, Arella gave birth to Raven in peace there, when Raven became ten years old, she wanted to know who her father was, so she summoned her father to Azarat; at that moment Arella came to see, Trigon looked at her and smiled, Arella looked at him by begging not to harm anyone or take their daughter with him to the hell. But Trigon showed all his power and destroyed everything,  Arella's last words were her daughter's name.

TrigElla is quite a famous ship in DC Comics, but not everyone supports it. 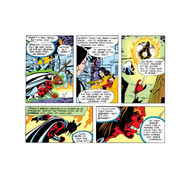 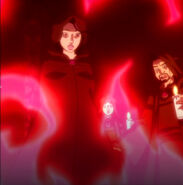 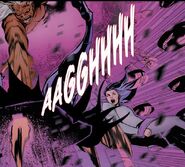 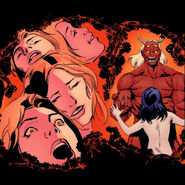 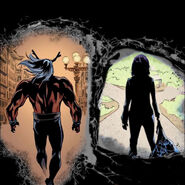