TsuChako is the femslash ship between Tsuyu Asui and Ochako Uraraka from the My Hero Academia fandom.

This section is in need of major improvement. Please help improve this article by editing it. Both of them had very lonely childhoods and care a lot about their families. Tsuyu spent most of her time caring for her younger siblings and had only one friend before attending UA. Ochako's family had very little money, and she wanted to come to UA to help her parents have an easy life.

As they are both close friends with Izuku Midoriya, Tenya Iida, and Shoto Todoroki, they are often found sitting next to each other at scenes set in the lunch room. During the sports festival arc, Ochako is impressed by how fast Tsuyu can move across a length of rope stretched over a chasm.

In the training camp, they work together to take down robots attacking them. Later, in the woods, Tsuyu holds Ochako's hand so that she won't be scared. When Toga attacks them, she seems jealous of the pet names they call each other. Tsuyu chose to use her quirk to send Ochako out of harms way before anything else.[1]

Ochako comforted Tsuyu after she was feeling guilty for not supporting their fellow classmates on their mission to go rescue Bakugou from the villains.[2]

Both Tsuyu and Ochako did their Hero Work-Studies with Nejire Hadou at the Ryukyu agency. This is where their super move, Meteor Frafrotskies, is first revealed. Ochako's quirk levitates debris that Tsuyu hurls at the enemies using her tongue.

In a practice rescue mission, Ochako is sent down into a ravine to comfort Tsuyu and levitate her up to the surface.

This section is in need of major improvement. Please help improve this article by editing it. TsuChako is the most written femslash ship for both characters and the second most written femslash ship for My Hero Academia, after MomoJirou. Both of these ships are especially popular among fans of Dekusquad as well as shippers of TodoDeku and KiriBaku, as it provides a way to pair off the biggest female characters.

Ochako's canonical interest in male characters such as Izuku is often interpreted as compulsory heterosexuality, although bisexual headcanons are not uncommon. In contrast, Tsuyu has a snarky attitude toward boys, such as Mineta, as well as a lack of a definitive male love interest. This has made lesbian headcanons for her ubiquitous. 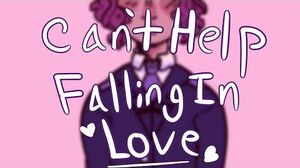 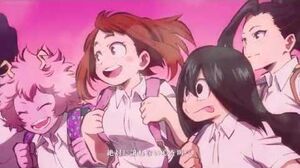 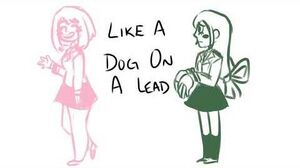 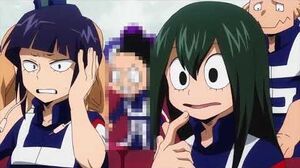 Tsuchako - l is for the way you look at me 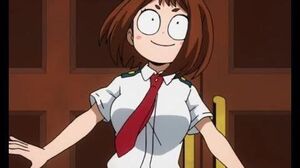 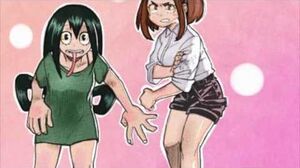 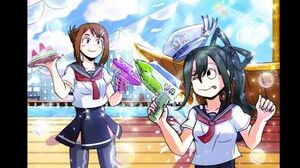 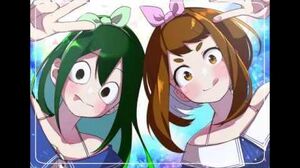 Ochako x Tsuyu My Everything 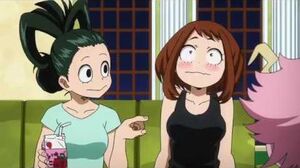 Retrieved from "https://shipping.fandom.com/wiki/TsuChako?oldid=237276"
Community content is available under CC-BY-SA unless otherwise noted.