Tsuguuji is the het ship between Korekiyo Shinguji and Mikan Tsumiki from the Danganronpa fandom.

Both Korekiyo and Mikan come from two different sagas in the series and thus have never interacted with each other in canon.

However, they share an interaction in Danganronpa S: Summer Camp. There, Korekiyo apologizes if his appearances frightens her, though she insists it doesn't. After mentioning his Sister is hospitalized, Mikan expressed an interest in taking care of her as the Ultimate Nurse. While thankful at first, Korekiyo changes his mind after Mikan becomes too excited about being needed for his sickly Sister, stating he could never ask her for the luxury of exclusively looking after his Sister.

Their motives to kill were very similar as well, both having an unhealthy attraction to a heavily implied abusive love interest. Junko Enoshima being Mikan's reason for her sudden behavior change and reason, and Korekiyo's Unnamed Older Sister. Both wanted to satisfy their love interests to the best of their abilities. In exchange, when they were both pointed out by the protagonists and classmates on how suspicious or them possibly being the killers, they both ended up having a nervous mental breakdown in-front of their classmates.

They also share a love for unsettling or things their former classmates found disturbing. Mikan enjoys horror movies, due to her enjoy the helpless victims, gore, and the act of revenge when the bully-like character gets put into a gruesome situation in them. Korekiyo has a fascination towards spirits and the supernatural, as he does believe in them as well. He also no issue or fear of death and murder, as he questioned his other classmates on why they did.

In addition, they're known to be one of the outcasts or avoided characters due to their off personalities and interests. Mikan's classmates often found her frame of mind to be unsettling, irritating, as well as her being bungling. Similar case was also met with Korekiyo's fellow members of his class, but they noted that he was more so just disturbing and creepy.

The ship is not at all as huge or known by other members in the fandom, due to them never interacting and not being in the same game. Korekiyo also isn't as of a popular character much like Mikan is either, but both have other respected and bigger ships than this one. Band Aid and Hinamiki for Mikan, and Amaguji for Korekiyo.

The was ship was sailed due to the similarities between the two, and their opposite like personalities. Mikan is seen to be stuttering through most of her words, has low self esteem, clumsy, while also having a strong side of paranoia take over her actions. Korekiyo, on the other hand, is mostly known for his intelligence, calm level-headed, and has a more "kept to himself" personality.

Most fans of the ship seem to see both of the two understanding each others situation, helping each other through their feelings, whilst gaining a healthy relationship with each-other. 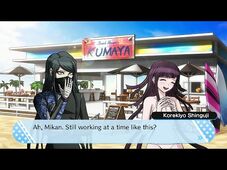