• Night and Day Duo
• One Head Taller
• Rivals to Lovers

TsukiHina is the slash ship between Kei Tsukishima and Shōyō Hinata from the Haikyu!! fandom.

Tsukishima and Hinata are both first year middle blockers in the Karasuno High School Volleyball Club. They first met when they joined the said club, and have kept a sort of rivalry relationship ever since.

Tsukishima often picks on Hinata for his height, actions or way too active personality. When they first encountered each other, Hinata expressed how much passion he had for volleyball, which annoyed Tsukishima at that point in time as he still had his mindset of the team just being a club and nothing more.

Over the course of the series, they learn to respect one another and even work together as they are both regular players on the court.

TsukiHina is a rather known rare pair. The two featured in the ship have more popular ships, KageHina and TsukkiYama, though TsukiHina can be shipped along with YamaYama.

The fans like to keep to the contrast of moon and sun in many pieces of art and writing. A lot of fanfictions also involve Yamaguchi having unrequited feelings for Tsukishima, sometimes being a past relationship of Tsukishima or even being a rival for Hinata. The same counts for Kageyama having feelings for Hinata.

Tsukishima is a Tsundere which is a character development process that depicts a character with a personality who is initially cold, and hotheaded (and sometimes even hostile) before gradually showing a warmer, friendlier side over time. Yamaguchi earned his friendlier side since they've been friends for a long time. He would smile and but hasn't seen him laugh genuinely for what I have seen in the anime.

In fanworks, Tsukishima has shown his soft side to Hinata privately, because Tsukishima doesn't want to show it to everyone in which Hinata complied. So they have been meeting secretly without anyone knowing. 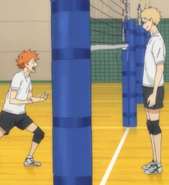 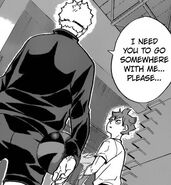 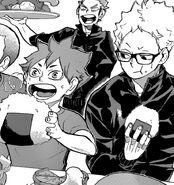 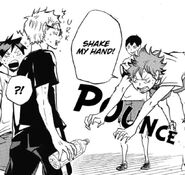 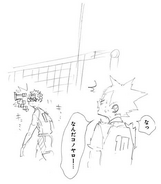 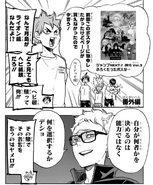