“He's a man who walks ahead of me.”
— Tsukishima about Yamaguchi.

TsukkiYama is the slash ship between Kei Tsukishima and Tadashi Yamaguchi from the Haikyu!! fandom.

Tsukishima and Yamaguchi are both first years and members of the Karasuno High School volleyball team. The two first met when they were in primary school, Tsukishima standing up to those who were bullying Yamaguchi for having freckles. They later met again when joining a volleyball team as children and their friendship developed from there.

Yamaguchi refers to Tsukishima as "Tsukki," hence their ship name. However, it's known that Yamaguchi used to call Tsukishima "Kei-kun" when they were children. The two have a very close bond and are in the same class as well. It is noted that Yamaguchi is also close with Tsukishima's older brother, Akiteru, as they call each other by their first name. They are also seen eating lunch together on multiple occasions. Yamaguchi frequently apologizes to Tsukishima, even if something doesn't warrant an apology, "Sorry, Tsukki." becoming something of a catchphrase for him.

Especially in the beginning of the series, Yamaguchi usually just follows Tsukishima. Over the course of the manga and anime, Yamaguchi works himself up to Tsukishima's side however, which Tsukishima acknowledges and even sees Yamaguchi as further ahead of him due to his hard work and dedication.

Yamaguchi's and Tsukishima's first and so far only fallout was during their Tokyo training camp. Even before that, Yamaguchi noticed that Tsukishima wasn't taking training and volleyball seriously. It's implied to be caused by an incident several years earlier with his older brother, Akiteru, who lied to Tsukishima for a number of months that he'd gotten onto the Karasuno volleyball team, only for Tsukishima and Yamaguchi to learn it was false when they went to attend a game and found Akiteru sitting in the bleachers rather than playing. This may have contributed to Tsukishima's cynicism about the game and his internalized fears that the effort would not be worth it.

This lack of commitment is at its peak during the training camp, which doesn't go unnoticed by Yamaguchi. Thanks to Hinata, Yamaguchi builds up enough confidence to finally express his anger and him trying to convince Tsukishima to take the club seriously. They end up having an argument, Tsukishima being of the opinion that it doesn't matter if you try hard, you will lose anyway at some point. Yamaguchi snaps and yells at him that pride is enough of a motive for working hard. Tsukishima seems shocked by this, but realizes he's impressed by Yamaguchi's growth, smiling genuinely as well and tells Yamaguchi that he's become a really 'cool' guy. With Yamaguchi's words leaving a lasting and big impression on him, Tsukishima decides to take Yamaguchi's words to heart when talking with Bokuto and Kuroo in the third gym, who agree to help him with some training. Tsukishima starts to work harder and more passionately for volleyball and begins to get along better with his brother, Akiteru, after this.

In Chapter 298 they successfully pull off a "Serve and Block", which was a key moment in their relationship. The chapter focuses on their relationship, past together, and shows how much they've grown. They both high five after their victorious combo, Tsukishima genuinely smiling while doing so. Their friendship remained steady since then.

During that arc, Tsukishima, proud of Yamaguchi's growth as a volleyball player and as a person, says that Yamaguchi "is a man who walks ahead of me."

Spoilers for the end of the manga:

In their third year, Yamaguchi becomes team captain and is seen in a photo next to Tsukishima, along with Kageyama, Yachi and Hinata.

Post timeskip, they are seen to still be close and living in Sendai, Tsukishima playing for the local team, the Sendai Frogs, and doing museum work. Yamaguchi working for an electronics company. They seem to frequently go for drinks, lunch or dinner together and Yamaguchi teases Tsukishima at dinner once for not wearing a sparkly pink souvenir shirt Hinata got him from Brazil.

Additionally, Yamaguchi states that he wants to go to "all of Tsukki's games".

In some of their final panels where they're seen together, Yamaguchi and Tsukishima are seen walking with Yachi, Hinata and Kageyama after the MSBY Black Jackals vs. Schweiden Adlers game, and appear to be joking around with them.

TsukkiYama is the fifth most popular ship within the fandom and the most written ship for both Tsukishima and Yamaguchi. It is regarded as a very healthy ship, the connection of them being close and childhood friends, as well as their current character development building of of each other's support and guiding giving them no problematic aspect. Adding to the health aspect, their general aesthetic in the fandom is very endearing, supportive, loving, "soft" and also "fluffy"

TsukkiYama is often portrayed as the moon and the stars. Tsukishima's name meaning "Moon Island" and being also canonically shown as or at least with the moon. Yamaguchi doesn't mean stars and hasn't been shown to represent them, but a lot of fans love this concept. This is due to him always being around Tsukishima, like the stars around the moon, and his freckles as well, which are considered to "look like stars" by fans and Tsukishima in fanfictions.

In most fan pieces, Yamaguchi is often the first one to realize, or develop, feelings for Tsukishima. There are many fanfictions and artworks of Yamaguchi's love actually being unrequited, however, in most cases Tsukishima secretely returns the feelings and they work it out. A popular trope in fan works for TsukkiYama is also angst. A lot of it deals with Yamaguchi's insecurities from the canonical content, especially about his freckles.

Tsukishima has also complained that he doesn't like beer (post timeskip) and only prefers kahlua and milk as an alcoholic drink, which plays into the theory that he has a hidden sweet tooth. In canon, his favorite food is strawberry shortcake. Yamaguchi's favorite food is soggy french fries. These foods have often featured in fanworks with the pairing.

Tsukishima is usually portrayed more of the dominant one in fanfictions, due to his more cold, collected and blunt personality, as well as him being taller than Yamaguchi. Additionally, Yamaguchi possesses milder traits, such as a sensitive, shy and anxious nature, while also being a more bubbly, open and generally more joyful person than Tsukishima.

But, in some cases Yamaguchi is portrayed as the dominant one, the scene where he gets angry at Tsukishima is one of the main ones that fan's like to use for inspiration, flashbacks, and even the perfect moment to make Tsukishima appear flustered in fanfictions or doujinshi. Which although not necessary, all fandom's and ship's have this side to them.

However, TsukkiYama is a widely balanced ship with many fans indeed having a preference for dominance, but not minding each concept.

Yamaguchi – “Tsukki, wait up! Is something the matter?”
Tsukishima – “Guys that get worked up really get on my nerves”
— Yamaguchi worried about Tsukishima in The Formidable Ally

Yamaguchi – “Motivation? What do you need more than pride?!”
Tsukishima – “I never thought I'd see the day...Just when did you become such a cool guy?... You're really cool.”
— Tsukishima after Yamaguchi goes off on him in Illusionary Hero

“I never thought for a single second that I would be able to win by myself.”
— Tsukishima to Kuroo, Yamaguchi standing behind him.

“I can think of a lot words but uncool definitely isn't one of them!”
— Yamaguchi to Tsukishima as he was about to say "I'm so uncool"

“Hurry up, Yamaguchi. I'm gonna lock you in.”
— Tsukishima

“Are you stupid?”
— Yamaguchi to Tsukishima 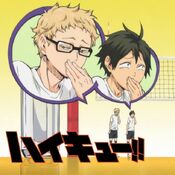 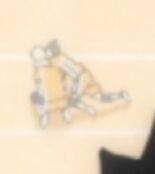 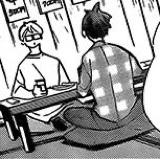 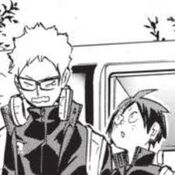 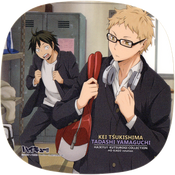 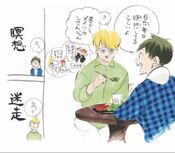 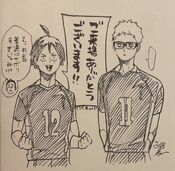 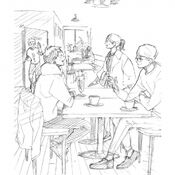