“That's why Bubaigawara was such a great guy. At heart he desperate to be a help to others. I also want to be like that”
— Keigo Takami talking about Jin with Best Jeanist, Chapter 299

JinKeigo is the slash ship between Jin Bubaigawara and Keigo Takami from the My Hero Academia fandom.

The flashbacks of Keigo and Jin's pasts shows that the two didn't have easy lives and how it lend them on the hero and villain paths they took. Even though Jin's parents were killed by a villain, the traumatic event of his self copies turning on him was the staring point that led to him becoming a villain. Just as Keigo's villain father being arrested by a hero and chose to use his feathers to save lives begin his path of becoming a hero. Similar to how Keigo is a high ranking hero, the Meta Liberation Army had Jin becoming one of the nine lieutenants of the Paranormal Liberation Front. This shows that the two are similar, despite the fact that their hero and villain paths makes them enemies.

Jin meets Keigo when the hero was tasked by the Hero Public Safety Commission to infulata the League of Villains. Because Touya vouched for Keigo and has passed the tests that Touya set up to prove the winged hero's loyalty to the League, Jin believes that Keigo can trusted and welcomes him to their cause. Even though Jin has joined the LOV with good insertions to create a better world, Keigo knew that the world that Jin's fellow villains wish to build will be a dark one and as a hero he is duty bound to keep them from making their ideal world a reality. When Keigo isn't gathering intel on the League and its members, he spends time with Jin, as the hero helps the villain to better understand the more complex themes that surround Destro's ideology, along with him giving Jin some friendly tips on how he can speak to the soldiers under his command. To make sure that Jin trusts him enough with the secrets within the League, Keigo tells Jin that he too disagrees with the current hero system that has made him feel trapped and is someone who prefers to fly free, as well as him never having a sense of belonging. Believing Keigo' lie has led to Jin viewing the hero as a friend he can relate to, from the time he lost his place in the world until he joined the LoV. Along with Jin pitting Keigo and wants to free him from the chains of the Hero Society so they can both fly free together.

It didn't take long for Keigo to expect Jin as a friend of sorts as well, once the winged hero realised that Jin is a good person at heart. Despite the fact that Jin is a villain, while he is a hero who was sent to take Jin and his allies down from the side in. This is why Keigo felt bad about him using Jin to gain the information he was tasked to gather for the Hero Public Safety Commission. Whenever Jin's back is turned on Keigo, the hero begins to smile sadly at his new friend. Knowing that Jin will defiantly feel betrayed when he learns that his new friend is a mole. Even though their discussion on the nature of Jin's quirk and the theory of how he can expand on it, got Keigo to realise that it makes Jin one of the most dangerous villains within the League, should he be successful in uncovering away for him to create multiple High-End Nomus.

When the heroes attacked the Paranormal Liberation Front, Keigo knew that it was time for him to blow his cover so he can aid them. Knowing that he'll have to tell Jin the truth when he confronts the villain, Keigo decides to Jin a chance that might allow him to gain a lighter sentence. Even though Keigo has connections, he doesn't have the power to keep Jin from a life in prison. After Keigo tells Jin his true motives for "joining" the league, he asks the villain to not to resist him when he hands him over to the police. While reassuring Jin that he does understand the tough situation he has got himself it, knows that Jin is instead a good person and how he wishes to help the villain to get back on his feet, after he has served his time. Jin on the other hand was too hurt by Keigo's betrayal and didn't like the fact that Keigo called him "unlucky," as the bond he has formed with the league has made him feel like the luckiest person in the world. Not wanting to betray his LOV family, like the way that Keigo has betrayed him, Jin prepares himself to attack the hero he once saw as a friend, while Keigo tells the villain to stop his attacks and that he doesn't want to fight him. Even though Keigo had no trouble with taking down Jin's many clones, no matter how many Jin sends his way.

Despite the angry that Jin feels towards the Hero and Keigo coming to the conclusion that one of the will end up dying in their battle, as both Heroes and Villain don't give up until one of them falls, he still wants to help him. Even if it means injuring Jin in order to keep him from escaping. After delivering the blow to keep Jin down, Keigo gets attacked by Touya who arrivals to aid his fellow villain. Even though he was injured, Keigo manages to save Jin from Touya's flames. Touya mocks Keigo for saving the villain he attacked. As Touya helps Jin to escape, Keigo knew that his mission requires him to do whatever it takes to keep Jin from alerting the other villains about him being a mole. Along with the fact that Jin is too dangerous to remain free. This is why he was forced to kill Jin when the villain was in the middle of creating one of his self clones. Keigo' actions towards Jin led to him getting attacked by an enraged Touya, while the last Jin clone got away and warns Himiko and Atsuhiro about the winged hero who killed the original Jin Bubaigawara.

Because Keigo' damaging heritage was used as an "expansion" as to how he was able to kill Jin in Touya's hero damaging broadcast, as it shows a edited recording of Keigo stabbing a defenseless Jin in the back to make the hero look worse, Keigo was forced to hide his face from the public. He took no pleasure in killing Jin and after Tsunagu accompanies the injured hero to his mother's house, Keigo tells the other hero that Jin was such a great guy. Along with how he wants to be like him, since his mission for the now shut down Hero Public Safety Commision is the reason why he was forced to kill Jin. Now that he is free from them, Keigo wants to be a help to others, like Jin did before him.

“That's why Bubaigawara was such a great guy. At heart he desperate to be a help to others. I also want to be like that”
— Keigo Takami talking about Jin with Tsunagu, Chapter 299

Despite the fact that Keigo ends up killing Jin, it doesn't change the fact that the hero had wanted to help the villain once he realized that Jin isn't a terrible person. This has inspired fans to support the ship and created a headcanon AU that has Jin expecting Keigo's offer, before they fake the villain's death so Keigo can help him to start over once the League has taken down.

TwiceHawks is also the rival ship of Hot Wings and TogaWice. 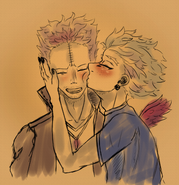 TouyaJinKeigo refers to the ship between Toya Todoroki, Jin Bubaigawara and Keigo Takami