Imposter – “Believe that hope lies beyond this point! That is your leader's order!”
Ibuki – “Oink! Oink oink, oink oink!”
Imposter – “...What was that?”
Ibuki – “I said "You're so cool!" in piggy-talk!”
— Ibuki after Hiyoko told her "Byakuya" only understands piggy-talk, in Chapter 1 of Danganronpa 2.

Twobuki is the non-binary/het ship between Ultimate Imposter and Ibuki Mioda from the Danganronpa fandom.

Ibuki admires Ultimate Imposter while they are impersonating as Byakuya Togami, thinking that they're very cool and reliable and she admires their leadership skills. They are sometimes a bit annoyed with her.

During Chapter 1, after their death, she states that she misses "Byakuya" a lot. In addition, during chapter 5 when she and the other deceased characters show up, she greets them by oinking and explaining that she said “You're so cool” in pig talk.

While not apparent in the game, many manga adaptations portray Ibuki with some sort of crush on the Imposter and she's often shown to be attracted to their heavy build. Though, it should be noted that the manga are not canon.

During one of the Imposter's campfire events in Danganronapa S: Ultimate Summer Camp, the two participate in a headbanging competition. The contest ends in a tie, and Ibuki warns the Imposter that she won't be satisfied with a tie the next time they compete, though she appears impressed at how well they were able to hold their ground against her. This prompts the Imposter to dream about their future.

The ship sailed mostly as a result of Ibuki telling the Ultimate Imposter that she finds them cool when the deceased students reappear at the end of Chapter 5. For fans who have also read manga adaptations, Ibuki's implied crush on the Imposter presented in them also helped. Their dynamics as the "quiet boy" and "energetic girl" have also helped. It can be also seen as a "Pair the Spares" type of ship, as the two can be left unpaired in some shipping scenarios, especially if Ibuki isn't paired with Mikan.

The ship used to be quite popular during Danganronpa 2 era, as the Ultimate Imposter lacked ships back then. However, with Danganronpa 3 giving Twomiki some ship tease, this ship has been abandoned for the new one by some fans. Some have also forgotten about the ship or never even knew about its existence. 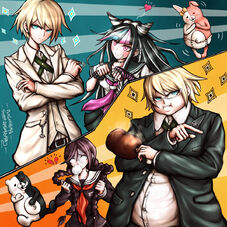 Mitwobuki refers to the ship between the two and Ryota Mitarai