• Lookalike Lovers — The Ultimate Imposter is often known to be in the disguise of Byakuya.

Twogami is the non-binary/slash ship between Byakuya Togami and Ultimate Imposter from the Danganronpa fandom.

The two never interact directly in canon. However, they have some indirect interactions or direct ones in the side materials and alternate-universe bonus modes.

In Despair Arc, it's reveal that the Ultimate Imposter was using the disguise of Byakuya Togami when enrolled to the Hope's Peak Academy. However, as he knew Byakuya would soon join the academy as well, he took the identity of Ryota Mitarai, which the latter agreed to, as it allowed him to focus on working on his anime.

In Danganronpa 2, the Ultimate Imposter's avatar is back to using the disguise of Byakuya Togami. Interestingly, Imposter appears to have a different impression of Byakuya. Under his disguise, he acts as a caring leader of the group, organizing a party in order to prevent the first killing and saving Nagito's life when the latter's about to be attacked with a knife. This is completely different from the usual selfish behavior of the actual Byakuya Togami in the first game. In his Free Time Events with Hajime, Imposter praises Byakuya Togami a lot of times, showing that he respects him.

In the finale of Danganronpa 2, when the real Byakuya Togami appears, Akane believes it's the Byakuya that she knew and pities him for being so skinny. Byakuya silences her, implying he isn't fond of having someone, especially someone fat, impersonate him.

Danganronpa: Togami is a light novel that focuses on the times of the Tragedy. During this era, the Ultimate Imposter, now a member of the Ultimate Despairs, impersonates Byakuya Togami to spread chaos in the world due to his influence, making him the antagonist to the protagonist of the novel, the actual Byakuya Togami.

In one of the events in Danganronpa V3's bonus mode, Ultimate Talent Development Plan, Akane once again confuses the two after the Imposter left and Byakuya appeared. Byakuya simply says she must have mistaken him with someone else.

In another event in the bonus mode, the two finally interact with each other directly. Byakuya is clearly not fond of the Imposter impersonating him and gives him an advice to at least lose weight while doing so. In yet another event where the two interact directly, Imposter admits he's probably doing a poor imitation of Byakuya and promises to reveal his true identity soon, which is alright with Byakuya.

The ship sailed as a result of the Ultimate Imposter using the disguise of Byakuya Togami. The fact that the Imposter showed a huge respect for Byakuya in Free Time Events with Hajime also helped. Furthermore, Ultimate Imposter lacked ships at the time, which made it even more popular. Nonetheless, the two are mostly shipped together as a joke. Both also have their more popular ships.

Byakuya – “Say something.”
Imposter – “The two who should never have met now cross paths...”
Byakuya – “Your appearance... Explain. Now. Are you the same as that Tsumugi girl?”
Imposter – “Allow me to warn you... Saying something like that near Tsumugi is sure to set her off. She says cosplay is different from wearing similar clothes and behaving like real people.”
Byakuya – “That's not the issue! You've got five seconds... If you've got an excuse, say it now.”
Imposter – “I won't make excuses...”
— Byakuya demanding an explanation from the Imposter about why the latter is impersonating him.

Imposter – “I understand it may be...unpleasant to have your identity borrowed by another person. I won't ask for forgiveness. I just want you to understand one thing. I did not take on your appearance to cause you harm. Byakuya Togami...the Ultimate Affluent Progeny. He who is fated to stand far above the rest... I do not know any identity besides that. That is all...”
Byakuya – “Did you really think I'd find that flattering? Someone as pathetic as you is an Ultimate?”
Imposter – “...”
Byakuya – “There are many fools who pretend to be part of the Togami family. They're all beneath me.”
Imposter – “...The Togami family? Then you—”
Byakuya – “Don't jump to conclusions...I'm not saying I condone you. Just that I'm going to ignore you. However...I will give you one piece of advice. If you're going to imitate me, lose weight.”
Imposter – “What!? To not understand the importance of fat... We will never see eye-to-eye, Byakuya Togami.”
Byakuya – “...Did you think even for a second that we could?”
— Byakuya and Ultimate Imposter about impersonating the former.

Byakuya – “And you plan on attending this party with my persona, don't you?”
Imposter – “It's true... I'm doing a poor imitation of you. You're not the type to run errands, are you?”
Byakuya – “Errands?”
Imposter – “I need to go out and buy some things we need for the party...”
— Byakuya and Imposter about running errands in another of their events in the bonus mode.

Byakuya – “...I deeply regret allowing you to dress up like me.”
Imposter – “No need to worry... There's only a small amount of time left. After tonight's party...I plan to tell everyone that I'm not really Byakuya Togami.”
Byakuya – “I like to think that not even these idiots are unaware that you aren't the real me.”
Imposter – “I know... They're all just humoring me. I need to be the one to put an end to it. I've done a terrible thing to you. But I thank you for putting up with it all these years. I guess this isn't something to talk about right now... Allow me to thank you next time.”
Byakuya – “It's fine, If you really want to make it up to me, you'll never imitate me again.”
Imposter – “Yes... Next time we meet, I'll apologize to you with my own face.”
— Imposter promises to stop impersonating Byakuya Togami in one of their bonus mode events. 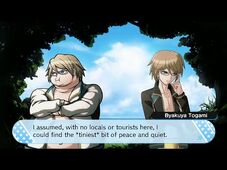 Twotogafuka refers to the ship between the two and Toko Fukawa