Twomiki is the non-binary/het ship between Ultimate Imposter and Mikan Tsumiki from the Danganronpa fandom.

In episode 5, after noticing Ryota Mitarai working so hard on his anime that he began neglecting his health, Ultimate Imposter forcibly takes Mikan Tsumiki and brings her to Ryota's room, knowing that thanks to her status as the Ultimate Nurse she'll be able to nurse him back to health and trusting her with his and Ryota's secret. She assumes that the Ultimate Imposter will either want to kill her or want sex in exchange for knowing too much, but the Imposter quickly assures her that they trust their classmates. Mikan begins to cry, saying no one has been this nice to her yet. As a response, Imposter tells her to have more confidence.

In episode 7, Imposter goes away with Mikan and pins her against the wall in a kabe-don fashion, in order to tell her about Ryota Mitarai's disappearance. Mikan promises to look for him, which eventually leads her to meet Junko Enoshima and Mukuro Ikusaba. Meanwhile, the classmates start wondering where the two could have gone, with Kazuichi Soda and Teruteru Hanamura having some suggestive ideas, which the latter shows with an example of a donut and a banana showing what they've could've been doing, which is neither of that.

In episode 8, after Mikan skips classes again, when Nagito Komaeda reveals he had seen her going to the west district, Ultimate Imposter reacts very aggressively, asking him if he's sure about that. Nagito himself points out he doesn't remember Imposter as this type of character.

Ultimate Imposter looks for Mikan along with the rest of the classmates. They are seen to be very worried about her, to the point of not being hungry, unlike usual.

In one event in the bonus mode of New Danganronpa V3, Imposter brings Hifumi Yamada to Mikan after the Ultimate Fanfic Creater was overworking on his doujins. They comment that they had Mikan help their friend (Ryota Mitarai) in a similar situation, meaning their friendship in this timeline is similar to the one from Despair Arc.

They also interact in another event of said bonus mode, where they prepare a party for their class. Imposter tells Mikan to just enjoy the party and mentions that they think all of their classmates are equal, including her, which touches her. When she leaves to go get the others, they tell her to be careful not to trip.

“Wh-What? Could this be... The kind of development that you can only show on late-night TV?!”
— Mikan after the Imposter takes her to Ryota's room in a bridal carry in the subbed version of Despair Arc's episode 5.

Imposter – “That isn't necessary. I trust my classmates.”
Mikan – “You trust me? Thank you! Thank you!”
Imposter – “Why should you thank me?”
Mikan – “Because no one's ever said something so nice to me before.”
— Ultimate Imposter trusting Mikan and her reaction to someone being nice to her.

Ibuki – “If you're looking for Mikan, she went somewhere with Ryota.”
Fuyuhiko – “Those two are pretty close lately, huh?”
— Ibuki and Fuyuhiko noticing Mikan and "Ryota" have been close lately, in the subbed version of Despair Arc's episode 7.

Kazuichi – “Right now, maybe they're...doing some "extracurricular studies" together...”
Teruteru – “Somewhere, in the school building, Tsumiki's doughnut and Mitarai's banana...are about to mee-”
— Kazuichi and Teruteru having some wild fantasies about the ship before Gundham's bear interrupts them.

Nagito – “What a coincidence! If you're looking for Tsumiki, I just saw her in the West District.”
Imposter – “Sure it was a West District?”
Nagito – “Huh? I don't remember you as this type of character...”
Imposter – “Ah! Never mind! Sorry! I got a little overexcited...”
— Imposter reacting aggresivelly when Nagito announces he saw Mikan after she had gone missing, in the subbed version of Despair Arc's episode 8.

Akane – “Hey, what's wrong, Mitarai? Are you hungry?”
Imposter – “N-No.”
— Imposter not being hungry, unlike their usual self, during the search for Mikan.

Kazutaka Kodaka's favorite scene in the seventh episode of Despair Arc is where the Ultimate Imposter pinned Mikan on the wall or in Japanese's famous term called as kabe-don.[1]

The ship sailed as a result of the ship tease between the two in Despair Arc. While Danganronpa 3: The End of Hope's Peak Academy is often criticized, the friendship and ship tease between the Ultimate Imposter and Mikan is one of the most well-received aspects of it. In spite of this, it tends to be forgotten by a lot of fans due to their ship tease moments being relatively minor, especially when compared to the main pairings of the series.

Its main ship rival is Twobuki, which some fans abandoned for this one, as a result of the more prominent ship tease between the latter in Despair Arc. Some fans are not able to choose between this ship and Mitworai and Mimiki or enjoy the dynamics between all three of them, resulting in Mitwomiki. 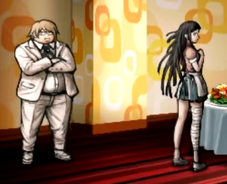 Mitwomiki refers to the ship between the two and Ryota Mitarai