Twoteru is the non-binary/slash ship between Teruteru Hanamura and Ultimate Imposter from the Danganronpa fandom.

The two don't get to interact much in Danganronpa 2: Goodbye Despair due to both of them dying in the first chapter. Ultimate Imposter orders Teruteru around before the party begins as he's the Ultimate Cook responsible for the food at the party. This includes getting rid of any dangerous item, such as an iron skewer, which saddens Teruteru as it means he won't be able to use some of the utensils. In fact, Teruteru ends up killing the Ultimate Imposter. However, he was not aiming to kill him and instead targeted Nagito Komaeda. The only reason why he ended up killing Ultimate Imposter instead is because the room was dark and because Ultimate Imposter shoved Nagito away, taking the hit in his place. Teruteru still respected the Imposter as the group's leader, and was distraught upon finding out that he killed him instead of Nagito.

In Despair Arc, Teruteru is shown feeding the Ultimate Imposter at their class's Christmas party, on one of the photos shown in the ending credits. In episode 5, Ultimate Imposter brings Ryota Mitarai Teruteru's food so that he'd stay properly nutritioned, saying that while Teruteru has twisted personality he's still a great cook.

In one event in Danganronpa S: Ultimate Summer Camp, Teruteru confronts the Imposter regarding their poor eating habits. The Imposter pushes back, but Teruteru promises that he will never let them go hungry. Later, in one of the Imposter's campfire events, Teruteru is seen cooking for them and calling them "my little angel" as a pet name.

“I see... In that case, eat. Hanamura's personality is warped, but the dishes he cooks are exquisite.”
— Ultimate Imposter about Teruteru in the subbed version of Despair Arc's episode 5.

With the popularity of victim-killer ships among the fandom, the ship sailed naturally as the two were a victim and killer duo of Danganronpa 2's Chapter 1. It was further fueled by the Ultimate Imposter being one of two "Big Eaters" of the cast, which is considered matching to Teruteru's talent of the Ultimate Cook.

While Teruteru's ships tend to be unpopular due to his perverted personality and the character himself being rather unpopular, this ship is fairly popular. The fact that Ultimate Imposter initially had very few ships may have contributed to this. However, it's still a minor ship and isn't the most popular one for any of the characters involved. It's also not popular among those who dislike victim-killer ships.

The fanart often references the two being involved in the same case as a victim and killer. Others may reference their status as a "Big Eater" and Ultimate Cook. They also appear together, along with Nekomaru Nidai, on one of the promotional arts. 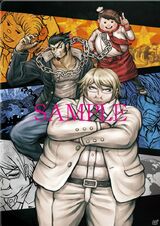 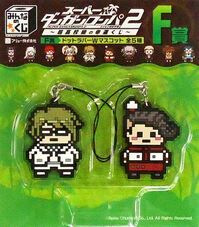